Grey-bearded old gamers love to spin tales of the glorious days back when playing a game meant running text adventures on a university mainframe.  Good times indeed, grandpa, but there’s a slightly less-grizzled generation of gamers who are too young to remember sneaking in a game of Zork between computer science classes.  This generation can still recall the many attempts to simulate computer adventure games, but without actually using a computer.  These often took the form of “Gamebooks” which used printed books to ape the basic mechanics of an interactive computer experience.  The Choose Your Own Adventure series were the most popular, but the genre of gamebook arguably hit its peak with the Sorcery! series.When the first generation of palmtop computers arrived over a decade ago, programmers almost immediately set out porting older computer games to run on the new PalmOS operating system.  Zork and the other Infocom text games have been a mainstay of palmtops and smartphones ever since.  Now that smartphones and tablets readily surpass the processing power of the old mainframes, these old games are not just getting ported, they’re being enhanced and modernized.

More Than A Port

The new iOS adaptation of Sorcery! takes the text, art and interactive choices from the original book and augments it with sounds, an interactive map, and a new combat system.  The result is an engrossing mixture of a text adventure and a visual novel.

Players take on the role of a fantasy hero armed with a sword and a spellbook.  They head out of their village on a quest to find a mystical crown and save their kingdom.  It’s stock fantasy gaming in many regards, but the joy of playing Sorcery! is the way that these cliché’s are explored.  The puzzles and mazes of a typical adventure game are rare, and players have a great deal of choice in what paths they take and how they interact with the people they encounter along their adventure. Thirty years ago this was unprecedented, and Sorcery! managed to include nearly as much player choice as many modern RPGs. 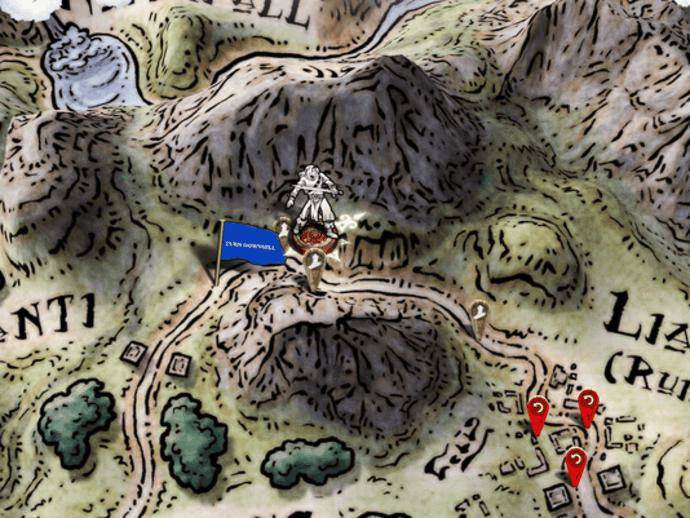 Players who want a quick story-based adventure can deliberately avoid combat, instead using stealth and diplomacy to make their way through most encounters.  More hardy adventurers can be aggressive, violent or even outright villainous in their quest.  The writing makes them feel like they have behaved wisely or courageously at each step, although a few choices will result in hints that there was probably a better way of handling the situation.

The original art from the books returns to show players the appearance of villages, monsters and villagers.  There is also an interactive version of the original map which allows players to choose their destination.  It’s much more engrossing than typing “Go West” over and over like in a text adventure, and it helps players keep track of all the possibilities that lie ahead (Or that can be revisited on their next play through).

The gamebook originally used several statistics and dice for combat.  In this iOS version, combat takes a more interactive form and uses a Rock/Paper/Scissors form of defense, and powered attacks.  Players choose a power level for their attack, and try to attack at a slightly higher level than their enemy.  Whoever is highest wins, but attacking at a slightly higher level than the enemy does extra damage.  A player who chooses to defend will build up extra power for their next turn, so the result is a simple system that requires strategy and pattern recognition.

The text describing these fights will offer hints about when it is best to defend and when players should launch powerful attacks, so literate players won’t have to bother analyzing attack patterns and can just enjoy the story.  Players have magic spells too, and these can be used at the start of combat to weaken enemies, or they can help solve puzzles in non-combat situations.

Running through Sorcery! multiple times yields very different experiences each time.  Unfortunately, players will feel like they need to do multiple runs, because it is a short and easy game.  Plowing right through the quest and reaching the end will only take a couple of hours, and players who meet an unfortunate end can simply restart from any previous encounter they had and try again.

Of course the game is not intended to be blasted through.  This is a world to be savored and explored, with each village and dungeon holding its own share of mysteries and adventures.  Early encounters can yield important clues and treasures that only have significance later on, so it is wise to thoroughly explore locations and answer every call to adventure.

However no matter how many times adventurers play through this app, they will still find that it is only the first part of a four-part story.  As with the original series of gamebooks, Sorcery’s story will be divided among several installments with the next one coming this Fall as a separate app.  Luckily players’ progress can be saved so that they continue the adventure with all of their loot in the next stage.

Sorcery! is a nostalgic experience for gamers who once spent their time flipping through the pages of those old gamebooks.  For younger gamers it’s still an intriguing adventure and an excellent first step into the world of classic adventure games.