You’ve proably heard of Rogue-likes, but have you ever heard of a Snake-like? Unlikely. Obviously someone played a lot of Snake a child and thought ‘You know what would make this better? If it had some light RPG elements!’ And so it was that Nimble Quest was born.

If you are familiar with the old game Snake, then you know what to expect at the base level of Nimble Quest. In Snake, you started as a tiny dot and you grew as you ate food until you filled the screen, essentially fl0w as played on the Atari. Once you crashed into your tail or a wall, the game was over. 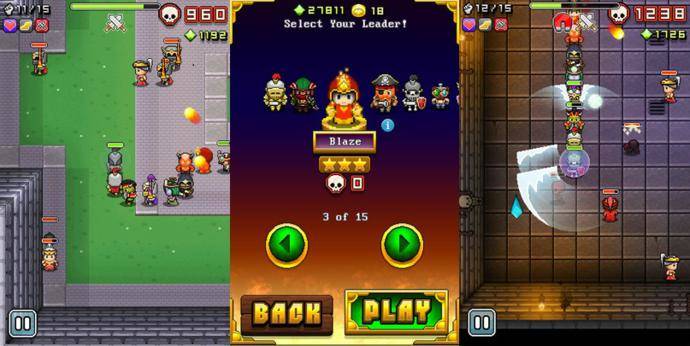 In Nimble Quest, you start out as a single hero. As you walk around the screen you change direction by swiping, and you attack enemies when they are in range of your attacks, which vary depending on the hero you chose at the beginning of the game. Getting hit by enemy attacks reduces your hp, while running into anything kills you instantly. As you kill enemies they drop money which can be used to increase the duration of powerup items that enemies also frequently drop when killed. Occasionally, however, a killed enemy leaves behind a new hero unit. Once you grab the new hero they fall in line behind you, adding to your firepower but increasing the length of your train. Once you are trailing a long tail of heroes, it can become difficult to avoid crashing into your own tail and killing off the heroes following you, but that’s all part of the fun.

I was originally drawn to Nimble Quest because of the excellent Super Nintendo era graphics. Every sprite and every background look like they could have been taken directly from The Legend of Zelda: A Link to the Past. There is no doubt that the developer has great love for the 16-bit generation because the care taken to accurately represent the look and feel of that time period are expertly recreated. Unless you are inexplicably turned off by Super Nintendo style graphics (blasphemy!) you’ll likely be as entranced as I was.

In keeping with the 16-bit aesthetic, the game features some excellent era appropriate chiptunes. The music does a good job of making you feel like you are playing a 16-bit adventure RPG, even though you are just running around a field avoiding obstacles and attacking enemies. The sound effects are decent enough, and they accurately reflect the types of sounds we heard back in the mid to late 90’s, but they are largely forgettable.

Nimble Quest is a simple idea, but one that manages to be fun and addictive for short periods of time. You probably won’t have any four hour marathon sessions, but as a mobile game to pick up and play for a short while as you pass the time on a bus or in a waiting room, Nimble Quest is great fun. The game is free on the App Store, so go download it and get your own hero train rolling!