There are thousands upon thousands of developers and publishers selling their games and apps in Apple’s mobile marketplace – but there’s only a few handful of those companies whose every release piques the interest of hardcore iOS-heads. Illusion Labs is definitely one of these companies, the minds behind App Store classics like Touchgrind (and Touchgrind BMX), Labryinth 2, the memorable puzzle-platformer Blast-a-Way – and their latest creation that quietly released earlier this month, an addictive little platformer called Mr. Crab.

At its very core, Mr. Crab is an auto-platformer, meaning players don’t have direct control over Mr. Crab’s speed and movement. A player’s control is limited to his legs, with a simple tap on the screen to make him jump over various obstacles and enemies standing in his path. It’s quite simple in its construction, and for good reason: the ingenious level design provides all the challenge one will need.

There are 44 levels in Mr. Crab, each one built on a progressive vertical plane. Players start at the bottom, moving up and across the circular pathways leading to the exit at the top of the contraption. The goal is to make it to the top as quickly as possible, knocking out enemies and finding all the baby crabs hidden throughout the level, collecting points and discovering short cuts along the way. 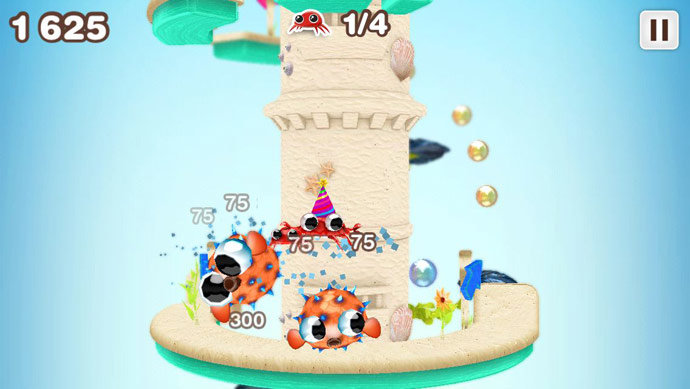 What makes Mr. Crab so much fun is how it takes simple concepts and turns them into complex situations: jumping around the first few levels will seem quite simple, but the game starts throwing logical curveballs at you right away. Mr. Crab only runs in one direction, changing directions only when he runs into a wall, which means there are many different options to completing a level, giving players the freedom to explore in all directions as they climb from platform to platform.

There are more subtle elements added to the game as players continue (and a three-star rating for each level to achieve), but the game smartly never strays from its core concepts, allowing the fast-paced platforming to speak for itself. There are even boss levels thrown in for extra challenge, where players have to avoid and attack an animal constantly moving around the spherical stages, a nice change of pace from the normal, timing-dependent gameplay.

Aesthetically, Mr. Crab is everything one would want from a casual platformer: the art design is sharp, charming, with an unobtrusive soundtrack, free of annoying sound effects or blaring, overcompensating music. There is a typical ‘cute’ sensibility to the art design; the different level themes include underwater worlds, forests, and a volcano, complete with their own big-eyed, adorable enemies to stop on (plus, Mr. Crab wears a sombrero – who wouldn’t want to play as him?). I wouldn’t say there is anything particularly memorable or original about the game’s look or sound, but it’s definitely relaxing, absent of flashing special effects and repetitive animations.

For a casual one-button platformer, Mr. Crab is a deceptively complex little mobile game – and more importantly, one that’s a ton of fun to play, especially in quick bursts of one or two levels at a time. Mr. Crab is an easy recommendation to casual gamers of every age, and one even the more dedicated types will want to check it out (plus it’s free of in-app purchases; who doesn’t love a good iOS game without those?) for the advanced challenge it offers to platformer perfectionists.