50 is a simple game. Flick a coin down a wooden plank with painted numbers and make up to 50. No more, no less. Sometimes the numbers are in a different place, sometimes the surface area they cover is a little smaller and you’ll need to target more accurately, but for all intents and purposes, scoring 50 is all you need to worry about.

You use the touch screen to move the coin, and even when you’re setting up the shot the coin noticeably lags behind your movement. You can flick it towards the target, but there seems no rhyme or reason as to why the coin might suddenly fly off the table (in the opposite direction to which you flicked) or fail to move at all. 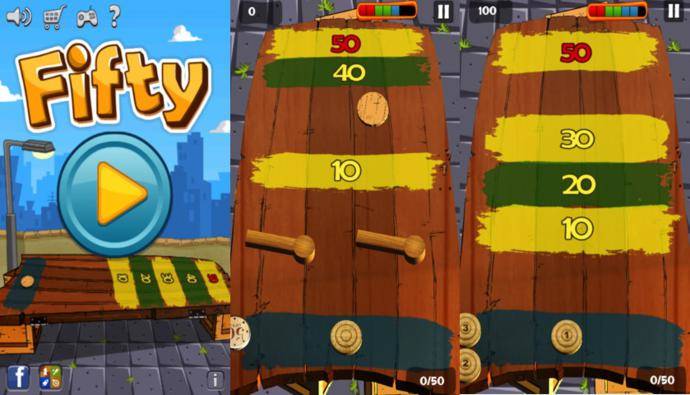 As you get further through the game’s many stages, you start to think that perhaps you’re playing the game wrong, but as you need more and more accuracy to hit that coveted ’50,’ the controls become more and more frustrating. Worse, the boxes for the numbers tend to be a little smaller than they appear on screen, so you might just hit a number, only to have it not count.

For a game with so simple a premise (and the potential to become quite addictive), it’s a shame that 50 falls at the first hurdle. Maybe if the game had spent longer in development, or even with a title update, this could become something on which to waste hours of your time.

There’s nothing wrong with the graphics – they get the point across and do so in a colourful manner. There’s only a few menus (which take a while to load) and then the wooden game board, which slightly changes each level.

50 isn’t a game I’d recommend you trying. It’s biggest plus – that it’s free – is let down by poor controls and a repetitiveness that probably wouldn’t exist if it played more like skill mattered. There are other games out there that have similar themes and, for now, you’d be better playing one of those.