Karting games, once only really the dominion of Mario and friends, are starting to get better. If you were going to make a racing game for your franchise, the chances were that it’d end up more South Park and less Crash Bandicoot. But as time has gone by, racing tie-ins have generally got better. Sonic’s All Star outings are the perfect example of that.

Garfield Kart is really the very epitomy of this new movement. Undoubtedly excellent on almost every level, but ultimately placed in rather a dull shell.

Garfield Kart is a pretty typical example of the karting genre. More arcade-based than most racing games, the target is to get to first place by any means necessary (even if it means flinging a pie at high speeds).

The graphics are great, but even on an S4 there were frame rate issues that slowed down the action

Slide round corners for speed boosts, pick up coins to unlock stuff and access a variety of deadly weapons and helpful power-ups to snatch victory from your familiar adversaries.

If you are at all interested in the Garfield brand, the whole gang is here. There are eight characters and sixteen courses, so there’s definitely a level of variety here that helps to boost replayability. Consider this is a mobile game, and you’ll almost certainly find yourself come back day after day. The size of the races and the way they’re laid out are perfect for a bus journey or a Mario Kart-inspired full-on gaming sesh. 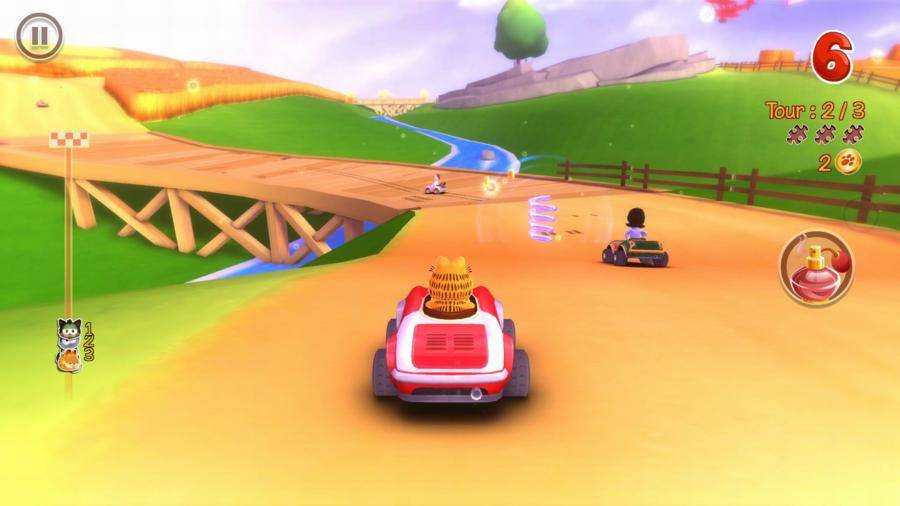 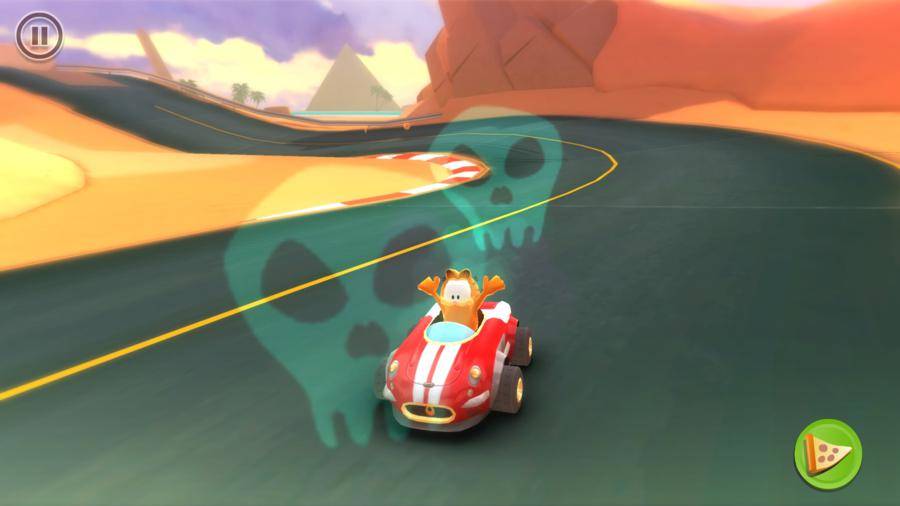 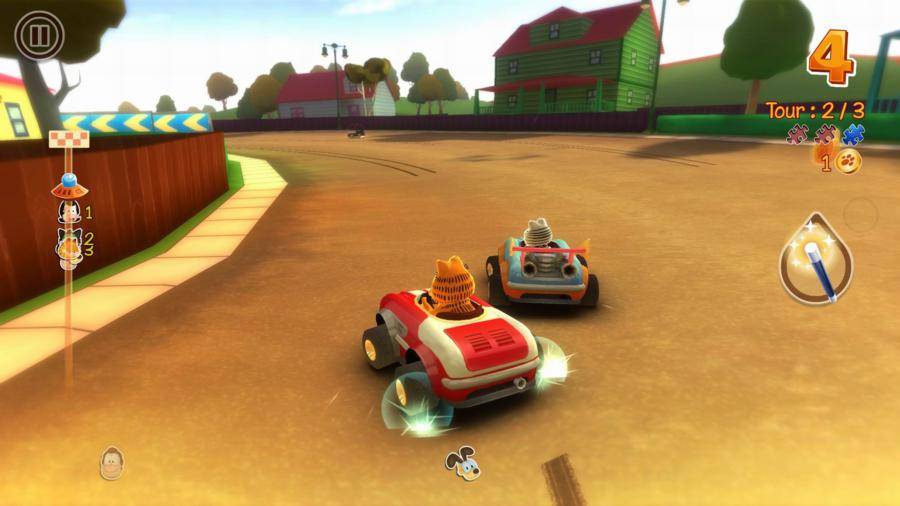 If you’re after the latter, it’s probably worth noting that the battery will disappear while you’re playing. The graphics are great, but even on an S4 there were frame rate issues that slowed down the action whenever all six racers were on screen at once or if there were multiple items in use, and it wasn’t long before the battery warning popped up.

Play plugged in to avoid having to miss calls all day.

What’s in a Slide?

The most important thing in a racing game is the controls, and Garfield Kart mostly has that covered. You can play with a set of virtual buttons, or you can use the motion. Motion is a little touchy at first, but you’ll gradually get used to it the more you play. There are still buttons to press for using items or breaking. Acceleration is done automatically.

The most important thing in a racing game is the controls, and Garfield Kart mostly has that covered

It’s all positioned rather nicely and you won’t have too much trouble with your fingers.

Things become more complicated when you factor in the use of the slide. Timed right, you can get a healthy speed boost and better control of your turn if you hold the slide button as you go round a bend, but timed wrong and you’ll end up going off the course and crashing into a wall.

The frustrating thing is that it doesn’t always feel like you have full control of a turn. Coming out of a slide feels a little mistimed, and you have to point your car a little unnaturally for the camera angle if you want to utilize this feature successfully. Which of course, you have to do, especially as you head towards the higher levels and into the online mode.

If you’ve ever played Mario Kart, you’ll be really comfortable with almost all of how Garfield Kart is structured. There are four championships within three different difficulty levels (50cc, 100cc and 150cc) and as you play through each, you’ll unlock new characters.

There’s also an online mode, but it’s not massively populated and I probably wouldn’t recommend relying on it for your purchase.

The problem comes, predictably, from the inclusion of in-app purchases. There are boosts that can make your game simpler (fair enough) but you also have to work to unlock things – including some of the championships in 100 and 150cc – or open your wallet and pay for them. This might be forgiveable, depending on your attitude towards IAP, if Garfield Kart was a free download, but it’s not. You need to pay to be told that you should pay.

Now, in all fairness, it seems you’d be able to unlock everything without cash, but having certain championships on certain difficulties behind a wall just seems to be locking content for the sake of locking content.

There’s nothing really wrong with Garfield Kart, outside of the IAPs that is. You’ll play it and you’ll have a good time. Certain design choices will make it less attractive, and the characters – while popular – aren’t going to be as widely recognisable to a casual Garfield fan as Sonic, Tails and co are to a casual Sonic fan.

You’ll come away having played a well made title, but you probably won’t feel too bad about replacing it with something else when the time comes, and you won’t ever look back.