Aliens Need Burgers has a goofy and semi-charming premise: aliens who love hamburgers come to Earth to relieve us of our beloved cow meat. Fortunately enough, there’s a satellite worker hanging outside the atmosphere in space, ready to defend the world from the incoming threats. Unfortunately, the game itself doesn’t employ any of this creativity, and Aliens Need Burgers is another forgettable touch-screen experience.

There are two modes to play in Aliens Need Burgers – one has a timer, the other doesn’t (it’s really that simple). The gameplay is akin to a simplistic Space Invaders; players have a satellite at the bottom of the screen and attack aliens coming in from the top, except the satellite doesn’t move. Attacking is a matter of tapping the desired alien to be zapped, continuing with wave after wave until overwhelmed by alien forces and the game ends.

And that’s just about it – the only ability, power-up, or gameplay ‘twist’ comes when tapping on other orbiting objects that give you extra lasers to shoot. Instead of tapping one ship at a time, players can drag their fingers across multiple enemies and the satellite will shoot accordingly. A nice little touch, but as the only varietal factor in the game, it quickly wears down the experience. 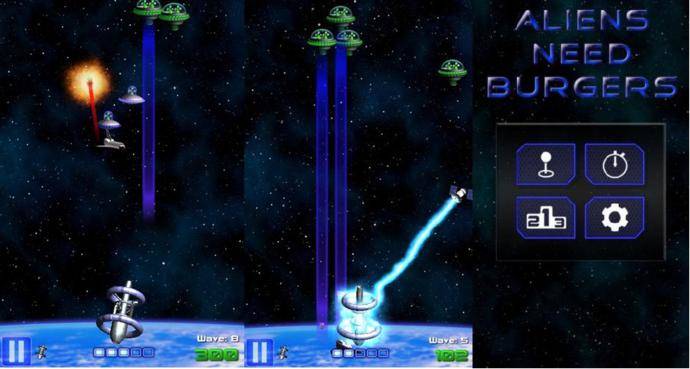 There’s just not enough to keep the experience interesting for more than 15 minutes (once you’ve seen the aliens try to steal a cow from the earth once, you’ve seen it all)– every game plays out with the same progression of wave difficulty and enemies, and there’s nothing ever presented to help the player turn the tide against the aliens. A skill tree with varied abilities and buffs would’ve gone a long way to helping this – as would more selection in art assets, especially enemies and level design (which is inherently non-existent: there’s only one ‘level’ to play in). Most of the time, it just feels like an extremely stripped down space shooter, and not an exciting one at that.

Although the gameplay is extremely tepid, the real disappointing thing about Aliens Need Burger is the art. After the uninspired, pixelated opening animation, players are greeting with a plain black star-laden menu screen, with ugly, low-res buttons for accessing the two modes and menu options. That same black background is the only level design, highlighted by a muddled view of the top of the earth, and some very forgettable art in terms of enemies and ship design (the white ship will never move or change during the game). This would be acceptable if it was at least Retina-capable, but it’s not even ready for Apple’s signature screens and, simply put, this makes it an unattractive game to play.

There isn’t a whole lot of ‘sound’ to talk about: a forgettable orchestral arrangement plays in the background, with a couple sound effects for lasers or explosions. It’s completely without personality, though, and doesn’t feel like there was much thought in creating an engaging audio/visual experience for the user, which makes an already mediocre title even less appealing to play.

Aliens Need Burgers is a game that suffers from a lack of creativity: everything in the game’s been done better and more robustly somewhere else, and there isn’t an engaging story or art style to keep dedicated genre fans interested past the five minutes it takes to see everything the game has to offer.