The massive and immersive world of J.R.R. Tolkiens Middle-earth series has spawned successful movie series, music pieces, toys, and several video games as well. The fantasy universe is both so immense and so detailed that each adaption has the opportunity to explore a different area and time period than the others. The newest variation to join this long line of success is the new action RPG game, Middle-earth: Shadow of Mordor. This open world fantasy extravaganza received great hype before its release date was even known, and the games arrival did not disappoint.

Whats In a Name?

The main reason that hype for Shadow of Mordors release was so intense was due to the franchises dedicated fan base. Attaching a Lord of the Rings title to any product seems to instantly gain the support (and inevitable judgment) of its loyal fandom. Releasing a modern RPG under this title created a lot of pressure on the developers Monolith Productions to create a game that could meet the fans extremely high expectations. Shadow of Mordor was released in late September of this year, and instantly gained quick favor for all that it offers. Quickly becoming arguably the most successful Middle-earth-inspired video game, Shadow brought in new fans who came for the game but stayed for the lore and world design.

Middle-earth: Shadow of Mordor takes place in the timespan between the events of The Hobbit and The Lord of the Rings Trilogy. The player controls a ranger named Talion who develops wraith-like abilities after a horrific encounter with The Black Hand that takes his familys lives. Using his new talents, Talion traverses the rough land of Mordor in search of answers and revenge.

The parkour movements offered in Shadow of Mordor are heavily influenced by that of the Assassins Creed franchise, a wise decision on the part of the game developers

Shadow of Mordor allows the player to control not only Talion, but his new wraith companion Celebrimbor as well now that the two have merged as one. The wraiths abilities allow Talion new powers such as a ghostly bow with striking precision and an ability to fall from great heights with no damage inflicted upon him. Talion himself is a skilled free runner and fighter who uses stealth and force at different points in his journey to defeat his foes. The parkour movements offered in Shadow of Mordor are heavily influenced by that of the Assassins Creed franchise, a wise decision on the part of the game developers. The game offers fun strategy ideas like knocking down bug nests to distract enemies and the ability to tame their wild Caragor (tiger-like) beasts. These clever bits make for dozens of different ways to approach any challenge. 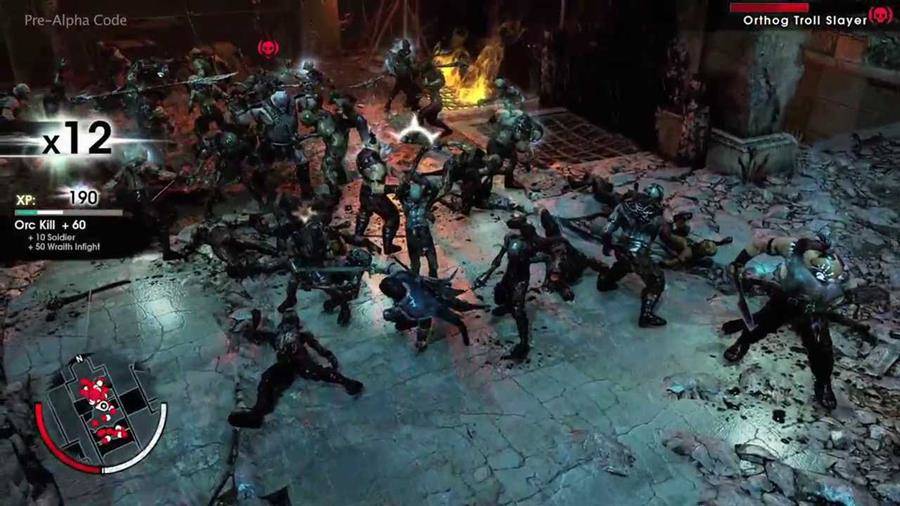 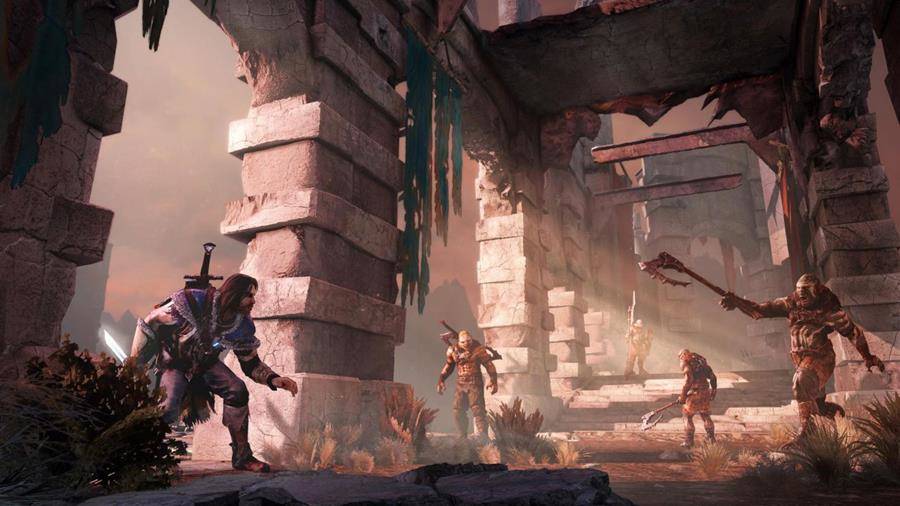 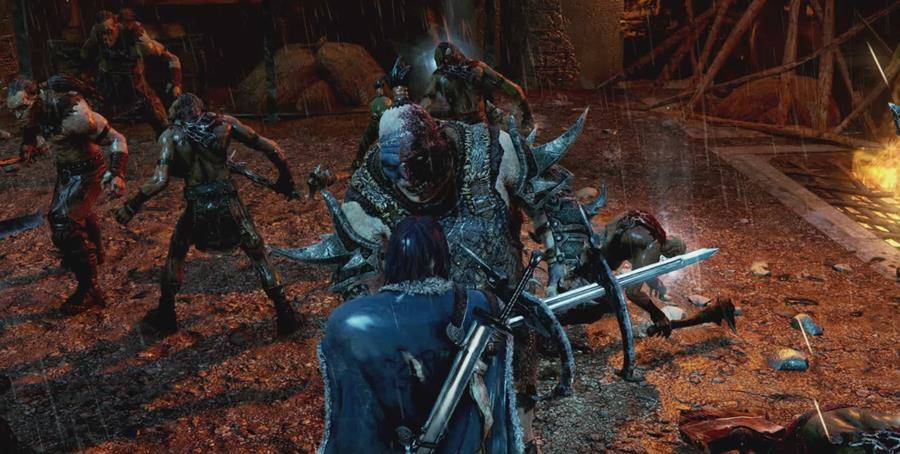 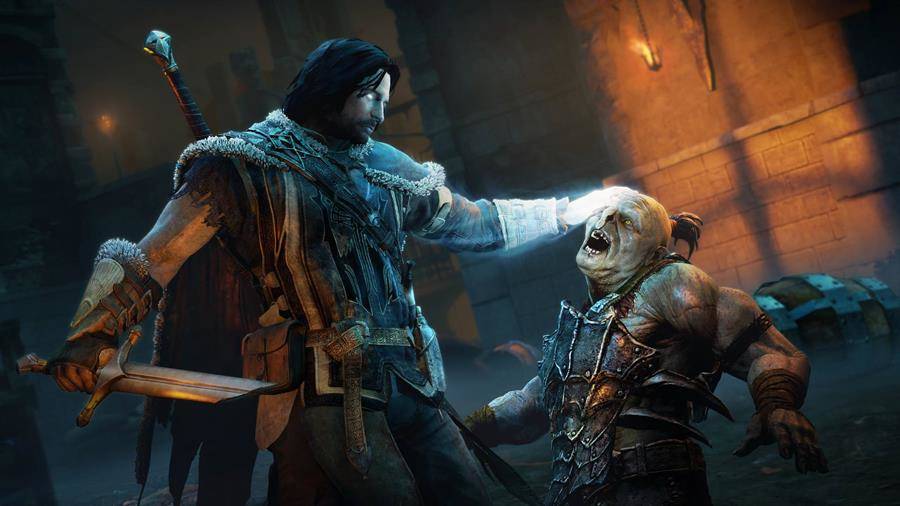 By far the most interesting and most successful element featured in Shadow of Mordor is that of the clever and engaging Nemesis System. As Talion makes his way through Mordor he faces a long chain of Uruk brutes that includes Captains and Warchiefs, all of whom (and their lackeys) want to see him dead. The player can view this chain of command at any time, setting certain leaders as their targets. The player can interrogate lower-ranking Uruks to gain intel on the higher-up bosses, such as their strengths and weakness on the battlefield. Using this knowledge, you take on different ranking leaders, eventually working your way up to the five Warchiefs. After each encounter with the Captains (and there can definitely be more than one at a time), a re-cap tells the player the results of the attack and who has survived. If a lower-ranking Uruk manages to kill Talion in the fight, he will find himself promoted, and therein the cycle continues.

This game ploy is both amazing and infuriating. A unique idea, it offers players a whole new strategy for an RPG, something that gives them a sense of accomplishment. Simultaneously though, after a single poorly planned encounter where Talion is killed, several Captains can be promoted, their power increasing with each promotion, and thus making the game much harder each time. This is truly a game that punishes the player for losing, as the game only gets more difficult the more you fail.

The Open World of Mordor

Operating as an open world RPG, Shadow of Mordor lets the player wander the map, heading in whichever story direction they want. There is undoubtedly a main quest to be followed, but a variety of other challenges are available as well. This helps to keep the game feeling elongated and sweeping, giving it more longevity in the end. These side quests range from weapon challenges for your dagger, sword, or bow and scrimmages between Captains that Talion can interrupt, preventing them from gaining power and influence.

The world is beautiful and well-thought out. Each Uruk has its own name, distinctive armor, and appearance, and clever dialogue. Mordor itself is dark and evil, and Talion stands out against it in strong contrast. The writing offered in Shadow of Mordor is also top notch with phenomenal voice acting to carry it through.  An exceptional game, Shadow of Mordor will certainly stand the test of time for its inventive new gameplay and homage to the franchise that helped create its initial buzz. A strong contender in the RPG arena, this game is a must have for any lover of the Middle-earth world, and will surely bring new fans in too.