What happens when you blend a puzzle game with adventure and stealth elements, a pinch of comedy, and a dose of noir? The answer is Gunpoint, a unique indie game that is impossible to be tied down to a single genre. This concoction of various ideas may sound like it would create too much dissonance to be fun, but everything comes together in perfect harmony to create a one-of-a-kind adventure.

It All Began With a Pair of Pants

In Gunpoint, players take on the role of freelance spy Richard Conway, who finds himself embroiled in a murder mystery after a strange accident involving a pair of super-powered trousers. Unfortunately for Conway, he is considered the prime suspect in the case and must work with some people who may or may not be trustworthy in order to clear his name. 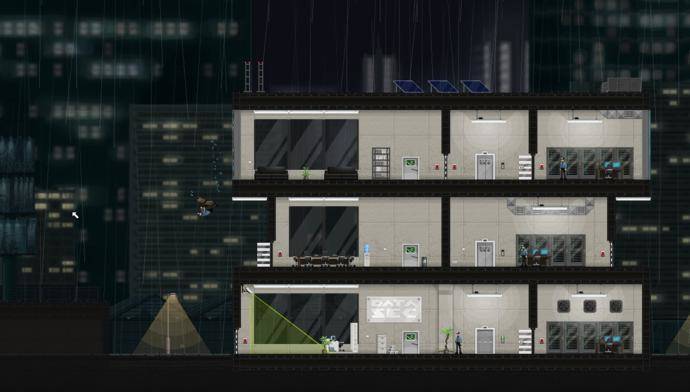 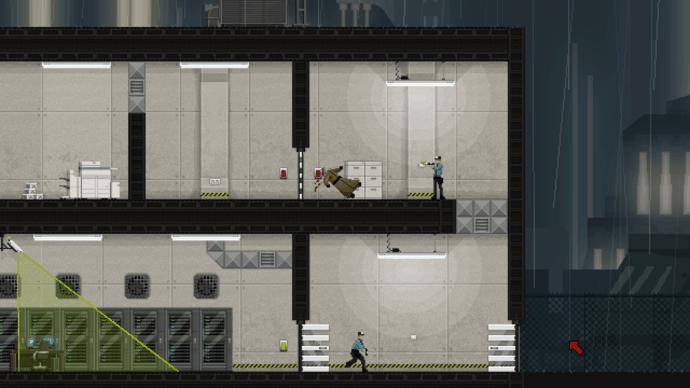 To find the real killer, Conway must delve into a conspiracy in order to find the truth. Gunpoint’s story is quite convoluted, but is never meant to be taken seriously – hence the super trousers. The entire story takes place on Conway’s phone through back and forth text messages between the characters and allows players to choose Conway’s dialogue.

This option gives the game a light create-your-own-story feature to the narrative. It ultimately doesn’t affect the overall story or gameplay, but because the writing is good and consistently funny, it doesn’t matter because of the entertainment value it provides.

Able to Leap Tall Buildings in a Single Bound

Humor also manages to find its way into the gameplay as well, though most of this humor will be unscripted. Every level requires Conway to infiltrate a guarded building to find an objective(or objectives) such as a computer terminal or another object of interest. The level design begins with small and simple buildings containing only a few underpaid security guards and steadily increases in complexity through to the end.

In order to get past security and complete the objective, players must use a mixture of various gadgets to elude the enemy. By holding the left mouse button, Conway charges his power pants and leaps over or onto buildings, giving him an amazing sense of mobility. This function works almost exactly like in Angry Birds in which the game displays an arched line.

By charging up a jump and taking aim, players can fly through windows, jump onto walls and ceilings, and tackle security guards. When a tackle is executed, clicking the mouse will make Conway knock out the guard with a solid punch. Players aren’t limited to the one punch and can continue pummeling the guard for as long as they like, though the game will neither reward or punish them for their actions.

The beauty of Gunpoint is there is more than one way to complete a level and players are allowed to be as creative as they want.

Conway is also a talented electrician who can rewire any electronics. After receiving the Crosslink gadget early into the game, players can access a secondary view of the map revealing the circuitry of the building. From here, all electronics can be rewired to get the jump on enemies.

Rewiring objects can take some time to get used to, but once the technique has been mastered, it leads to some satisfying, and often hilarious, results. Doors can be rewired to quickly swing open and knock out guards, electrical sockets can be booby trapped, and security cameras can be tricked into opening up locked areas. In later levels, in order to access certain circuits, Conway must first hack a node; this feature keeps the game fresh and makes it more challenging.

The beauty of Gunpoint is there is more than one way to complete a level and players are allowed to be as creative as they want without restricting them or holding their hands. There are a few levels with some restrictions to the player’s actions, but the levels are still expertly crafted.

Gunpoint’s difficulty curve is near perfect; the game starts off fairly easily and slowly ramps up to a challenging finale. It is never too challenging, even if Conway can only take one hit, because gadgets can be bought and upgraded after every mission. If the gadgets and upgrades aren’t suitable for the mission, then ability points can be reallocated and gadgets can be refunded for something different; this is a smart and thoughtful design choice.

Failure is an option in Gunpoint and the developers understand this very well. Death isn’t the end of the game, but just a minor setback. Dying prompts a small option menu with the choice to either restart the level or restart a few seconds before Conway’s time of death. This is also a much appreciated design choice considering how annoying it would be to replay one of the longer and more difficult levels after making only a single mistake.

In most games, screwing up normally isn’t the highlight of the experience, but losing in Gunpoint can be just as fun as perfectly executing a mission. It’s very hard not to chuckle after seeing Conway get blasted out of the air like a clay pigeon and slam into the concrete with a thud. The game even gives an achievement for knocking Conway out with a door he rewired himself.

Sadly, achievements are about the only reason for players to replay the game after the final stage. Unfortunately, Gunpoint takes only about three to four hours to complete and extended time is determined by the number of achievements left, or if the player even cares about achievements. There is a level editor, but maps cannot be shared directly because the game doesn’t have an online feature.

No Jazz, No Noir

Sadly, achievements are about the only reason for players to replay the game after the final stage.

Gunpoint’s noir style and retro graphics, which are reminiscent of a Sega Genesis game, come together to create a charming visual style bursting with personality. Noir is typically a shadowy, dark affair, but Gunpoint manages to wrangle in a wide range of colors without uprooting the theme. Audio is handled with the same amount of expertise.

The focus of the audio design seemed to go mostly towards the music, though the sound effects are good and get the job done. From start to finish, the game plays jazz music with a slow to moderate tempo and mixes in a little electronic music. Like the graphics, the audio perfectly fits the noir theme and is a joy to the senses; this is one of the few games justified to have a soundtrack bundle for a few extra dollars.

Gunpoint is a great game with unique, creative ideas and a fantastic presentation. Aside from the short length of the game and the inability to trade custom stages, Gunpoint is well worth the $10 for admission. Now if only someone could create rocket-powered pants like Conway’s. because those would be worth buying as well.