Action movies in the eighties were simple. There were two sides – good and evil. A large muscled man (quite often with only the smallest grasp of the English language, and I’m not just talking about Arnie) would fight “someone bad” while causing millions of dollars of damage, a couple of hundred explosions and spouting kick ass catchphrases.

It was an awesome time for movies.

Eventually the cheese wore off, and filmmakers began putting a little more character into their films, but in the transition something was lost. It’s that loss that resulted in, for instance, Trasformers.

With The Showdown Effect, Arrowhead and Paradox hope to bring back just an ounce of that bloody, quip-filled era and they succeed, from the heavy guitar riffs to the hilarious references.

If I were asked to sum up The Showdown Effect in a single phrase, ‘Smash Bros meets The Expendables’ comes to mind. There’s a great mix of different references to the great action heroes of cinema (and it doesn’t take long to work out who each is), and the combat is exactly as you’d expect. Over-the-top weaponry, terrible one-liners and the occasional grab and dive over a cliff. It’s really easy to pick up and the combat is surprisingly varied. 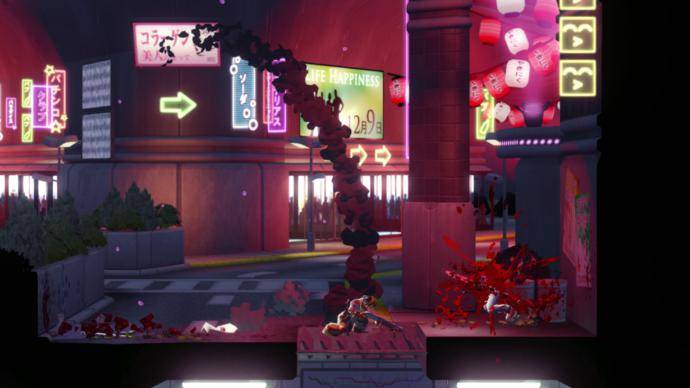 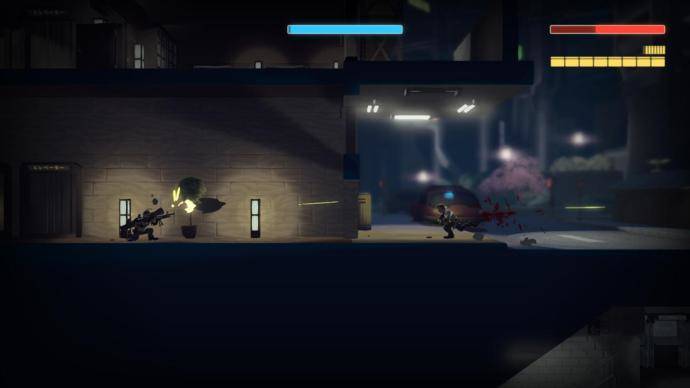 As you explore a level, you’ll find a variety of different weapons, from fire extinguishers to darts. Levels are huge – much bigger than in many similar brawlers – and you may need to explore a little to find an enemy. Rather than be an annoyance, this keeps you constantly on edge. When shooting at an enemy, you need to hover the mouse over that enemy otherwise you’ll miss (no simple shooting behind them here). You’re constantly looking out for the appearance of another player, hoping you can shoot them before they shoot you.

Although I love the base game, the fact that it’s online only causes some problems. For a start, there have been more than a few times in which I’ve had to wait up to ten minutes to get a game. On one occasion, the server disconnected part way through the match. I don’t know whether this is an issue of not many people playing (I believe the game is only available for those who pre-purchased it for the time being) or if it’s an issue of connecting people, but it makes investing in a match pretty hard-going.

There’s actually a huge amount of weaponry to unlock and each acts slightly differently. It’s always amazing to come across somebody who can really use an RPG or shotgun, but it’s not always so easy to do it yourself. To try out a weapon you’ll need to unlock it using in-game currency, which you’re rewarded with after every game. It doesn’t take long to save for something and everything seems quite progressive and fairly priced.

When you meet another player, the fight begins quickly. It really does end up like an action movie; hopping over rockets and jumping across huge chasms becomes a common occurrence. You must keep moving constantly, trying desperately to avoid the other characters mouse while trying to aim and move at the same time. After a few moments of startled panic, the samurai swords come out.

There are character clothing and weapon skins to unlock as well. The Showdown Effect will take a long time to get to 100%, and even then it’ll continue to feel fresh and fun online. Arrowhead plan to add new maps and characters over the coming months, although whether they’ll be free or paid has not yet, to my knowledge, been revealed. There is a store available for microtransactions, but a note when entering the store specifically says that nothing for sale will alter the way your character plays or give you an advantage online.

There’s also literally no learning curve. Actually playing the game is fairly easy – the controls are a little bothersome at times and it feels like, the targeting reticule aside, this is a game for controllers, but for the most part that’s easy to deal with – but you’re going to come across players that just dominate you from the very beginning of a match. On one hand this is very good, it’ll keep you on your toes, but it can also be a little demoralizing.

The Showdown Effect is a great, entertaining online game, but that’s all it is. While Magicka offered a single player story and had a multitude of online modes as well, you’re either going to love the online-only bloodbath or you’re going to find yourself getting bored. I can see myself returning time and time again, between other games (especially if they add a server browser or somehow decrease the wait time between matches).

The graphics in The Showdown Effect are very nice. The level design is varied, the characters recognisable (but not too recognisable) and it has one of the most interesting fog-of-war/light systems I’ve seen in quite a while. If you can see the light of the room, you can see the characters in there. It makes for interesting closed-off areas where it’s easy to spring ambushes, but it’s also a nice way of boosting the need to listen for your enemies as well as watch out for them.

More than that though, they’ve definitely managed to capture the eighties vibe, whether from the video lines on the screen during the menus, or through a reference to a famous film location.

The game opens with a fairly amazing eighties heavy rock riff. If you didn’t know what this game was when you bought it, you’ll find out within seconds of loading it up. The rest of the game doesn’t let down either. Characters sprout cheesy one-liners that’ll either make you burst out laughing or cringe (after winning a match, with the dead combatants around your feet – “and I thought I was having a bad day…”).

The Showdown Effect is a nice idea, made very competently, based on something that an awful lot of people love. It’s the very definition of “nailed it,” and the proof of that is in the fact that, asides from crappy servers/an apparent lack of players, there’s very little that I could suggest they build upon. Now they just need to polish and balance – and I need to practise – and this might just become another notch on the Arrowhead success belt.

It lacks a charm that made Magicka so special, but what it lacks in charm it makes up for in straight out bad-assery.