Artsy-smartsy games like Bioshock and Spec Ops: The Line have ruined video games. Nowadays players can’t just sit back and enjoy a game. Now they’re expected to look for symbolism and all that other tweedy intellectual stuff. LocoCycle is a game about a talking motorcycle that blows stuff up – or it might be an insightful deconstruction of the linear nature of video game narratives. The fine line between stupid and clever gets finer and finerer every year.

In LocoCycle players control a sentient high-tech motorcycle named I.R.I.S. and her hapless mechanic Pablo. Pablo’s pants have become tangled up in I.R.I.S’s wheel and he is dragged along behind her throughout the game. Early in the story I.R.I.S. gets hit by a bolt of lightning and her Artificial Intelligence begins to malfunction. She decides to ride across the continent so that she can attend a biker rally in Scottsburg, Indiana, dragging poor Pablo behind her all the way.

Is this goofy slapstick humor, or is it a metaphor for the way that that video games drag their players along towards whatever destination the designers have already chosen?

LocoCycle is a racing game, so players have limited control over I.R.I.S. They can only make I.R.I.S. move left and right along a straight highway while she proceeds inexorably toward the end of the level. It’s merely an ILLUSION of choice! 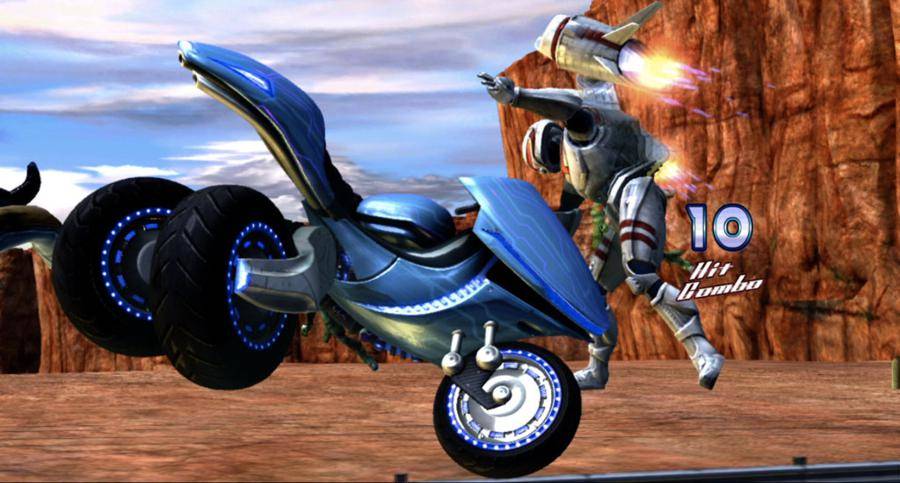 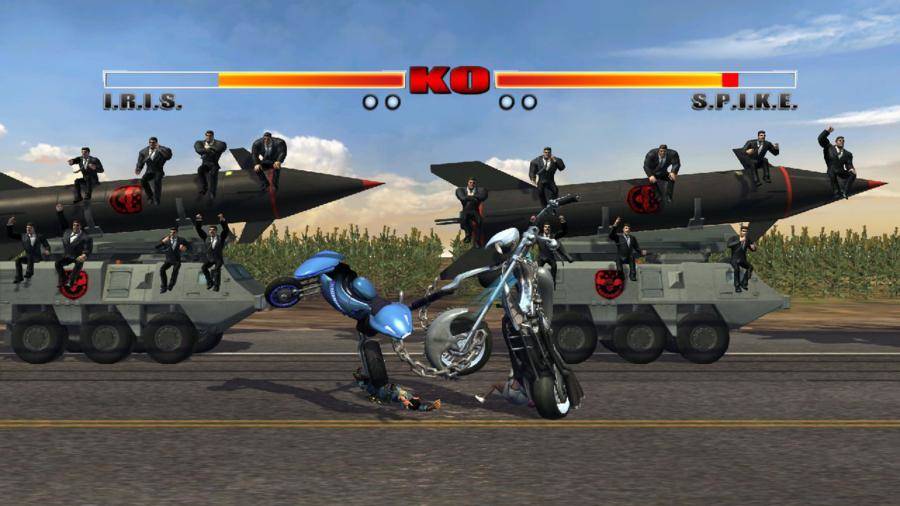 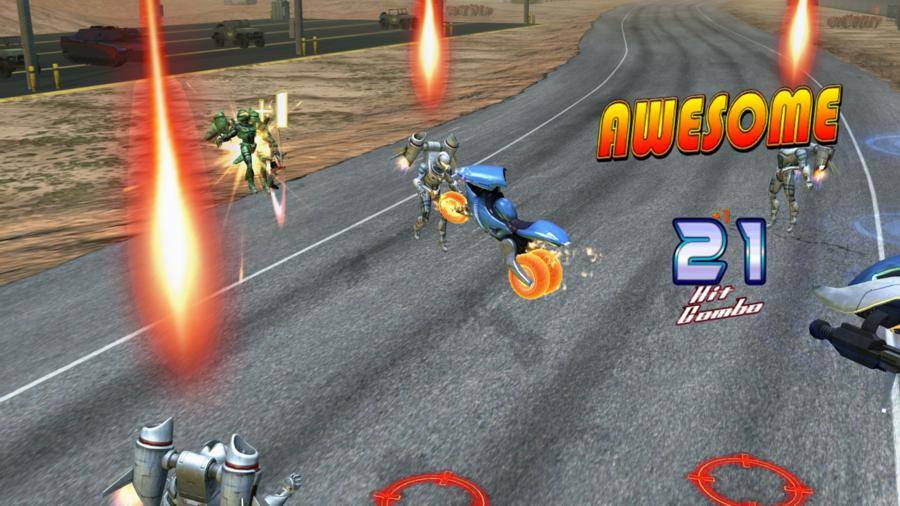 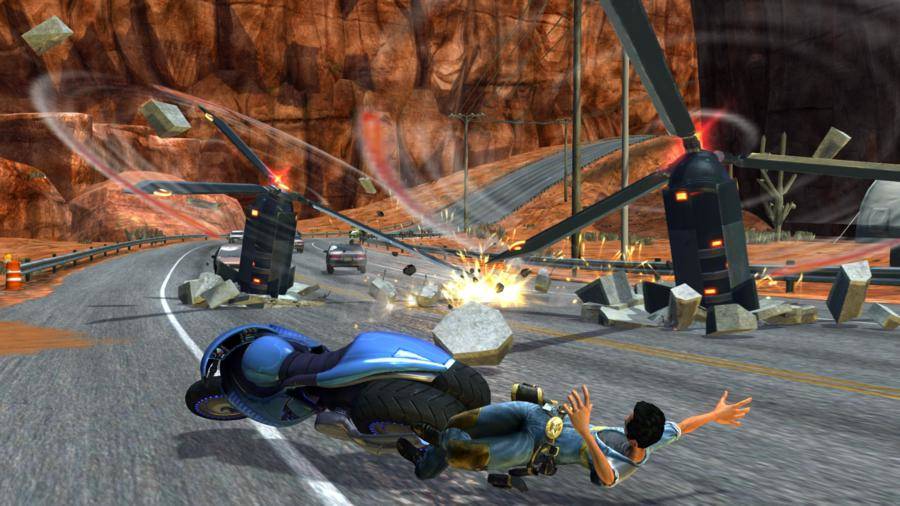 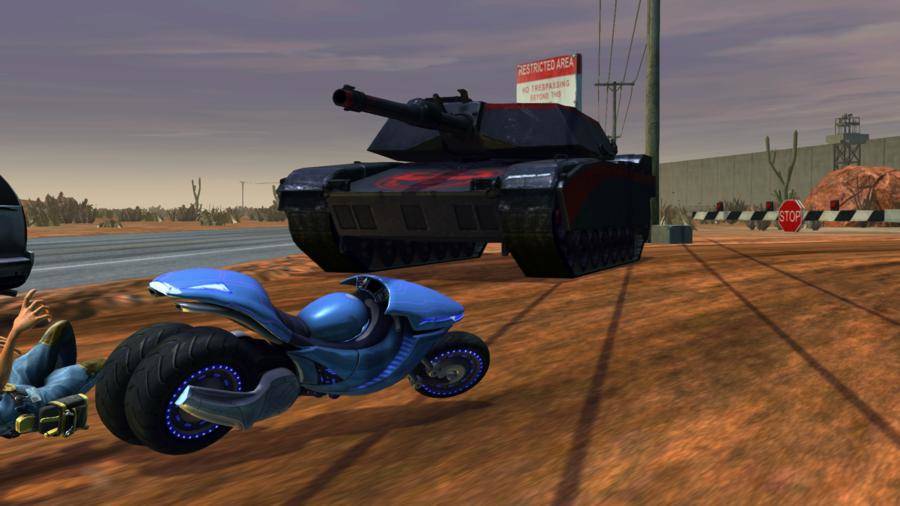 Even the game’s ultimate destination of Scottsburg is just a random location selected by I.R.I.S’s defective A.I. and surely that must be a symbol for the way that players race towards whatever goal their Xboxes demand!

Mercifully, LocoCycle does all of this without a whiff of pretension. It’s a big dumb game where things ‘splode all over the place.

The plot is meticulously-crafted nonsense in which I.R.I.S. and Pablo fight the endless minions of the evil Big Arms corporation. There’s wide variety of weird henchmen and robots that appear to plague duo. Among their enemies is another talking motorcycle named S.P.I.K.E. who recruits a random redneck woman and proceeds to drag her around the country in pursuit of I.R.I.S. and Pablo.

Surely that must be a symbol for the way that players race towards whatever goal their Xboxes demand!

Between fights, the heroes engage in chatter that consists of Pablo shrieking in Spanish, while I.R.I.S. misquotes eighties action movies. A running gag is that I.R.I.S. does not speak Spanish, so the two main characters in this story never actually communicate. That’s probably a metaphor for the way that players can’t directly communicate with the game’s designers and must suffer through a one-way flow of information. Or maybe it’s just funny to hear Pablo screaming in terror while I.R.I.S. callously recites non-sequitur lines from Big Trouble In Little China.

Throughout the adventure players will be treated to live-action cutscenes which use the same actors that voice the in-game characters. These are some very familiar faces to sci-fi and horror fans; Pablo is played by Freddy Rodriguez from Six Feet Under and Planet Terror, and I.R.I.S. is voiced by nerd babe Lisa Foiles (who has a cameo as another character in the live-action scenes). They’re joined by Robert “T-1000” Patrick, Tom Savini, James Gunn, and Lloyd Kaufman of Troma Entertainment.

These live-action scenes are shot with a super-low budget, not unlike a Troma Film. Observant players will even catch a reference to the developer’s previous game, The Gunstringer, which featured similar live-action scenes (Yes, that’s Wavy Tubeman Chronicles playing on the TV set behind Pablo).

The story presented in these scenes could easily have been done using 3D animation or the game engine, but the unabashed amateurism adds to the surrealistic humor of LocoCycle. Twenty years ago “Full Motion Video” was done with complete seriousness in the first Resident Evil game, where live actors in silly costumes appeared in a grainy intro video. Today LocoCycle appears on next-gen consoles using modern 1080p resolution to depict motorcycles eating ice cream. No doubt that is a metaphor for how technology has outpaced story-telling! Or maybe it’s just an excuse for the developers to hang around with Lisa Foiles and Tom Savini for a little longer.

While the humor and absurdity of LocoCycle will bring a smile to most player’s faces, the actual gameplay is substandard. I.R.I.S. can shoot enemy cars or use her articulated wheels to engage in melee combat, but the mechanics for each mode of combat are fairly simple. When driving, players just need to hold down the Shoot button and follow along behind the bad guys’ cars. Other enemies require I.R.I.S. to get close, then use a basic combo system of Light Attack/ Heavy Attack to pummel them.

As players complete each level they’ll gain experience points based on how flashy their combos were, and these points can be used to level up I.R.I.S’s attacks and stats. Eventually she gets a reasonable variety to her skills, but the game only take about five hours to beat, and the combat stays rather simplistic for much of the experience. Players of moderate skill can expect to unlock every ability before the final few missions, so there isn’t much incentive to master the combat.

These live-action scenes are shot with a super-low budget, not unlike a Troma Film

The enemy types do vary throughout the entire game, so players will have to stay on their toes to deal with each new threat. There are also quite a few minigames, QTE segments, and Boss Battles that break up the routine (and of course a lengthy live-action cutscene after every handful of missions).

LocoCycle was a launch title for the Xbox One a few months ago, but it was hardly a showpiece for the potential of that console. The new PC edition doesn’t look any better, nor does it benefit from the keyboard and mouse control set-up. The default controls are are an inelegant attempt to simulate the dual analog sticks of a gamepad by using too many keys. Players will want to use a real gamepad or extensively re-map the controls.

Once set up with a palatable control scheme, players can blast through LocoCycle over the course of an evening, then lie awake all night struggling to determine whether it’s a brilliant parody of modern game narrative, or some goofy game where the robot lady punches people with her tires. It’s available now on PC, Xbox 360, and Xbox One.