Metal Gear Rising Revengeance sent up some red flags when it was announced; it didn’t have Snake as a playable character, it wasn’t part of the main Metal Gear storyline, and it was an action game with very little of Metal Gear’s genre-defining stealth gameplay. However it was developed by Platinum Games, the studio behind Bayonetta, so it wasn’t such a surprise that Revengeance turned out to among the best action games of 2013. Alas, it was only available for consoles, leaving PC Gamers out of the loop until now.

Revengeance has players control Raiden, the pretty boy protagonist of Metal Gear Solid 2. It takes place some time after Metal Gear Solid 4, and at this point in the timeline Raiden has become a creepy cyborg ninja who works for a private military company that is pitted against a rival organization.

Not Your Typical Ninja

As a ninja, Raiden can sneak up behind people and stealth-kill them, but Revengeance is generally played as an action game where players slash away with a high-tech sword that can slice up enemies like tomatoes. He has access to grenades and rocket launchers, but ammo is limited and swordplay takes the focus. There is a combo system, a series of upgradable melee weapons, and unlockable special moves which make Revengeance resemble the God of War series or Ninja Gaiden more than a Metal Gear title. It also features a slow-motion “Blade Mode” that works like Bullet Time does in a shooter; enemies become nearly motionless and players can take their time to slash away at weak points for quick kills.

The gameplay is a big detour from previous games in the series, but players who put in the effort can still use stealth to make levels easier (And to earn extra “Battle Points” which are used to buy upgrades for Raiden’s abilities). There are also support gadgets that players can use to distract guards and disable surveillance systems.

The story and setting are still just what players will expect from a Metal Gear game – a high-tech metaphor for present day social and political issues. Early on Raiden points out that “One sword keeps another in the sheath,” meaning that violence can be used to prevent greater violence. The story is an apt analogy for some conflicts in the real world, and it tackles socially-relevant issues like child soldiers and the meddling of industrialized nations in the affairs of the developing world. 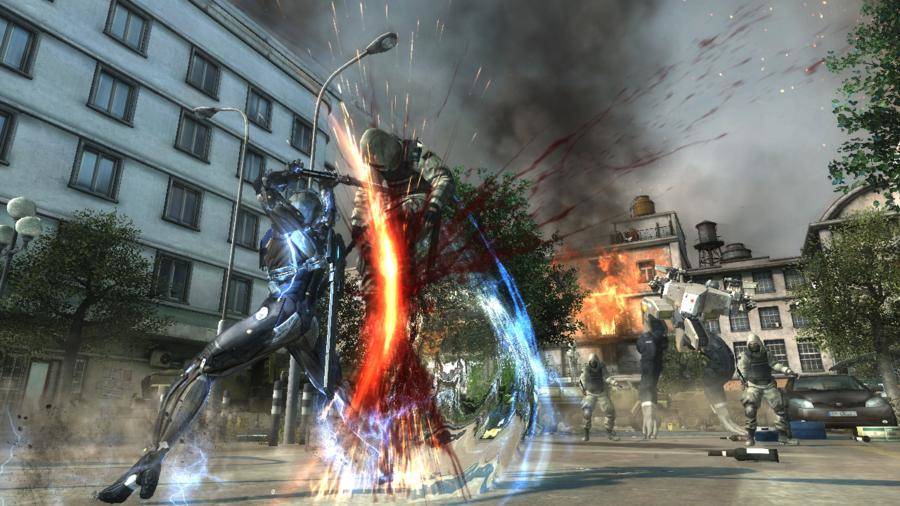 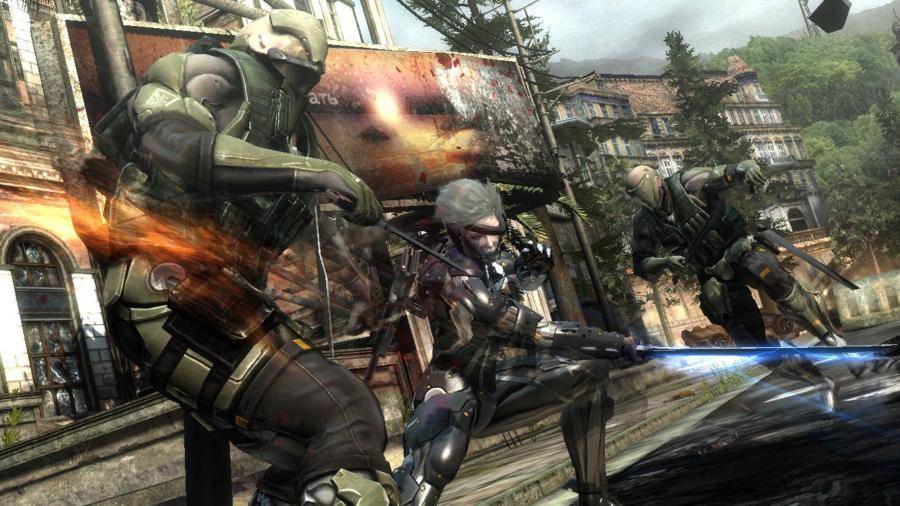 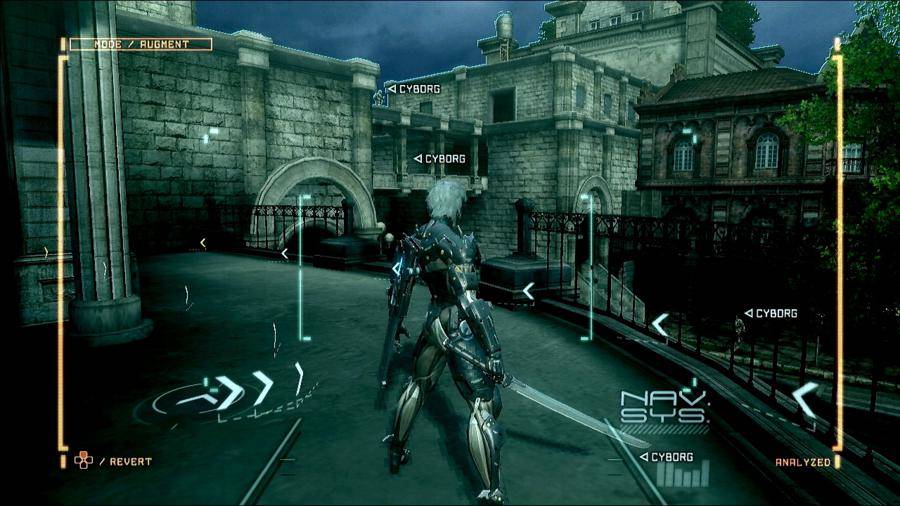 Of course it does this by forcing the player to hack & slash their way through the story, but it also takes the time to address the fact that “Bad Guys” are still people, despite attempts to de-humanize them. In this case the enemy cyborgs are literally dehumanized by their cybernetic augmentations, but both Raiden and the player get to see the humanity in these enemies over the course of the story.

The original console version of the game was often criticized for the short length of the campaign. It’s intended to be replayed multiple times, with players trying to earn better scores each time they play a chapter.  However there were several DLC packs that came out post launch which added a few hours to the play time.  One of these has players take control of Raiden’s nemesis for about an hour, and the other lets players become a robot doggie!  The new PC edition includes both of these story-based DLC packs along with some extra VR missions. There were also a few pre-order bonuses that include alternate outfits and weapons and these are included here as well.

The bonus VR missions can be played right from the start of the game, which gives PC players the chance to earn some extra “Battle Points” before tackling the main story. The new outfits are available from the start too, but players need to buy these with Battle Points and it will take the average player a few hours of play to buy them. Long-time Metal Gear fans will be pleased that the new outfits include the Grey Fox cyborg exosuit and sword.

Revengeance looked great on consoles, but the PC edition has some visual enhancements, and it looks much better than its console counterparts. Among the additional options is increasing the maximum number of chunks that an enemy can be chopped into.

Usually the transition from a gamepad to a Mouse and Keyboard will increase the precision, but with Revengeance the controls feel clumsy on PC. The Blade Mode on consoles was activated by holding down the left trigger, then aiming the camera with the left stick, while using the right stick to slash with Raiden’s sword. When translated to SHIFT, WASD and a mouse this isn’t quite as exciting or intuitive. The game does have support for console-style gamepads to mitigate this problem.

The PC edition of Revengeance is no quickie port. It’s the definitive version of the game, benefiting from increased PC power and bundling all of the bonuses from the various console releases.  An action-packed, sometimes goofy, but usually thoughtful affair, it is also the first time a Metal Gear game has arrived for PC in many years.  This makes it a worthwhile opportunity for PC gamers to get back into the Metal Gear franchise.