It’s hard to judge a sequel without comparing it to the original. Broken Sword: Director’s Cut set the standard for the series, which I praised in my review. Broken Sword: The Smoking Mirror – Remastered is a decent game, however, it simply does not measure up to the original in most categories.

A lot of what made the first game great is still present, including the whirlwind, world-hopping adventure. Sticking to its point-and-click roots, The Smoking Mirror is set six months after the first, with protagonist George Stobbart making his return to France at the behest of his photojournalist companion, Nico Collard, only to find himself embroiled in another world-threatening conspiracy involving the occult. Ain’t that always how it goes?

The script is as witty and wonderful as the first, with the world being inhabited by even more sharp and biting personalities. The graphics have been polished and are now in crisp HD, with more character portraits that turn the game into a pseudo interactive graphic novel. The music captures the feel of each location in the backing beats; the regular soundtrack is mixed with more flavourful instruments and melodies that best represent the environment, such as Latin flair is South America, or bongo drums in a tribal village.

But that’s where it all ends really, as far as positives go. Every other aspect of the game pales in comparison, and it was a fault that was present in the original PlayStation and PC release. It starts quite early too; the start of the game feels like you’ve missed a half hour somewhere as it drops you into a predicament immediately and without warning. It has also lost the illusion of freedom that its predecessor had succeeded in. There’s a difference between being on a monorail and knowing you’re on a monorail. 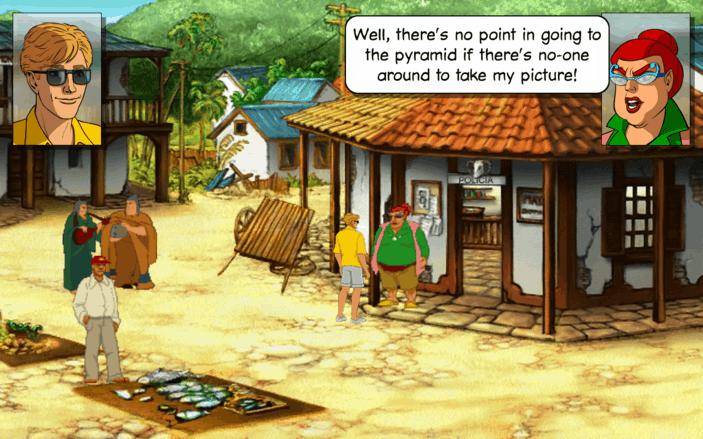 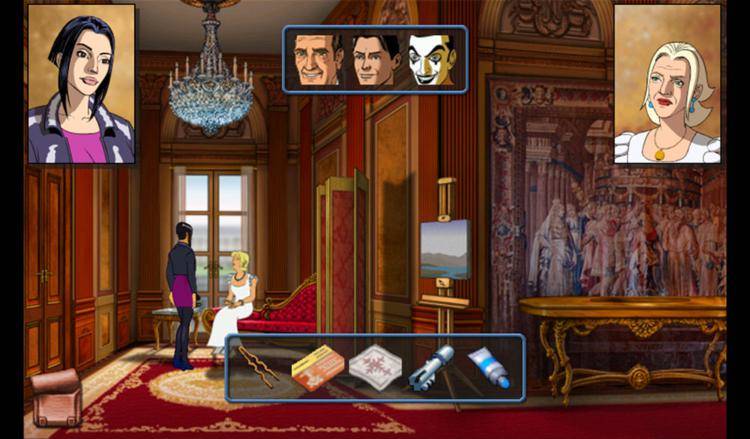 It’s shorter too. I was about thirty minutes in when I noticed I was around 25% of the way through. If you were to play this game for the first time and without the hint system, I would estimate this to be about four to five hours long, roughly half the time the first game would take. It’s disappointing and leaves you unsatisfied.

Speaking of the hint system, let’s just say it’s a good thing it’s there. The first game managed to avoid ridiculously obscure puzzles. They weren’t necessarily easy, but they had logic to them. Here though, it feels like the writers lost their creativity. Or found it, depending on how you look at it.

Some puzzles require a painful amount of lateral thinking, and it always leaves you dumbfounded. If you’re unlucky, you’ll find yourself clicking everything and anything, trying to use every object with everyone and everything, and every time it’s annoying. Take this for example: a boy needs a lure for his fishing rod. You could give him the quill you have, but that will not do. First you must give it to a cat who will tear it to shreds. Then you can use it as a lure. See what I mean; it lacks intuitiveness and that’s key in a point-and-click game.

“Would you be interested in these panties? They look about your size”

Broken Sword 2 leaves less of an impression than its predecessor. The places you visit are great – they truly stand out and are all unique and different, from an island of paradise to the rainy streets of London. It’s a shame then that the characters you meet, bar the returning ones, aren’t as striking as they should be. In the first game, a lot of the characters you meet only one time still manage to make a lasting impression. Not here though, some even look and sound the same, which doesn’t help. On top of all that, the main antagonist is a major let down; he’s no more more than a paper-thin pantomime villain, who’s hardly even in the game. A far cry from the villain of the original.

Unfortunately, the UI has been downgraded. Despite making every button larger, it manages to be more finicky than the last game. There was a lot of frustration brought on by George Stobbart loping around the environment when all I wanted to do was open his bag. Or maybe he investigated a window for the third time in a row when I wanted to click on a picture. It doesn’t work as well as it should, and point-and-click games are supposed to be perfect for touchscreen devices. It’s made all the more disappointing considering it worked well in the first game.

I strongly recommended the first game in my original review, so anyone who went to the sequel for a similar experience would probably be left burned. Even with the witty script and beautiful visuals, Broken Sword 2 left much to be desired. I still recommend a play-through, just don’t expect as iconic an experience as its predecessor.