These kids today with their video games! You know what gamers need to do? Lighten the hell up! Gamers whine about how a new game has day one DLC, or it doesn’t have multiplayer, or “My favorite voice actor isn’t returning this time,” or the game’s offensive, or doesn’t mesh with their politics. It’s about time gamers everywhere just lightened the hell up and enjoyed their damned games! Oh, and you Game Designers out there… Don’t go acting all smug. You smarty pants designers are always strutting around bragging about how your titles are full of philosophy and political allegories, and references to books that one actually read. You need to lighten up too and make more games where players can beat aliens to death with their own anal probes. You need to make more games like Saints Row IV.

The Saints Row series started out as a free-roaming criminal rampage game that was very close to Grand Theft Auto, but by the time Saints Row The Third showed up the developers had pretty much abandoned the idea of edgy crime drama and made a game where gamers could drive around on the Light Cycle from Tron, shooting people with a Shark Gun while their pal Burt Reynolds helped them beat up zombies.

In short, the developers had lightened up.

Saints Row IV picks up where SRIII left off and continues to run headlong towards infinite zaniness by adding in more aliens and superheroes, along with a bit of The West Wing. In the prologue, the Boss of a street gang called The Third Street Saints ends up saving America from a nuclear attack. Of course the next step is for the Boss to become president of the United States (For our foreign readers who don’t understand American politics, this is exactly how America chooses our President).

For our foreign readers who don't understand American politics, this is exactly how America chooses a President

In the fastest series of plot twists imaginable, Earth is invaded by aliens, the Boss gets plugged into a Keanu Reeves Matrix, and gains superpowers within the first hour of gameplay. Because… why the hell not?

When the Boss is plugged into the alien virtual reality matrix, she (or he, depending on the Player’s choice when creating the character) can run around a virtual representation of Steelport, the city where SRIII was set. In these sequences, the Boss can bend the rules of the simulation so that they can run at super speed, leap tall buildings, throw fireballs and engage in other forms of comic book mayhem.

People who played SRIII will remember a brief superhero mission from that game, and the free-roaming aspects of Saints Row IV often feel like a big SRIII mod (parts of Saints Row IV were originally intended to be a SRIII DLC pack). Players explore the city, hunting for activities to unlock, and many of these are very similar to those found in SRIII. Of course, now there are super powers! So, an activity might involve sprinting through the streets with super speed, scaling towers with super jumps, or causing as much destruction as possible with just one superpower. 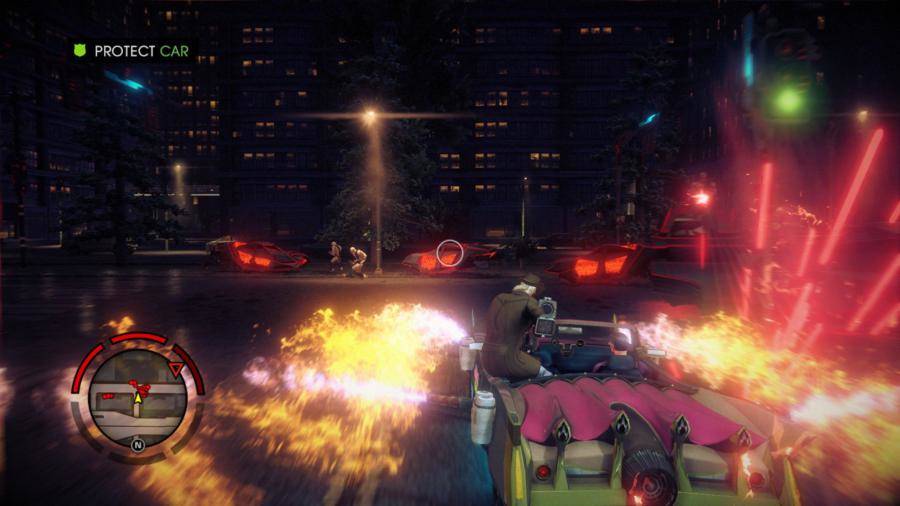 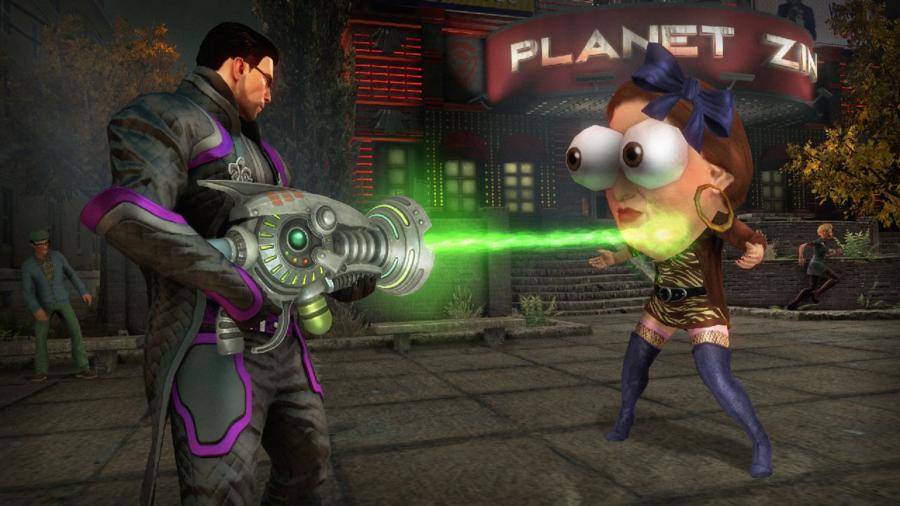 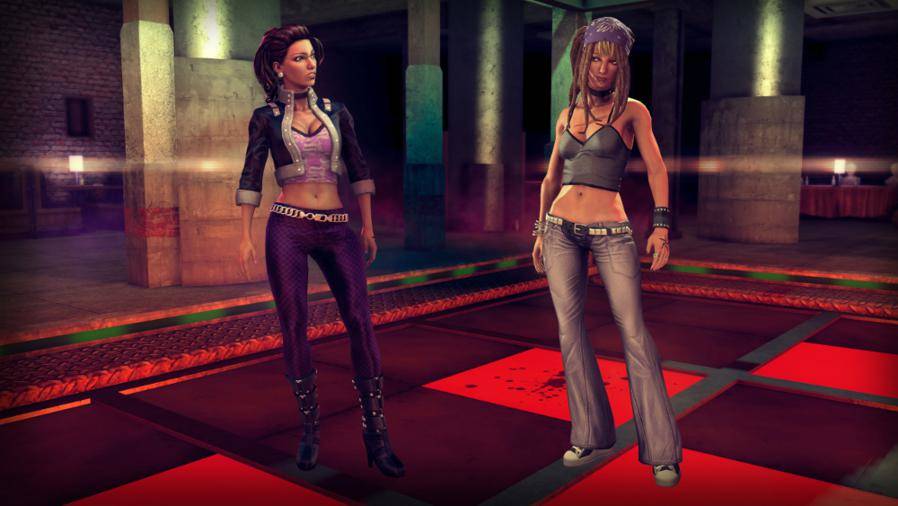 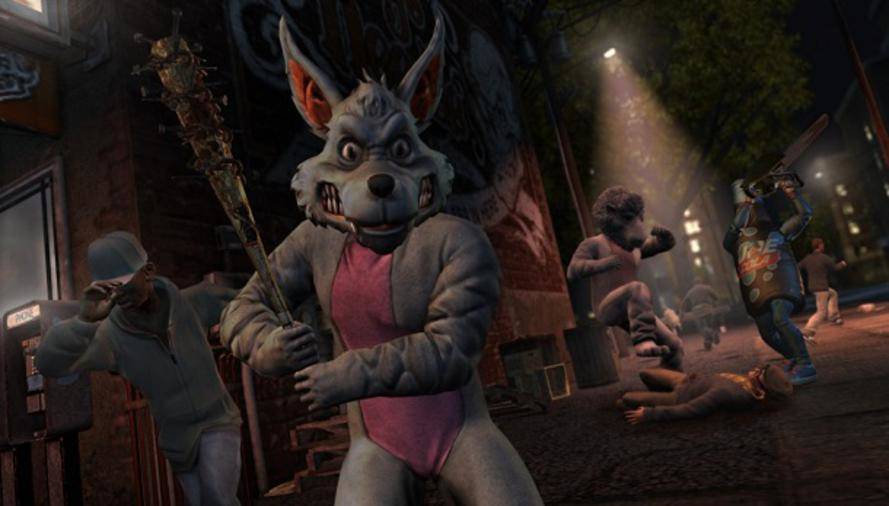 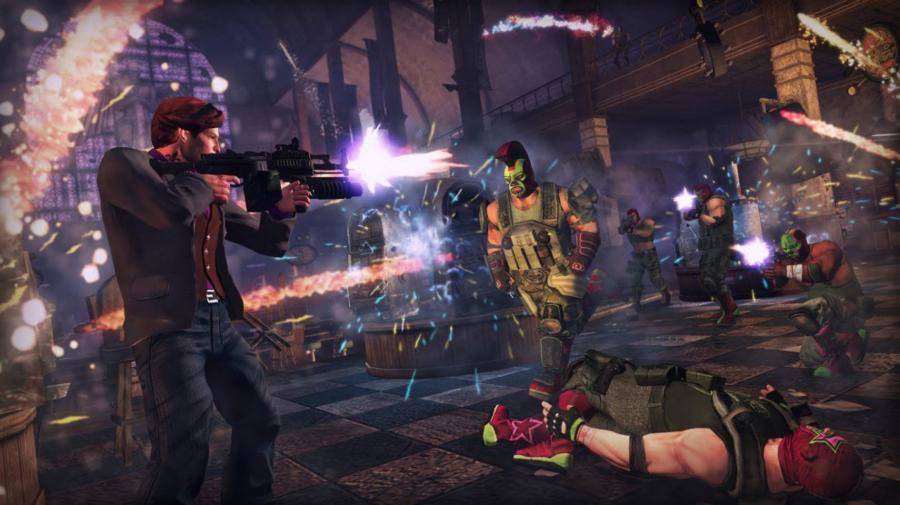 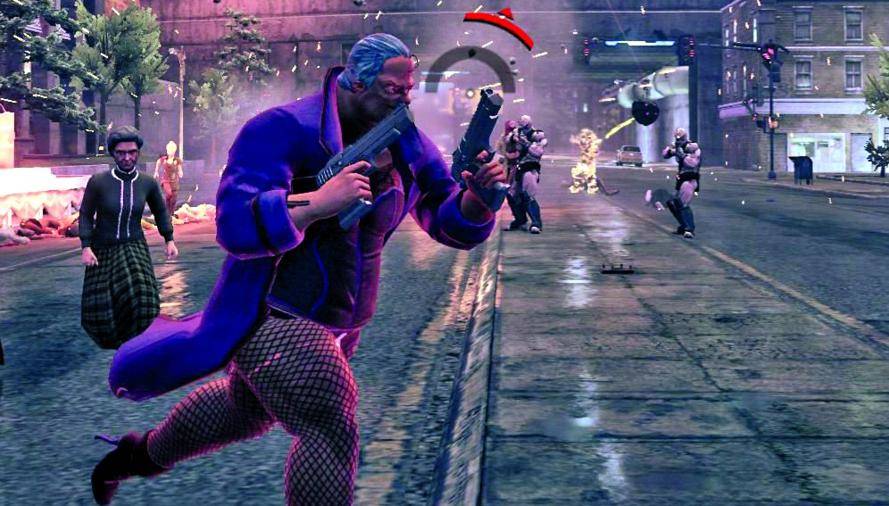 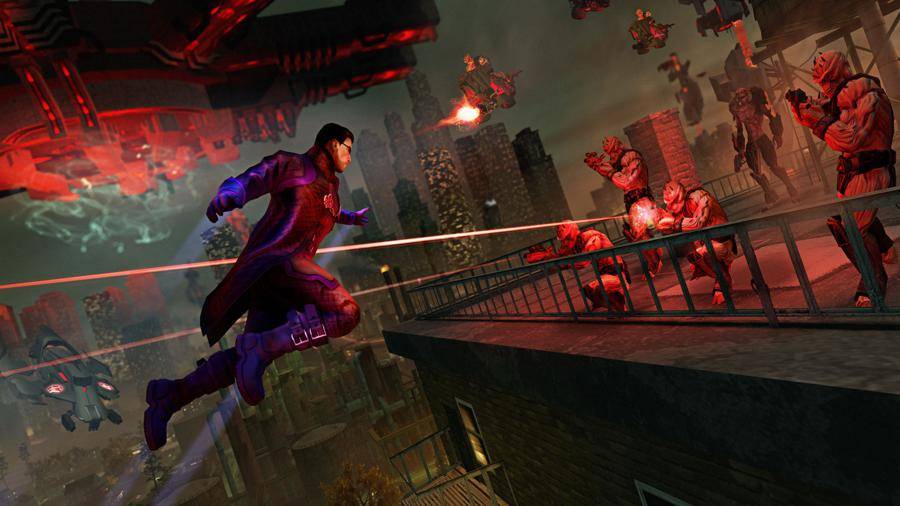 Aside from the powers, players now have easy access to a wide variety of alien weapons and vehicles. Laser guns, hover tanks, UFO’s and even mechsuits! These are all acquired relatively early in the game, and many of them have activities focused on that particular vehicle or weapon. The sense of being incredibly powerful is there throughout the game; players won’t have to wait until the end to really feel like they’re the big damn hero of Steelport.

A Return to Steelport

The city uses essentially the same maps as in SRIII, but it looks different because it is now a simulation used for alien propaganda purposes. This virtual Steelport is intended to brainwash its inhabitants into accepting the rule of the evil Xin, so there are spoofs of WWII propaganda posters, and lots of space monsters mixed in with usual denizens of Steelport.

This super-powered matrix adventure is fan service at its best. The player soon becomes a nigh-unstoppable engine of destruction in the virtual world, but at times the Boss will have to unplug from the matrix and go out into the real world. In the real world the player has to resort to traditional third person combat with guns, rather than super powers. When pursuing the main storyline, Saints Row IV does a much better job of distinguishing itself from the previous game. Super powers are less prominent here, and it often feels like a different game. Over-the-top action is still present, but the Saints are underdogs in the real world as they fight off the alien invaders.

In these sequences the developers are deconstructing their own narrative; exposing the player’s feeling of powerlessness when forced to stop playing video games and experience the harsh realities of…

You know what… It’s Saints Row. The developers probably aren’t “Deconstructing” anything. They probably just thought it would be fun to have a sequence where the main character wakes up naked and covered in jelly like Keanu Reaves did in that scene from the Matrix.

But the developers at Volition do have fun in mocking other popular game franchises and genres. The story-based parts of the game involve the Boss trying to reassemble the gang after the alien invasion. This means engaging in missions that spoof military shooters, or stealth games like Metal Gear and Splinter Cell, along with classic 2-D fighters, and text adventures.

Saints Row has become the court jester of the video game industry. A major franchise that isn’t afraid to snicker at everyone else’s self importance. Even the idea of romantic subplots in games like Mass Effect gets subverted as the randy Saints engage in all sorts of depraved, unromantic acts on their space ship between missions.

The one bit of reverence that comes into play is towards their own franchise. Long-time fans of the series will find endless callbacks to the previous games in the series. Because the Saints have access to a VR simulator, they can visit locations from the earlier games, and meet virtual versions of old friends. The drama in these scenes shows that Saints Row’s campy humor is a deliberate choice from the developer, and that Volition could do a serious game if they wanted.

But the game industry doesn’t need another gritty crime drama for Fall 2013. It needs a game where players can dress up like an Octoberfest girl, then go kill furries with a UFO. Saints Row IV is out now for PC, Xbox 360 and PlayStation 3.