There are a lot of free to play MMORPG’s out there, some require you to pay just to do some mindless things and others have dull combat that rely on hot keys and very precise statistics. I was never able to get into these types of games, they focused to much on knowing everything about the game. Luckily Sony Online Entertainment had made a free-to-play MMORPG that had interesting combat and no impossible to understand statistics. This is a game that immerses you into the DC universe and you truly feel like you are playing as a real DC superhero.

The game starts up with this absolutely fantastic intro cinematic which explains the story in detail. In the future, the world is in chaos, heroes and villains are fighting in an all out war and the heroes are soon wiped out. Braniac invades and takes over the world. Desperate, Lex Luthor travels back to modern times to help heroes like Wonder Woman, Superman and Batman stop Braniac before he can put his evil plans into motion.

Lex plans to do this by releasing “Exobytes” into the air to create a new breed of super heroes and villains. After you have been given some exposition, you get to create a character. There are a lot, and I mean, a lot of things to choose here, powers, movement type (Acrobatics, Flying or Super Speed), weapons, mentor, alignment, skin type, costume and even the way you stand. Once your caped crusader has been created, you are dropped into a tutorial level that explains in very good detail how to play. Best of all you get your first taste of the excellent combat.

This game is beautiful, from the clean, sun lit high rises of Metropolis City to the dark and dirty alley ways of Gotham

Instead of waiting and pressing a hot key occasionally like in other MMOs, the combat in DCUO is fluid – it’s like playing a single player game. It’s in real time: you input an attack and you attack. It might not seem that important but for an MMORPG, it’s a rather pleasant surprise. My only real problem with the tutorial is that you can’t skip it, so with every new character you make, you must go through the tutorial again.

DCUO has 2 worlds of decent size, Gotham City and Metropolis, both are quite large in size, they’ve been compared to being the same size as the map from Grand Theft Auto – Vice City. Both worlds are full of iconic areas and collectibles. 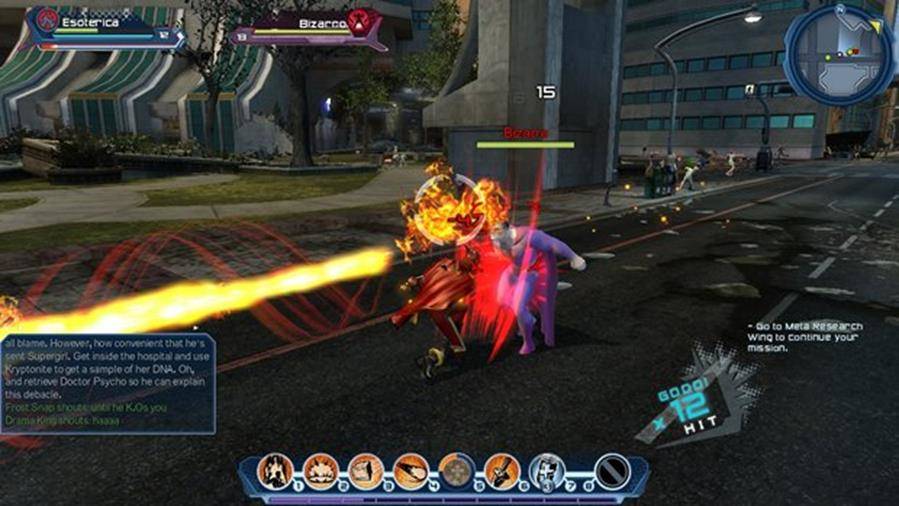 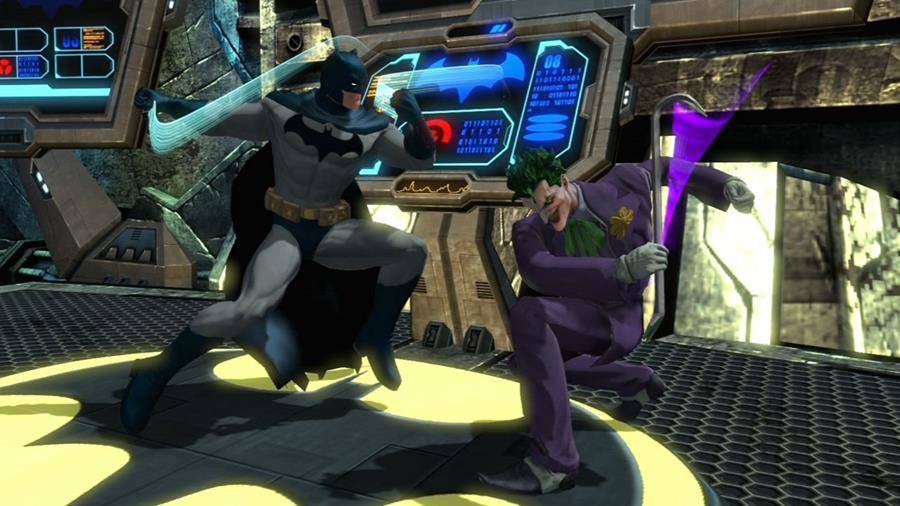 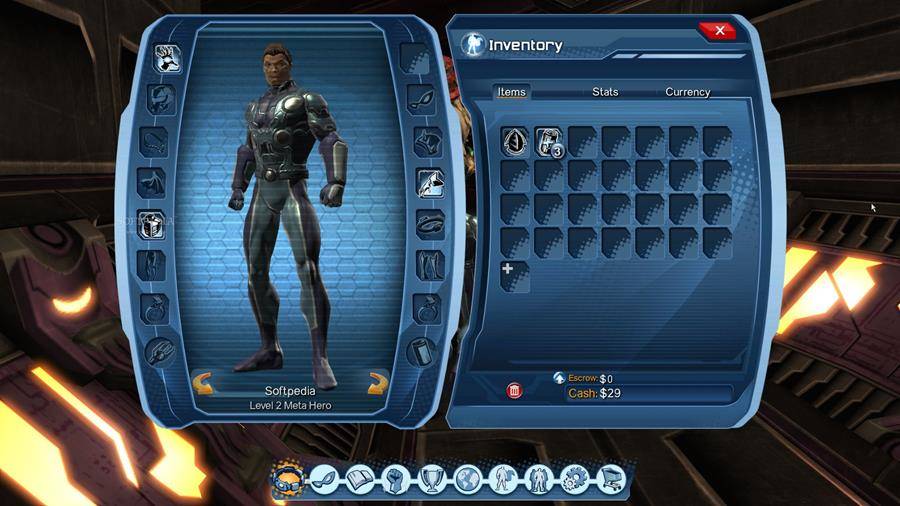 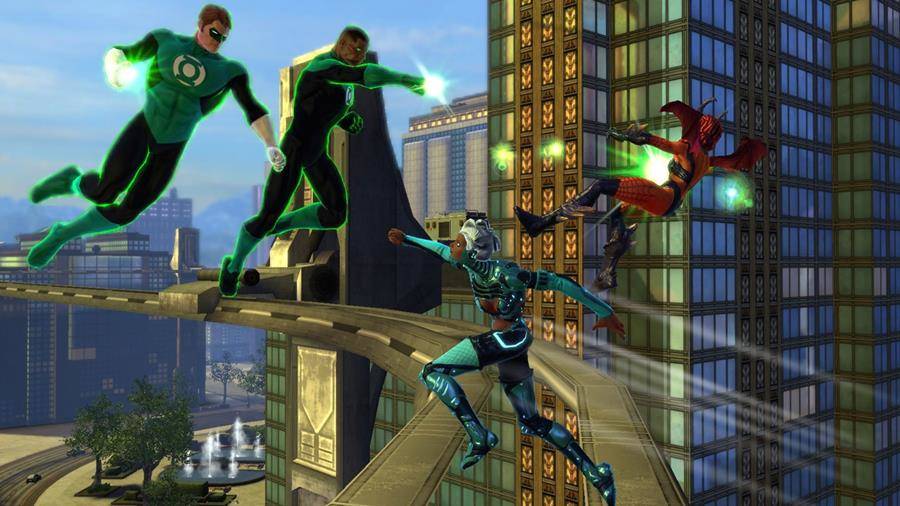 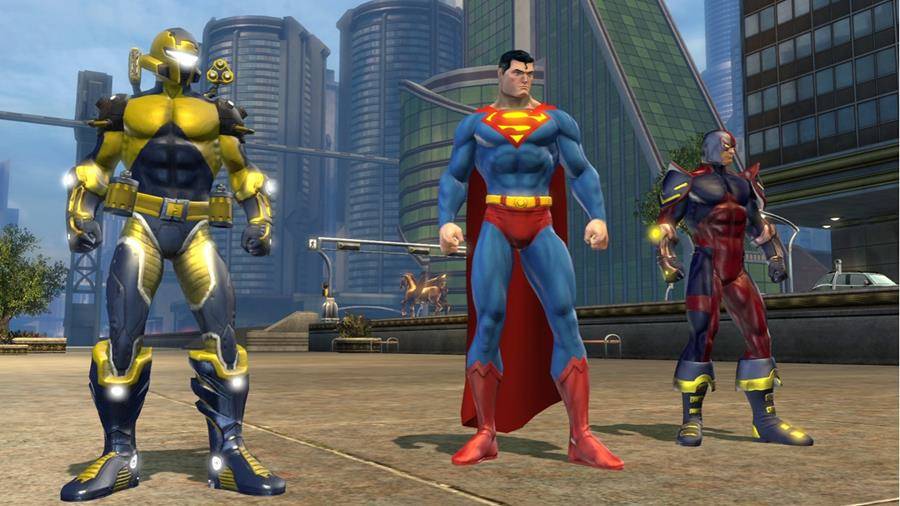 The world that you arrive in depends on the mentor you have chosen, you’ll arrive in Gotham if you chose to be mentored by Batman or The Joker and you’ll arrive in Metropolis if you chose to be mentored by Superman, Wonder Woman, Lex Luthor and Circe. If you are on the side of the heroes your safe house will be one of the many police stations across the two cities, if you chose to follow a darker path you’ll find solitude inside one of the many night clubs across Gotham and Metropolis. Once you’ve become settled, your mentor will give you a message and a task that needs doing, then you are on your way to become a well known hero or a feared villain. You’ll do this by taking on missions – and other players – across your chosen world.

This game is beautiful, from the clean, sun lit high rises of Metropolis City to the dark and dirty alley ways of Gotham, the game just looks fantastic for being an MMO. All the characters in the game are well modelled and all are very unique, you wont be fighting off endless waves of goons that look the same. The cutscenes in the game take on a comic book style, they look excellent. I did on occasion encounter some slight texture pop in but it’s not that noticeable.

The sound design in this game is absolutely stellar, the sound effects from fire blasting out of another player’s hands or the wind rushing past when your character is flying through the sky. The voice acting is also fantastic, it features some well know actors like Mark Hamill who plays The Joker.

The game has different PVP modes, from playing on a normal PVP server or going into a simulation to play as an actual DC hero/villain, fighting against other players. There are also co-op maps in which you and up to 3 more people can go through a map, completing objectives and fighting enemies along the way!

DC Universe Online has DLC that adds a lot to the game, including new powers, weapons and missions. There are a few vanity items you can buy but they don’t affect the core gameplay in any way.

DCUO is a great game – it looks, sounds and plays exceptionally well, the customization is stellar and  it’s a game that you can play with or without friends. The DLC in the game isn’t over-priced and it makes sense, adding to the experience. The audience for the game may be limited, but it does what it sets out to do really well. For a pay-to-play game, this would be excellent. For a free to play game, it’s astonishing.