It’s not easy, being a delivery boy in the future. While today the worst you might come across is aggressive dogs or mustachioed old ladies frightened to open the door in case you’re a little bit “ethnic,” in the future you’ll actually have people trying to kill you. Which is fine, because at least then you know where you stand. In Space Run your goal is to reach your destination as quickly and as safely as possible. Only one thing is certain: it ain’t gonna be easy.

There’s no need to worry: the difficult stuff (actually figuring out how to travel the vast distances of space without breaking the laws of physics) is already done for you. Space Run puts you not in the role of a pilot, but rather as the person in charge of defense. As your ship flies on its course, you’ll need to load up each empty hexagonal chunk of your ship with weaponry, thrusters for extra speed and shields. Bare in mind that you’ve also got to leave room for cargo. 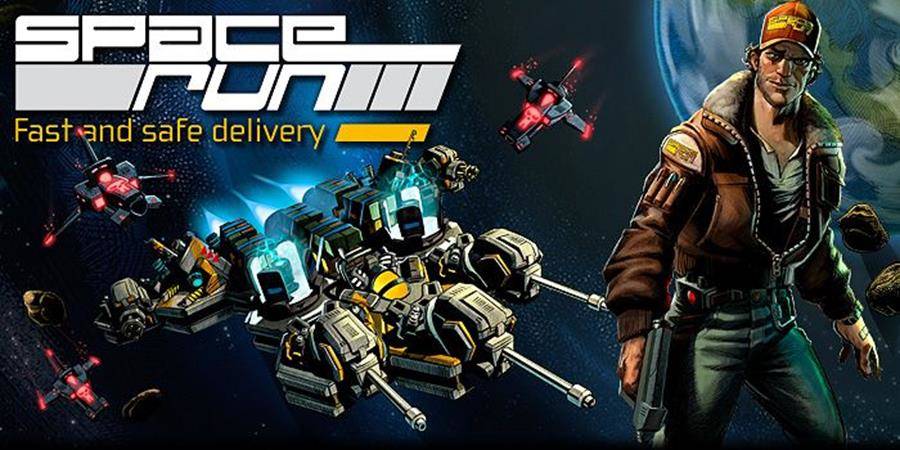 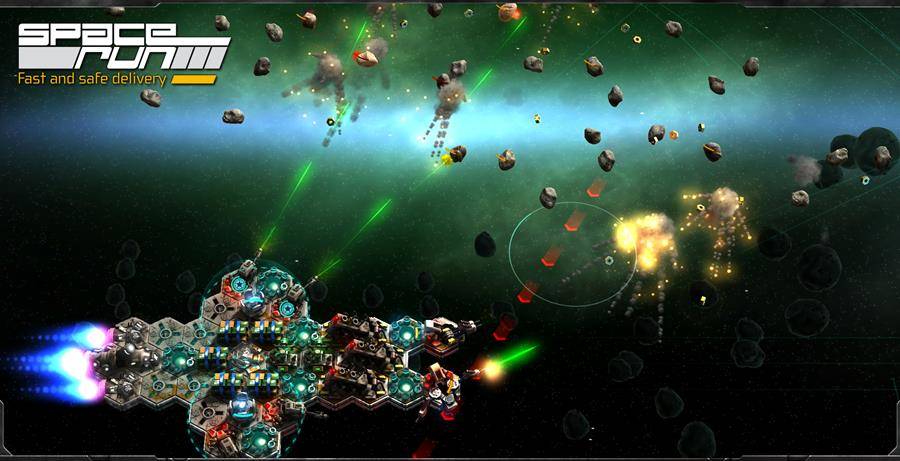 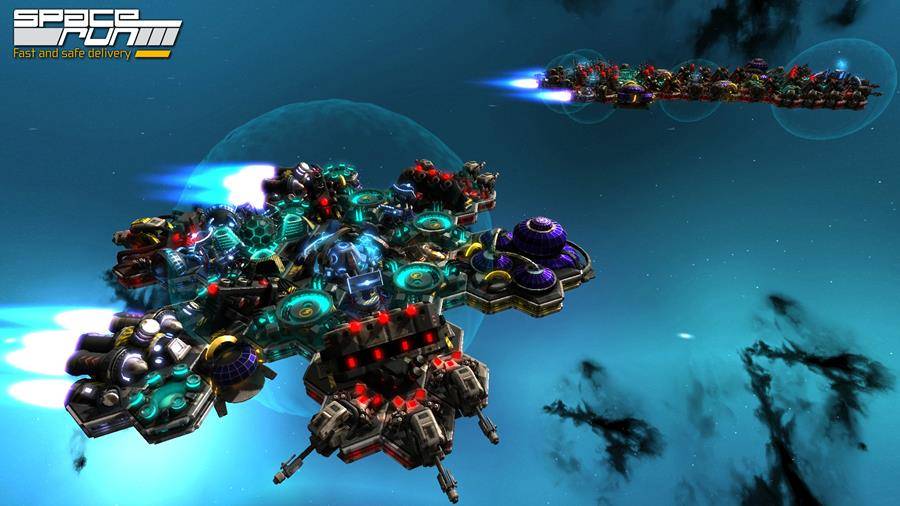 It’s never that simple though. People want to kill you. Pirates want to turn you to scrap so that they can make money off your firey remains. This isn’t just a cute reason to have to put guns on your ship, but a deep mechanic that makes placing cargo and weaponry a second-to-second strategic process. Put your cargo too near to the edge and it may be destroyed by passing asteroids, but bunch it too close to the center and you may find yourself rapidly running out of space when half your ship has been destroyed.

So while there is something of a minor disappointment when you realize you’re just going to be watching your ship travel in a vaguely straight line, with an occasional background planet to catch your attention, the depth of the tower defense is above and beyond what the genre usually offers.

After a few slower levels where you’re mostly facing off against half blind Sunday drivers and a few rather persistant pebbles, things rapidly become harder. The learning curve is rather sharp, too sharp if anything, and you’ll soon find yourself having to repeat levels.

That’s not necessarily a bad thing. Learning more as you play allows you to develop an eye for various situations. As things get increasingly complex, you’ll definitely need to know how to react if you want to continue.

After a few slower levels where you're mostly facing off against half blind Sunday drivers and a few rather persistant pebbles, things rapidly become harder.

And, of course, things are definitely going to get difficult. Although the variety isn’t entirely what it ought to be, fans of the genre will enjoy that they’re not treated with kid gloves. This isn’t your mom’s next iOS entry. If anything though, a touch screen would probably be quite a handy addition. There’s a lot of micro-managing to be doing, from repairing and recharging to pulling currency out of the vacuum of space, and you’d be forgiven for getting overwhelmed.

On top of the difficulty, Space Run stands out for its mission structure, which is the opposite of linear. With multiple companies offering you work, you can pick and choose the order in which you complete levels. This allows you to build up your equipment when considering tackling particularly hard outings.

This is marred by generally lousy dialogue, made bearable by passable performances by the voice cast. It’s hardly the most important part of the game, but some of the jokes will make you cringe. Level names and descriptions are loaded with popular culture references, which more than make up for the attempts at humour.

Space Run is disappointingly static when you’re actually on a mission. Things fly around you, but that’s around it. There’s little in the way of feeling like you’re zooming through a endless galaxy. The attacking vessels look decent, but will pop up often.

This isn't the Han Solo Simulator you've been waiting twenty years for, but it's a nice, thoughtful game that does what it does without issue.

The music and dialogue are passable, but won’t really stick in the mind. It doesn’t get in the way of the decision making, and that’s about as high a compliment as you can give it.

This isn’t the Han Solo Simulator you’ve been waiting twenty years for, but it’s a nice, thoughtful game that does what it does without issue. It’s more difficult than you might think, and you’ll need to react quickly. If you’re tired of battling the zombies on your lawn and fancy a step up to something slightly more fast paced, don’t even hesitate.