Back in the days when 64 kilobytes of RAM was impressive, there was the Commodore 64. Released in August 1982 (with a price tag of $595), the Commodore 64 brought 16 colors, three-channel sound, and it’s iconic blue start up screen to American households, and quickly dominated the home gaming market with titles like Last Ninja 2, Maniac Mansion, and Sid Meir’s Pirates! (plus it had awesome peripherals like the prehistoric mouse and the ‘Datasette’).

Of course, playing those games today is a lot simpler and cheaper, thanks to the many emulators sprawled across the web. Cloanto’s C64 Forever certainly isn’t the first or most advanced of these – but for a casual emulator like myself, it was a fantastic way to be introduced to the classic console. With a very Windows Media Player-like interface with over 100 games pre-loaded, the sometimes-complicated task of opening the emulator and getting is greatly simplified, all presented in a useful (though bland stylistically) browser. 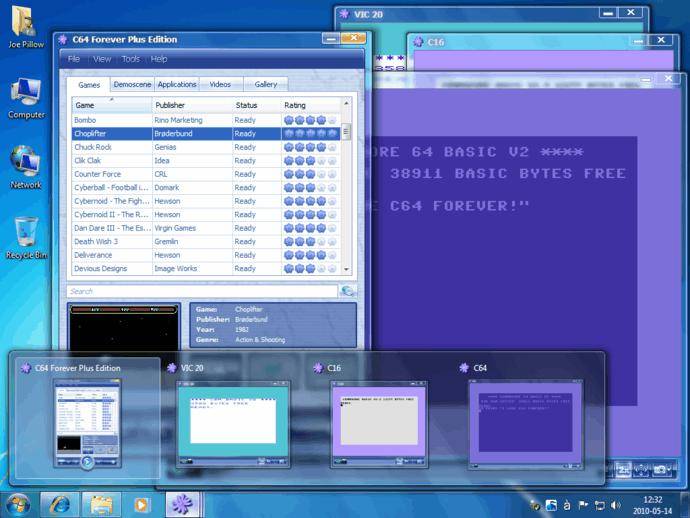 I played primarily with keyboard controls, and though they worked well in-game, sometimes I found myself struggling to figure out exactly how to get through main screens. Loading times were also a bit odd – it seems in a way to fully emulate the experience, the data loads with the grating sounds of early floppy disk drives, complete with lengthy loading times and occasional glitches where garbled BASIC language appears on-screen (the earliest form of ‘game freezing’, one might say).

The game collection included is fairly rudimentary – lots of sequels, a few iconic names like Frogger, Smash TV,  and the Ocean-published Mario Bros.. Thankfully, what games aren’t included can be installed through some of the game’s more advanced options, which include the ability to edit files and tweak performance and behavior to one’s liking, for those inclined to dig under the hood and play with the programming and installation of new titles (including configuration for 5700 different games, for lovers of the obscure).

C64 Forever provides the framework and easy accessibility that anyone could want from a classic emulation experience.