Far Cry 3: Blood Dragon came out of nowhere. “This is just an April Fool’s joke!”, people claimed. “Oh, it’s just going to be some lousy DLC!”, cried the cynics. Thankfully, none of this was true, and the Kojima-esque viral marketing campaign successfully drummed up interest. Blood Dragon is its own game, is definitely not DLC, is definitely an homage to 80s blockbusters, and is definitely awesome.

Meet Rex “Power” Colt. He’s a Mark IV Cyber Commando that spends his free time telling his HUD to shut up, quoting Reagan-era slogans (“winners don’t use drugs”) and punching nuclear reactors. As the star of Blood Dragon, Rex is tasked with taking on a villain that’s conspiring against the world on his island base – Omega Force leader Colonel Ike Sloan. Naturally, this calls for plenty of shooting, stabbing, explosions and, of course, dragons.

Unlike FC3, this is not a game that even remotely attempts to have a serious story. Virtually every 1980s action movie trope is present in the game’s plot (Rex is even voiced by action movie veteran Michael Beihn), and there are plenty of nods to 80s video games, as well.

The opening is an animated, motion-comic cinematic that smacks of the kinds of cutscenes found in late-80s PC and console games. Providing insight into the state of the world in the “near future” (2007, ironically), a future in which the U.S. nuked Canada to stave off the Soviets, and introducing Rex and his token-black-guy sidekick Spider; the intro is one of the funniest I’ve seen in awhile. The best part? The comedy gets even better from here on out. 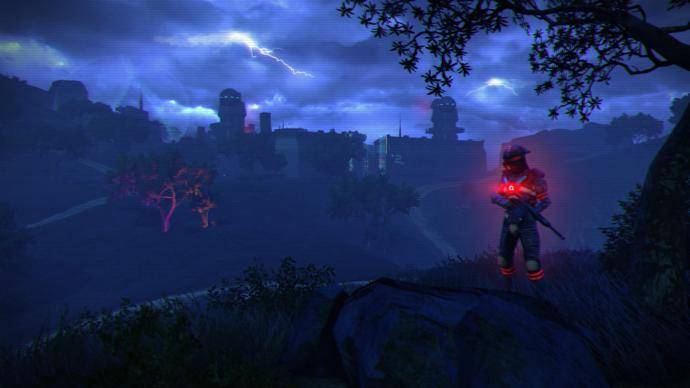 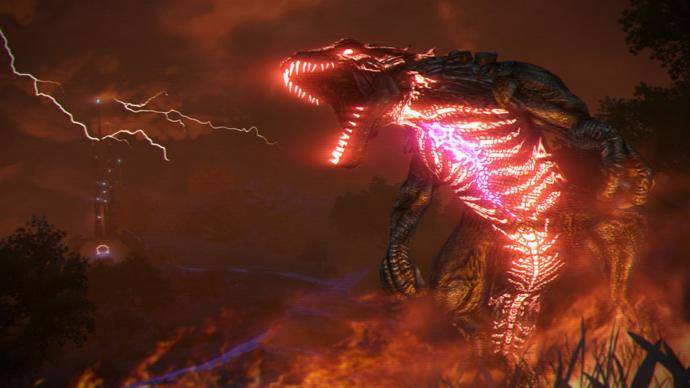 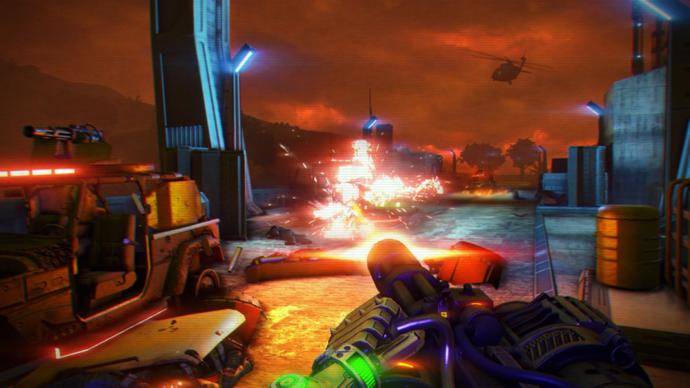 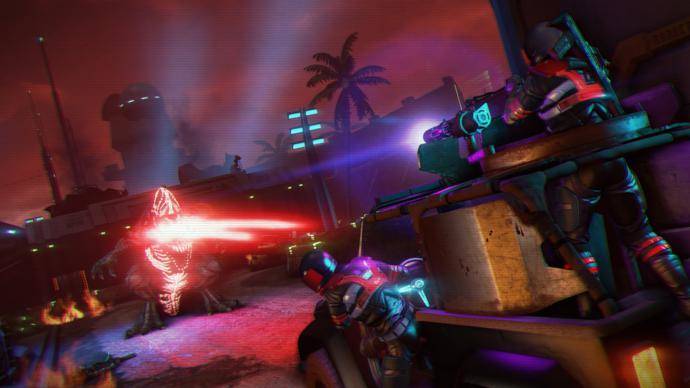 This isn’t a direct satire, however. The narrative is merely a campy homage to action/sci-fi fare of the past and is shameless with its references. The loading screen hints (“grenades explode”) and in-game tutorials (“running is like walking, only faster”) poke fun at modern video games, but they’re done in a way that doesn’t belittle them or gamers; it’s simply self-aware, good-natured ribbing designed purposefully to be bad.

After this humorous beginning, the game moves to Rex using a helicopter mini-gun to blow up an enemy base while Little Richard’s “Long Tall Sally” (Predator reference, natch) sets the tone. Then, after the initial tutorial, the action begins with gameplay more or less like the original Far Cry 3. This is not a bad thing.

While there are some subtle in-jokes to FC3, the two games are in no way related. The takedown moves, RPG elements, weapon mods and outpost takeovers are all present, but the overall atmosphere is less serious (by a wide margin) and the cinematic combat and outrageous gun-play gel effectively with Blood Dragon’s action-parody ambitions.

The addition of dragons is one of the many aspects Blood Dragon sets itself apart from its predecessor. By using cyber-hearts ripped from fallen Omega Force cyborgs, Rex is able to use them as bait to lure them towards enemies and unleash all sorts of chaos. The dragons are at the their most useful when taking over outposts (called “garrisons” this time around) since their large health bar and powerful laser attacks allow them to take out an entire squad rather quickly. This may seem a bit overpowered, but I didn’t find dragons grazing outside of every garrison and had to infiltrate them by myself numerous times.

The shark fighting, ridiculous chain-kills, heavy weapons and zip-line shoot-outs found in FC3 feel right at home here. This stylized action works superbly with Rex’s macho antics, that include saying cheesy quips during a kill-streak, flipping off enemies and spinning a magazine in his hand with a skillful flourish when he reloads. To top it off, his cybernetic implants allow him to sprint at high-speeds and take barely any fall damage. What this adds up to smooth combat and stunts that truly makes Blood Dragon feel like a high-octane action flick.

There are drawbacks, however. The enemy AI is moderately predictable, and I found it too easy at times to distract them so I could pull off lethal stealth maneuvers. There are some difficult moments (especially on hard), and the game does have a few tricks up its sleeve for the missions, but overall the campaign and optional tasks play out the same way in terms of structure and challenge. That being said, since the story is relatively short, and the world map isn’t that large, these flaws don’t really hold the game back and, more importantly, keep it from becoming tedious.

What really helps Blood Dragon in the immersion department is the graphics that are swimming in a sea of neon and the psuedo-80s synth soundtrack composed by Power Glove. I was completely fascinated by the pinkish hue that engulfs the wonderfully rendered island environment. The artistic choice to add in scanlines like those found on old CRT televisions is a great touch, not to mention the VCR “tracking” meter during loading screens. Ubisoft definitely paid attention to detail here, and the game is better because of it.

The soundtrack pays off, too – in a big way. It perfectly reflects the 80s vibe found in the story and visuals. Power Glove really outdid themselves here with a score that channels the creative minds of 1980s soundtrack composers like Jan Hammer (Miami Vice), Brad Fiedel (The Terminator) and Giorgio Moroder (Scarface). The music that Power Glove so deftly concocted defines Blood Dragon and proves that a stellar soundtrack can make a game that much better. Indeed, this is one of the best video game scores I’ve heard in recent memory.

It might be easy to view Blood Dragon as merely a re-skin, but I definitely did not find this to be the case. It’s a fast, clever, hilarious, action romp that knows when to slow down and allow the player to take it all in and move at their own pace. I had a great experience with this game, and I plan on revisiting it often. Well done, Ubisoft. Well done.