Papo & Yo is a puzzler platformer, but only on the most superficial level.  Players do push blocks around and jump over things, but Papo & Yo will also force players to wrestle with emotional issues like childhood abuse, alcoholism, and poverty in the Third World.

Papo & Yo is about a Brazilian boy name Quico who lives in a slum, and spends his time hiding from his abusive father.  Lucky for him, he has a rich imagination, and can escape his real life by going to another world inside his mind.  This world is a magical one.  It’s still a slum made of tin shacks, but it’s viewed from the eyes of a child.  Surreal and whimsical, magic hides in plain sight, and everyday objects gain great power. 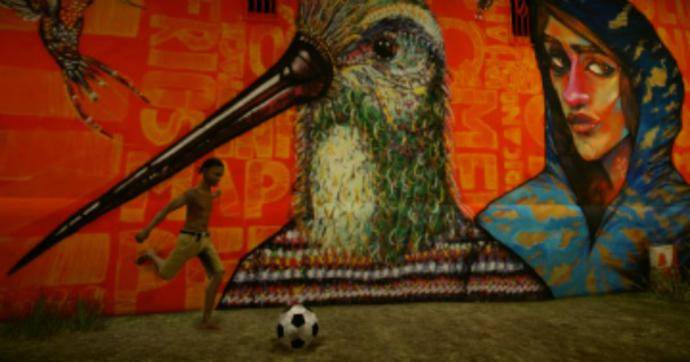 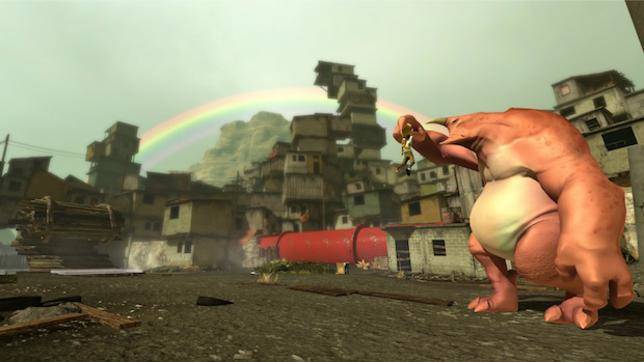 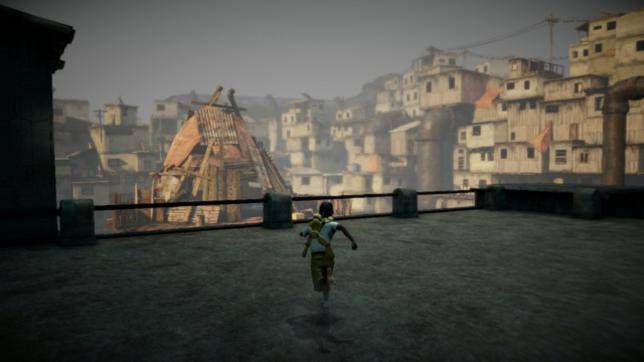 Quico quickly meets a girl who serves as his guide through this world.  She leaves a trail of chalk drawings and markings that allow Quico to create real objects by touching the two-dimensional drawings.   When trapped on a level without stairs, Quico need only find and touch a drawing of a staircase, and it will appear.  Gears drawn on the floor and walls with activate machines, a drawing of a key will open doors, and entire landscapes can be rearranged by moving around blocks.Through his journey, Quico is pursued by Monster, a hulking beast that looks a bit like a bloated humanoid rhinoceros.  Monster is usually content to go about his business, mostly ignoring Quico.  Unfortunately, Monster has a penchant for eating frogs, and when he does so, he turns into a raging beast.  When enraged, he attacks Quico and his friends.

This is an overt metaphor for abusive parents and alcoholism.  The second half of the game puts Quico through a series of levels where can only progress by keeping Monster from getting drunk, or finding ways to calm him afterwards.  This all reaches an evocative conclusion as the metaphors are pulled aside and Quico faces some harsh truths about addiction and abuse.These puzzles aren’t hard to solve.  They offer just enough challenge to make players think for a moment before discovering how Quico can make houses fly or reshape entire neighborhoods.    The platforming isn’t hard either.  Quico will make short and simple trips across rooftops and alleys, and players don’t need to worry about death, or having to replay long levels.It’s a short game, too.  Most players will finish it in under four hours, but the length and easiness are actually good things.  The designers have created a game that is short and accessible enough to ensure that virtually everyone who plays it will be able to reach the end of the story, and experience their work in its entirety.The debate about quality versus quantity becomes moot here.  Papo & Yo is a game that definitelyshould be played, especially by gamers who share a background with Quico and are looking for catharsis.  Other players can enjoy this experience as well, it’s a powerful and unusual undertaking that packs more emotion into its four hours than most games get out of twenty hours.

Papo & Yo launched as a Playstation exclusive last year, thanks to Sony’s “Pub Fund” which supports worthy indie games.  Although this is an excellent and definitely worthy choice for the Pub Fund, the game still arrived with numerous bugs and technical glitches.  It came out for PC this week, introducing Quico to a much larger audience, and thankfully cleaning up those bugs.  The PC version doesn’t include any new content, but there are graphical upgrades and other tweaks, plus the soundtrack can also be downloaded as a separate purchase.  It also has support for gamepads, which are highly-recommended due to the console-centric design.

Despite the short playing time, Papo & Yo is a game that should be savored, rather than plowed through.  The experience of playing it is just as powerful as having played it.  As Quico explores his world, players can stop and look around simply to take in the environment.    When I reached what I knew to be the final moment of the final level, I actually stopped and turned around to backtrack through the level for a few moments.  I didn’t want to leave this magical world.  Quico no doubt shared this feeling.