The Binding of Isaac Review

The Binding of Isaac

The Binding of Isaac is a 2D indie game, and is, without much of a doubt, near the top of its respective market. The game is based on the biblical story of the same name, in which a little boy called Isaac flees into his basement after having been imprisoned in his room and is now in danger of being murdered by his deranged mother, who believes that these actions must be undertook after, apparently, she was contacted by God ordering her to do so because of his sins. Whilst down in the basement, Isaac faces intense enemies and the continued wrath of his mother!

To begin with, The Binding of Isaac is a difficult game, a very difficult game. Almost instantly you are thrown into the fray and introduced to some of the games many horrific monsters, after simply having been told the controls just seconds before. These gradual transitions of complete peace and optimism are crushed with fear and doubt as the true nature of the game is revealed.

The game begins with the telling of The Binding of Isaac, so for the majority of people who are perhaps unfamiliar with the story, they are provided with a bit of back story so they actually know what’s going on. This is absolutely essential; otherwise the game will make absolutely no sense, which is more than likely to turn the game sour with most gamers. Luckily, The Binding of Isaac keeps us in the loop.

The game play is incredibly simplistic, but for people not used to using both the W, A, S, D keys with the arrow keys at the same time, it can be confusing to begin with. However, it does not take long to get the hang of, and once you’ve managed to get through the first set of rooms, it’s likely that people will settle into The Binding of Isaac nicely, and truly begin to appreciate what the game has to offer. 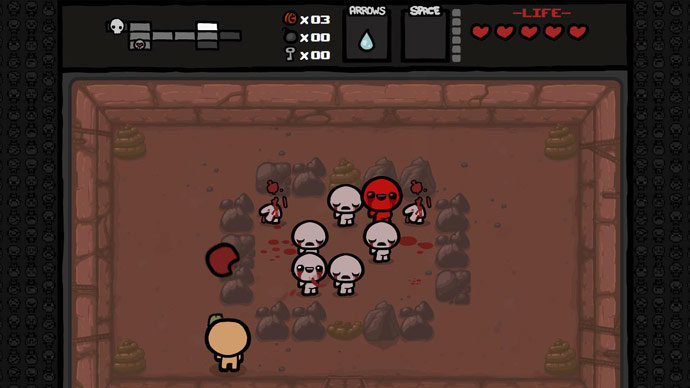 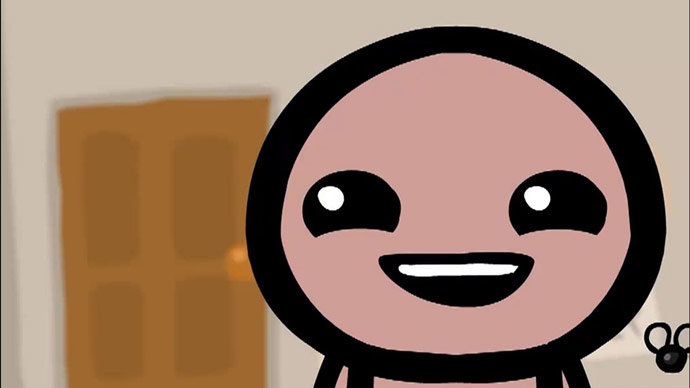 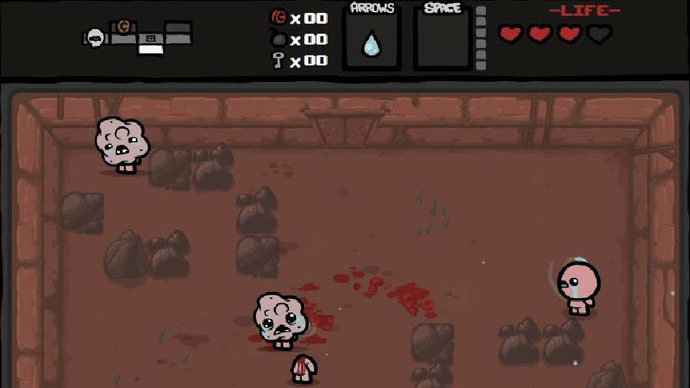 Understanding how the game works in terms of progress is easy. Gamers have to negotiate through six different levels in total, each one increasing in difficulty the further into the basement they delve. Each level consists of a varying number of rooms, which are either full of monsters, or if luck is on side, a unique item that provides some sort of boost.

Eventually players will stumble across the boss room, which is the only way down to the next level. There is one on each level, and the bosses vary every time. They can either be incredibly easy, or they can put all that you have gathered to use. The final boss is of course Isaac’s mother, which truly is a battle of the ages. I can only think so, because I’ve never actually made it that far!

The Binding of Isaac boasts around 6 playable characters, each with their own strengths and weakness, much like  most games out today. However, depending on the character, the game difficulty is completely changed, from being rather easy to being unbelievably hard. In order to unlock any of these characters, players must first complete challenges, which begin with Isaac. Isaac is the only character unlocked to begin with, but the others should follow quickly after the game has been mastered. The variety in game styles that have been born simply by changing the stats of the characters really makes this a player friendly game, as there’s a character for everyone. Unlocking them however, is not the case. Players have to work for the luxury of a character similar to themselves, and although it can be tough, it’s no doubt rewarding.

Like much of the game, the combat system is simplistic in nature, but thanks to the enemies, the combat in The Binding of Isaac gets very hairy, very fast! The characters in the game shoot using their tears, and the direction is changed though the use of the arrow keys. Since the enemies span such a large spectrum of difficulty, a large degree of success in combat situations in The Binding of Isaac heavily rely on multitasking. Surveying the room whilst shooting, dodging and using special items really takes its toll.

It’s safe to say that in terms of Game play, The Binding of Isaac is definitely a marathon rather than a sprint. I almost feel that the game is somewhat hindered by its difficulty, because despite the fact that it’s incredibly enjoyable, eventually it wears off to a stage in which the game becomes annoying as opposed to fun. Despite that, for the most part, The Binding of Isaac provides hours of fun that frankly can’t be recreated and, although its difficult, you won’t regret playing it.