The space shooter genre is relatively uncommon these days. In the 90s and early 2000s, though, they were a dime a dozen. These games were a staple in any PC gamers collection and recently there has been some minor interest in revitalizing the genre. Born Ready Games is composed of developers that obviously have an intrinsic love for arcade-style space shooters, and their Kickstarter-funded game Strike Suit Zero sets out to accomplish this daunting task. Story

In Strike Suit Zero you control an all-star pilot named Adams. He’s a rather silent hero, but he’s the premier pilot for the United Nations of Earth (UNE). In this future that Born Ready Games created, Earth has colonized space after discovering alien life. After new technology is discovered, though, a civil war breaks out amongst the colonies who are now attempting to destroy Earth. There are other characters featured in Strike Suit Zero, as well, but you never really get to see them unless they start speaking to Adams over their headsets and their picture pops up at the bottom of the screen.

The plot is paper-thin and the characters have no personality. The story does try to become inventive at times with a plot twist or two but the lack of characterization makes these efforts wasted. Fortunately, other aspects of Strike Suit Zero more than make up for this and the generic writing won’t make you want to shut down the game. 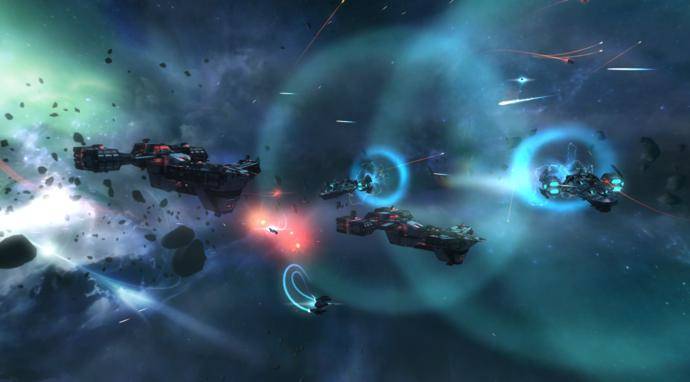 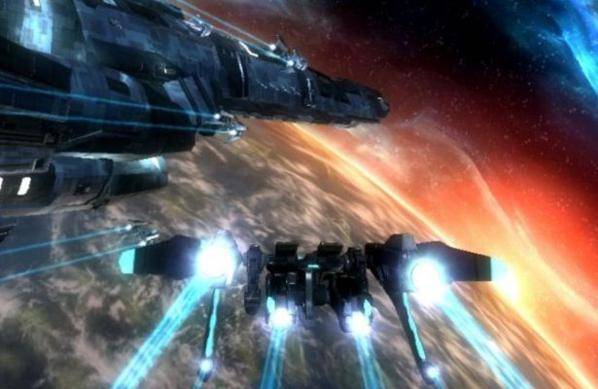 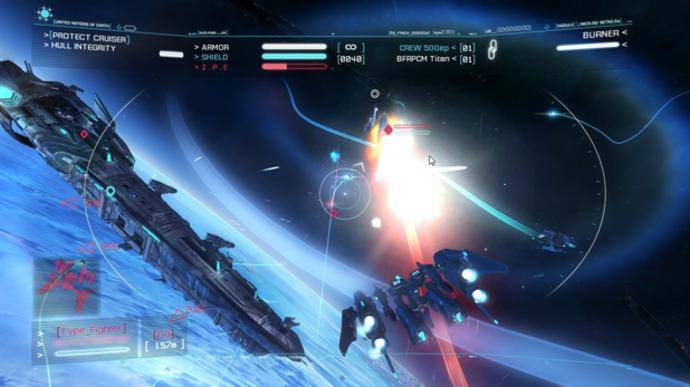 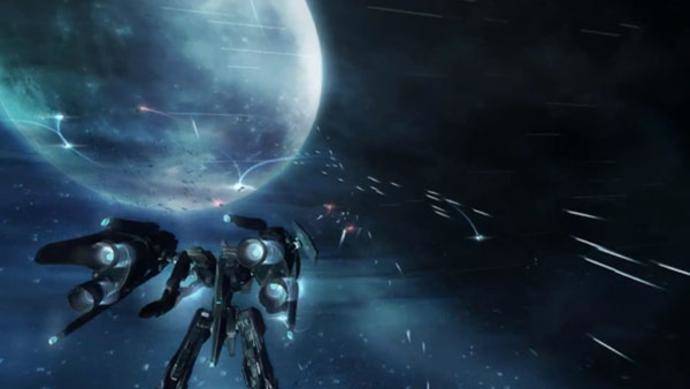 Veterans of classic space simulators and shooters like Homeworld and Freelancer will find themselves in familiar territory with Strike Suit Zero. As an added bonus to the space warfare one of the ships available to control is the Strike Suit – a mech similar to something seen in Gundam. The mouse and keyboard offer smooth controls to handle all of the ships and their bevy of weaponry. There are a few ships available that you’ll use normally as you progress through the story, like fighters and bombers, but some ships can only be unlocked by completing certain mission objectives.

The missions are fairly typical for the genre. Escort a freighter, protect a ship from incoming missiles, destroy an enemy fleet, etc. While this can be repetitive there is one clever thing about how the missions are designed: objectives that you tackle alone, while your fleet fights off enemies. This doesn’t necessarily make up for the tired level design, but it does bring attention to the fact that you’re playing a heroic pilot that can handle major tasks by himself. Not only that, but seeing all of the chaos surround you as you make your way to your destination provides for more immersion.

Shoddy missions aside, engaging in intense space combat in Strike Suit Zero is fantastic. The Strike Suit, especially, is outstanding to control and can blast away entire squadrons with ease. The Strike Suit isn’t completely overpowered, though, as it requires “Flux” in order to change forms and use its Strike abilities. Strategy is important because of this, but once you get the hang of switching forms in order to acquire more Flux you’ll be taking out enemy frigates in no time. The only thing about the combat that’s a little wonky is the targeting system that can be a bit distracting. Every enemy has a red triangle around it indicating that it can be targeted but switching targets is slightly inefficient unless you’re using the Strike Suit. This is particularly a nuisance when you’re surrounded by enemies and taking heavy fire. With patience the targeting mechanics aren’t so bad, but the developers could have made it more user-friendly.

After completing every mission you’re given a tally sheet that keeps track of your accuracy, how many enemies you destroyed, what kinds of enemies you destroyed and if you completed any special objectives that will unlock either a new ship or an upgrade to your current vessel. This certainly adds some replay value to Strike Suit Zero since you can easily replay any mission you’d like.

The graphics really add to the gameplay and overall appeal of Strike Suit Zero. The explosions are big and bold, the ships are well-designed and the Strike Suit looks absolutely epic. The background objects like planets and moons look magnificent with the lighting effects and bring the space scenery into focus This is by no means a graphically intensive game but Born Ready Games did an incredible job with what they had to work with. For a low-budget title, Strike Suit Zero’s graphics are very polished.

The composer of the original Homeworld soundtrack, Paul Ruskay, composed a wonderful score for this game. The music is primarily orchestral and the strings help to highlight the loneliness of space during the cutscenes and provide for more intensity during the battles. Overall, the soundtrack is effective in capturing the mood in Strike Suit Zero.

Despite some hiccups in the gameplay and mission structure, not to mention a rather mundane story, Strike Suit Zero does a great job in taking PC gamers back to the glory days of space shooters. While it’s not as good many of those games, it does capture the spirit of the genre and provides for some fun along the way.