Saints Row III seems like a hard sell. It’s essentially “Grand Theft Auto… But More OUTRAGEOUS” and it’s easy to imagine consumers thinking that GTA is already sufficiently outrageous. However, while the GTA franchise uses satire as a form of comic relief, that series is really a gritty crime drama at heart. Saints Row The Third is actually the opposite of Grand Theft Auto. Saints Row The Third is almost entirely focused on comedy with just a pinch of seriousness; it’s a game where players can team up with Burt Reynolds to fight Mexican wrestlers, zombies and purple women from space.

The Saints Row games are about a gang called the Third Street Saints, and players control the leader of that gang. In SRIII, players can build their character any way they like; customizing race, gender, appearance and getting to choose from six different “Personalities” each of which has a different voice. This lets players have anything from a stern Russian femme fatale, to a streetwise gansta, to a wisecracking transvestite (Yes, male personalities can be assigned to female bodies and vice versa).

The story and missions are equally “eclectic” to say the least. The main quest line is centered on the tale of a gang leader’s rise to power in the city of Steelport, but really the developers just threw in anything they thought might be fun. The Leader of the Saints will do things like fight rival gangs, but will also drive the Light Cycle from Tron through VR cities, or ride human ponies while being chased by dominatrixes, or fight aliens with ray guns. Plus much MUCH more. Why does our hero find herself fighting guys in hotdog costumes on the set of a Japanese game show? The only reason is that one of the designers at Voliton knew that players would enjoy it! 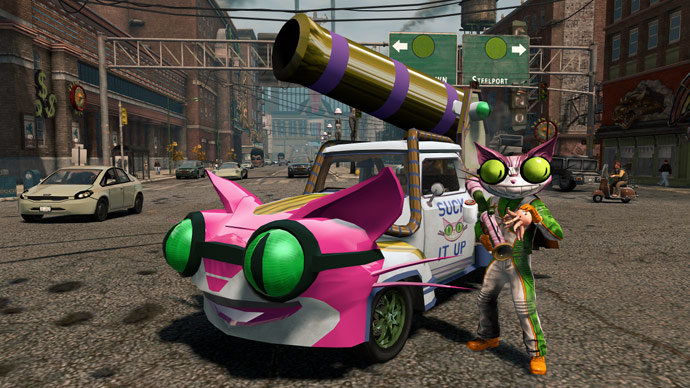 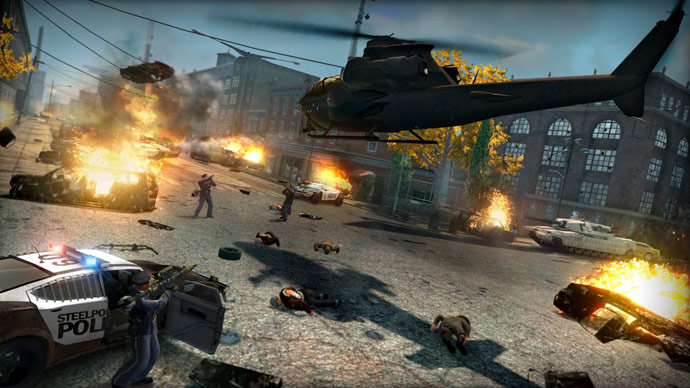 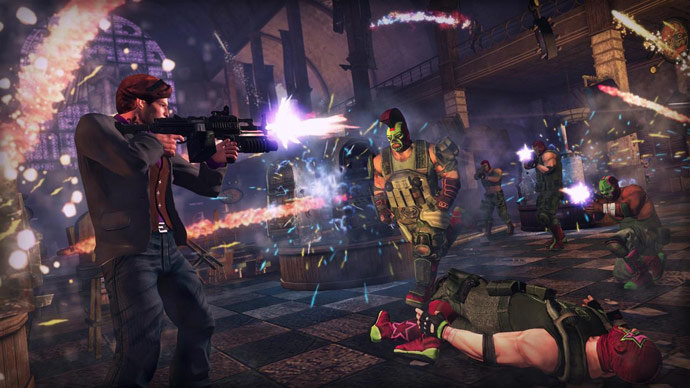 This “Anything Goes” attitude is a blessing and applies to mission structure, plot and characters. As players complete missions they’ll unlock new members for their gang and these “Homies” can be called in to help with missions, or to just follow the Player around. The gang grows more and more ridiculous as characters are added; a giant ball of yarn, a sexy alien princess, a trio of raver girls, even Burt Reynolds. Yes, Burt Reynolds licensed his voice and likeness to the game, and he’ll show in the car from Smokey and the Bandit to help players beat up bad guys.

Why? Because the designers figured it would be fun to fight zombies with Burt Reynolds… and it damned well is! The typical arsenal of shooter game guns is available, but SRIII adds in some particularly entertaining ones. Notably a shotgun that shoots chunks of bloody fish guts all over the target. As any marine biologist can verify, a person covered in fish guts will promptly be attacked by sharks, and sure enough, the sewers of Steelport are filled with sharks, so anyone hit by the chum gun will soon be devoured by a great white that bursts through the ground.

Vehicles are also unconventional. Early in the story there are normal cars, but as things progress there will be flying rocket cycles, space ships and a pink sportscar shaped like cat. Virtually all of these can be customized and upgraded so that players can keep a favorite vehicle in their garage and make it more durable than what is found on the street.

As a free-roaming game Saints Row The Third excels at encouraging players to just drive around looking for trouble rather than pursuing the story. The missions encountered during the story will usually unlock “Activities” that are hidden around town. So after completing a mission where the Player helps deliver contraband around town, a bunch of similar missions will appear, but can only be played if the Player happens to drive by them.

This sort of design inspires exploration, and gives gamers the confidence to just hop in their car and roam the streets knowing that something fun to do MUST be just around corner.

But it’s all in good fun…

Players can share that fun with the multiplayer experience. A second player can join in the story to play missions and activities, but there is also a “Whored Mode” (A spoof of the typical “Hoard Mode”) where players can fight off wave after wave of scantily-clad enemies (In single-player or co-op).

It launched on Xbox 360 and PlayStation 3, but the PC version of the game is highly recommended. At launch there were some issues with bugs, but these have been dealt with and now Saints Row The Third runs smoothly on mid-level PC’s. The major draw is that there is a small but devoted modding community who have created a vast assortment of mods. Notable among them are the mods that add in super powers.

One of the DLC packs had an all-too-brief sequence where the main character becomes a superhero, complete with the ability to run faster than most cars, and shoot fireballs. Alas, once that particular mission is over, the Player can never regain these abilities… unless they have the PC version of the game, and install some of the mods.

SRIII launched at the tail end of 2011 but there were several DLC packs over the course of 2012. Each of these adds a couple of hours of gameplay plus additional weapons, Homies and vehicles. The new content is high-quality, although the basic game definitely has “Enough” to do. There are also numerous other DLC packs that just add in new costumes, vehicles or weapons without new story-based content.

All of these were compiled together in Saints Row III The Full Package which was released a few months ago. The core game has enough crazy things to keep players interested for a good forty hours of play, but all the DLC packs add in even more absurdity, like aliens, superheroes and additional Japanese game show challenges.

The publisher THQ went bankrupt last year, but Saint’s Row III is still available and is frequently on sale at digital distributors. It is a must-play for lighthearted adult gamers. The Full Package is a worthwhile investment as well.