7.8Based on
2 ratings
Login / Register to rate.

Hotline Miami is an interesting indie title that was released in late 2012. The gritty game has received numerous awards and accolades, particularly for its soundtrack and gameplay. I’ve logged many hours playing through this ultra-violent offering from Dennaton Games, and it has been one of the more cerebral video game experiences I’ve had in awhile.

The game takes place in Miami during the Spring of 1989. The story follows a nameless man that receives odd phone calls from people telling him to go to a certain location to perform some mundane task. This task, however, is code for “go in a building and kill people.” These people you beat down throughout the game are members of the Mafia, and it is relatively unclear as to why exactly the main character is willingly following these anonymous callers orders. He seems to go through the game in a drug-addled stupor, and often has weird dream-like meetings with three men wearing animal masks. These odd men speak about the “hero” in cryptic language and add even more to the mystery of Hotline Miami. Between stages, the protagonist stops at a store, diner or bar where the same man is behind the counter in each one. The man behind the counter typically talks about the murders that have been happening in the city, and offers free beverages or food to the main character. While this isn’t much of a story it certainly adds to the intensity and uniqueness of the game by making you uncertain about what’s going on and encouraging you to continue on with these dirty deeds so you can find out what happens next. The ending is well worth your time and effort, as well, since it contains a few surprises. There’s even a bonus ending that can be unlocked if you discover all of the secrets hidden in Hotline Miami. 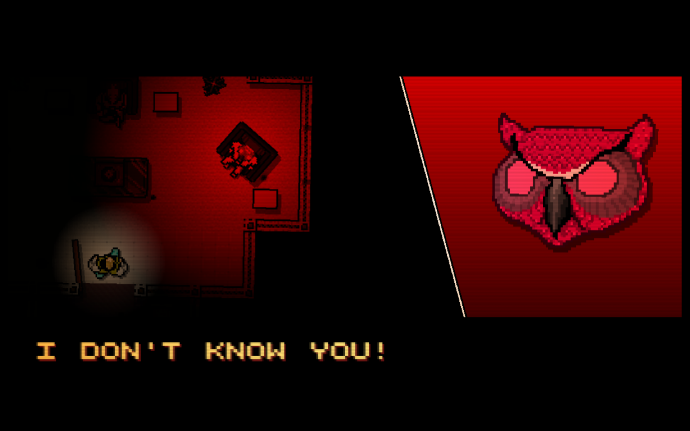 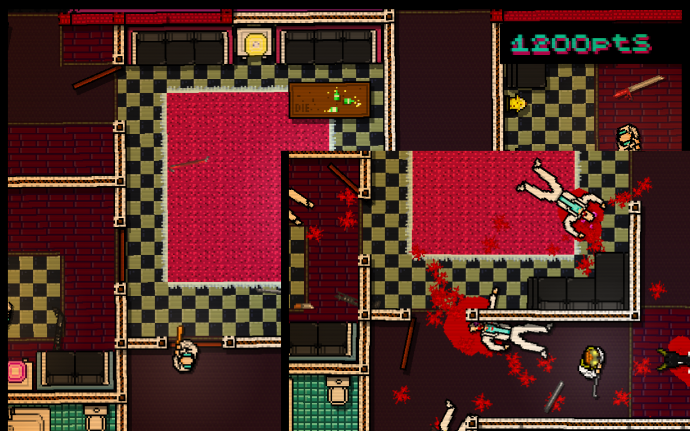 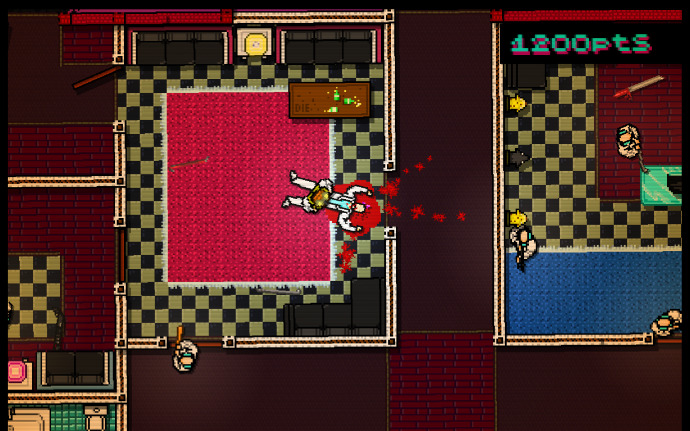 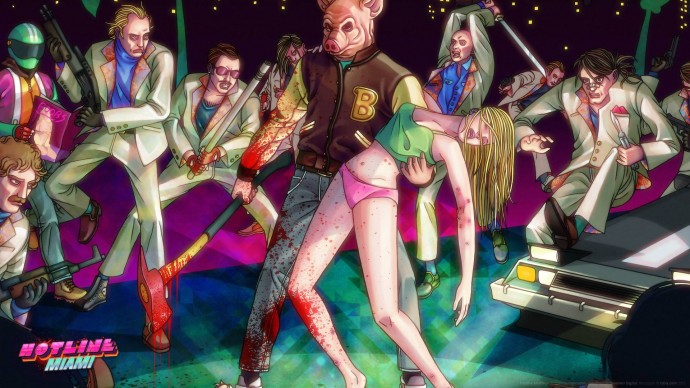 Hotline Miami’s game design is relatively simple. Each stage is in a top-down perspective, and requires you to control the unnamed masked protagonist while he makes his way through various buildings killing Mafia thugs. Most of the buildings contain a few floors, and some even have bosses to defeat or special items to retrieve in order to finish the level. You’re given a grade after each mission which is determined by a few factors, like how fearless you were with your plan of attack, different ways you killed bad guys and how quickly you beat the level. You get point totals, too, which unlock more weapons and animal masks for the main character to wear. These masks each provide different perks that can help with your success, such as make doors kill enemies, reveal secrets or make your guns silent. Only one mask can be worn per stage, though.

The game controls are tight, but might take some getting used to. If using a controller, the right analog stick is used to move the aiming reticule around the screen and turn the character 360 degrees. The left analog stick moves the character left, right, up and down. The trigger buttons are used to fire weapons, throw weapons and grapple enemies. Hotline Miami also controls rather well with a mouse and keyboard, too. In fact, I think I prefer the mouse and keyboard combo as it allows for more precision.

You will die a lot upon your first playthough of Hotline Miami, but this is to be expected. The enemy AI seems like it might telegraph movements, but it can be sporadic at times thus requiring a few attempts to finish most of the levels. The enemies also attack relatively quickly, and if you’re not paying close attention you’ll easily find yourself getting whacked. Surprisingly, this doesn’t get frustrating for a few reasons. For one thing, you respawn instantly and on whatever floor you were on when you died. Most importantly, because of how the game is designed, you will get better and learn how to tackle each stage as you progress through the game.

There are a variety of weapons at your disposal, but they should be chosen wisely. Because of how the AI works, guns (especially the shotgun) will seem tempting but they actually bring the attention of other foes in the area. You can use this to your advantage, though, and draw enemies out of different rooms to your location and pick them off one by one with a rifle or by slamming them with a door. Personally, I prefer melee weapons like baseball bats or knives because I don’t have to worry about ammo or alerting the entire room to my presence.

Much like the film Drive, which served as the game’s inspiration, Hotline Miami is a throwback to 1980s crime movies and has a “neon-noir” style. While the game looks like a 16-bit Super Nintendo game, the vibrant haze that consumes the game’s world add to the gameplay experience and give it a modern feel. It just feels right that the game looks the way it does, and I really can’t envision this game working if it looked any other way.

The sound effects in Hotline Miami are effective. Enemies struck by doors or blunt objects are met with a satisfying “thud” sound, knives and swords make nice squishy sounds as they’re impaled into people and firearms provide loud booms and rat-a-tat effects. The soundtrack is even better, and might even be my favorite part of the game. Electronic music artists like M.O.O.N., Sun Araw and Scattle recorded some funky, psychedelic and beat-driven tunes that encapsulate Hotline Miami’s atmosphere. The music works perfectly with the gameplay, and can even help you get into a rhythm as you plan your course of attack. The also helps to lessen the frustration of getting killed repeatedly since that only means you’ll get to listen to the music longer. This is easily one of the best video game soundtracks to come out of 2012.

Hotline Miami definitely deserves all of the praise it continues to receive. Despite having some wonky controls at times and containing some moments of repetitive gameplay, this game is something special. Rarely do I ever see a game in which every core element works together, but they all do in Hotline Miami. Dennaton Games nailed it with this one, and I’m more than excited for the sequel.