Facebook games have earned a well deserved reputation of being not very good and usually a cheap cash in. They usually consist of uninteresting gameplay and long wait times that you can bypass by paying real life currency, so when I first heard of Square Solitaire Duel, I thought it would be a solitaire game with everything I just described with an energy bar that makes you wait or pay up every time you play a couple of games. I was wrong on a lot of factors…

What is this game exactly?

Square Solitaire Duel is a casual game made for people who just want to have a good time. The gameplay is not solitaire even thought the title of the game states that it is. While playing you’ll of laying down cards in a 5 x 5 grid laying down different combinations of cards, the more complex the combination, the more points you get. 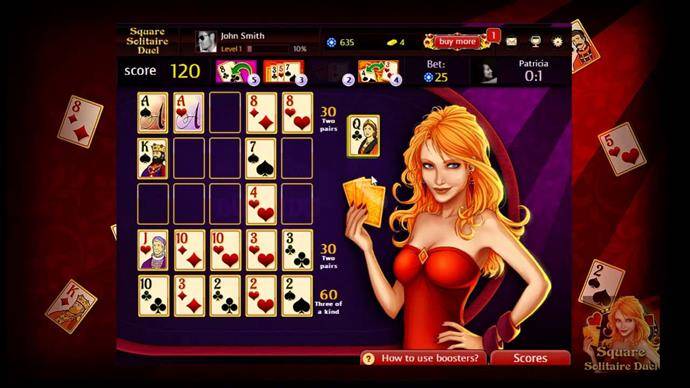 The game is focused on multiplayer, having no single player aspects at all, not even a practice mode, which can be excused since it is a game that is on Facebook and therefore being directed to be played with friends. There isn’t any real time multiplayer, it’s the type where a person plays one round and waits for his/her’s opponent to complete their round. After that the scores are added up, whoever has the most points from making different combinations of cards wins. The game doesn’t have an energy system which is surprising for a Facebook game – you can play as much as you want for as long as you want.

The game is presented neatly, it’s all illustrations but they are well drawn. All the information is presented clearly and the game looks good for what it is. The sound design also manages to hold its own. There is a loop that plays in the background and the cards sound good when they are placed down.

Why some people may dislike it

The game is presented neatly, it's all illustrations but they are well drawn.

The game is incredibly simplistic, it’s literally just placing down cards and waiting for your opponent to complete his round after you have done yours. There are no rewards for playing and there isn’t much to do with the in-game currency apart from buying ‘drinks’ that do nothing.

Square Solitaire Duel isn’t a bad game for what it is, the title is slightly misleading considering it’s not solitaire at all but instead a unique card game. It’s presented nicely and it’s free, but these don’t manage to help that it’s incredibly simple.