Old-timey PC gamers might recall a game from the 80’s called Shufflepuck Cafe, a science-fiction air-hockey sim with overt influences from Star Wars. The new PC game Shufflepuck Cantina Deluxe takes the same concept and allows modern gamers to experience the exotic thrills of Air Hockey… IN SPAAAAAACE!

It’s a silly idea, and unabashedly so. The deliberately absurd plot puts players in control of an astronaut who crashes on a desert planet that’s a lot like Luke Skywalker’s homeworld of Tatooine. Naturally, the only way to earn money for repair parts is by playing air hockey with the patrons of a local hive of scum and villainy.

Everything about the aesthetics is as close to Star Wars as the designers can get without being sued. The background music, the sound effects, the alien and droid character models are all eerily familiar, and Star Wars fans should get a few smiles out of the “Hey that guy’s dressed like Han Solo” brand of humor. There are nods to a few other sci-fi franchises too, like Hitchhiker’s Guide, but it’s mostly based on Star Wars.

The cantina is divided into several sections, each with its own handful of characters to meet. Players can challenge these familiar faces to play a game that’s just like air-hockey, only it’s played on a space-age hologram table. Each of the opponents has their own special ability that affects the puck somehow, such as causing it to move in a non-linear path or freeze in place for a moment. Players can eventually learn these special powers to use for themselves too. The NPC opponents have dialog and quests which require the player to win matches in specific ways in order to earn rewards like Experience Points, in-game money, or parts to repair their spaceship. 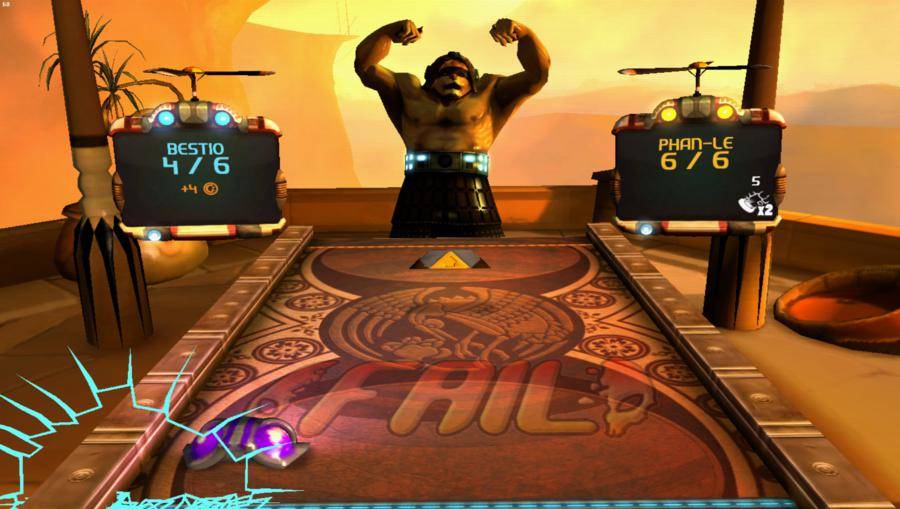 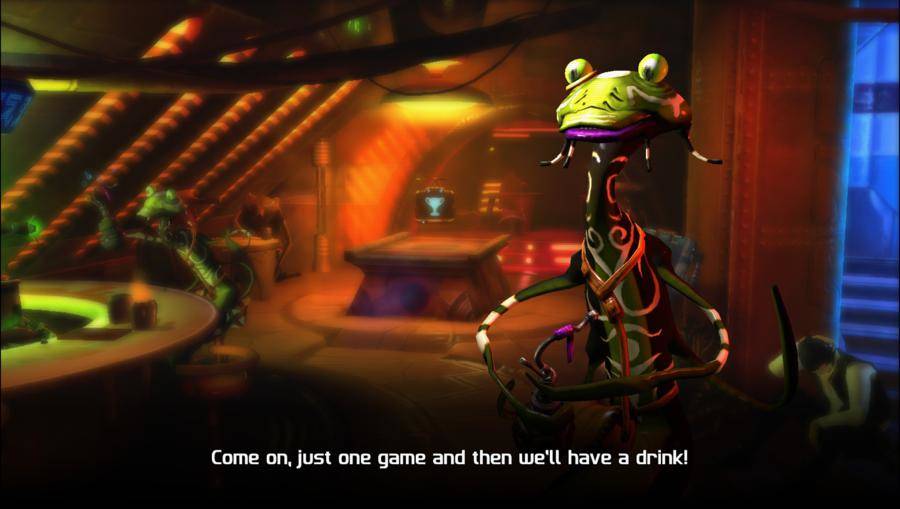 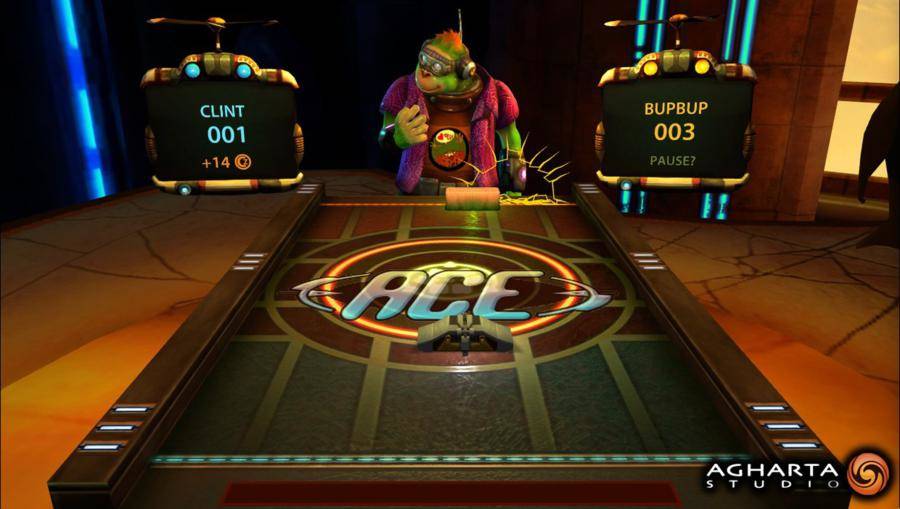 Although the Star Warsian references are entertaining, they will wear out their welcome for most people. Each character only has a few animations and sound files, and these will all be used up in one match. Players have to grind their way through match after match with the same handful of enemies before they earn enough in-game money to unlock new locations and opponents. The same money is also used for buying new pucks and paddles, as well as buying quest items, so players will end up playing against the same characters over and over again before they earn enough money to buy basic upgrades.

The idea of repairing the spaceship becomes a distant, long-term goal that can only be attained by playing a an enormous amount space hockey.

Welcome to the Sarlaac Pit

Star Wars fans will likely find that the grind for “Credz” gets in the way of exploring the world and meeting the characters. There is a system of “Missions” where players can earn extra credz and experience points by doing things like following the developer on Twitter or just playing the game for a long time, but most players will find a new definition of pain and suffering as they slowly level up over a thousand years.

On the other hand, gamers who tremendously enjoy virtual air hockey will find that Shufflepuck Cantina has enough variety to keep it interesting over the long haul. The use of special powers will keep players on their toes, and the upgradable equipment adds a level of strategic planning when preparing for a match. Certain pucks and paddles are especially effective against certain opponents, and players will slowly (Ever so slowly) gain their own special powers by defeating enemies.

The agonizingly-slow progression is likely the result of Shufflpuck Cantina’s original business model as a mobile game. There, the slow progression was an incentive to make players buy in-app purchases of extra credz, but on the PC it’s just an annoyance that will hopefully be addressed in future updates. However, greybearded nerds who have a nostalgic fondness for the old Shufflpuck Cafe will likely want to grab Cantina.  So will players who live at that peculiar demographic intersection of Sci-fi geek/Air Hockey fan. Shufflepuck Cantina Deluxe is available now for PC and Mac with other editions of the game are available on mobile devices.