The Pros and Cons of Blocking the Second Hand Market

More than once, the second hand video games market has been called worse than piracy. Like piracy, the actual creator of the game gets absolutely nothing from your playing their title, but unlike if you’d just downloaded the game for free, you’re actively giving your money to somebody else, and the difference in cost that that makes is often either very small (a matter of £2-3, especially at launch) or available specifically because the developer isn’t getting a single penny from the sale. 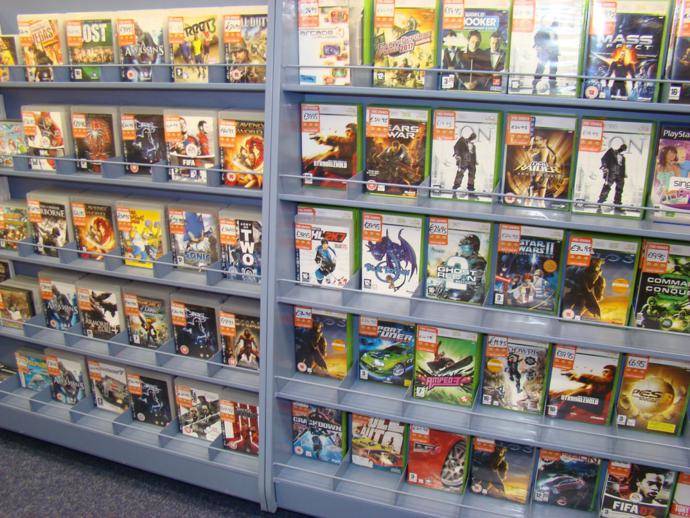 With the next Xbox again rumoured to block used sales, we take a look to see just how abolishing the used games industry might benefit both the industry and the consumer.

The most obvious argument against getting rid of the availability of second hand sales is that it would be – this word again – “anti-consumer.” Without the choice of buying a game used, the end user would be forced, perhaps by gunpoint, to purchase full price. Imagine a world where the likes of The Walking Dead: Survival Instinct stay at £40 for years on end, because there’s no incentive for the developer to drop the price. It’s a game that benefits from fans of the series buying it without really knowing anything beyond its characters and the logo stuck on the front, and if not for the thousands of people trading it in a few days after release, there’d be no real reason to drop the price.

In theory, this could end up very badly. Developers could specifically tailor game-fixing DLC in the knowledge that you’ll buy it, or just have the game sit on your shelf gathering dust. They could charge you £40, then improve the game with small, paid updates – almost micro-transactions – which individually improve the shooting mechanics, the puzzles or the difficulty balancing. These updates would, of course, not specifically be for that, but would be labelled under some coy euphemism. Not happy with how shaky actually hitting your enemy can be? Buy the head hunters pack, which lets players more accurately target specific parts of the body. Perhaps the lag in an online game is getting you down? Pick up the high priority pack, and it’ll never be an issue again…

You get the gist.

This is something that’s very, very possible, but it also reads like something written by somebody in a tin foil hat (in fact, mine is having the smell of roast chicken beat out of it). Developers COULD do that, but technically they could do it now. I know a lot of people have complained about cheat codes or early unlocks/auto-levelling DLC, but all of it is is at least easily explained. It gives gamers with less free time the chance to do things much more quickly. For a core gamer who can spend 100 hours a week playing games, it seems like a petty thing for developers to do, but to the core game who can only spare 2 or 3 hours a week, this sort of DLC is a godsend. Speeding up the experience, or even just making that experience slightly easier with bigger and more badass weaponry or moves, is something that absolutely should be available as DLC, so long as it doesn’t replace anything in the game.

The point is that it’s nice to have a choice. If you can’t understand the idea of someone selling a level-skip as DLC, and especially if the only reason you can come up with has you accusing the company selling as being greedy, then the DLC is not targeted at you.

No, DLC could definitely be abused by those wanting to take advantage of their customers who have no other choice but to hold onto a title forever. That’s not the only problem though. It puts a pretty thick line through the beginning and end of the next generation of consoles. Once a game is sold out, you’ll never be able to buy that game again (unless you go digital, although that’s a discussion for another day). There’s a good chance I could walk into my local GAME store and walk away with a PS2 classic. If the used market was gotten rid of, in ten years time there’s likely to be absolutely no way to buy these titles, especially if a company goes bankrupt and their games disappear from stores. THQ‘s closure is a great example of how quickly things can go wrong, but imagine if all of their games had had to have been recalled from retail. Those games will have basically disappeared from existence.

Depending how deep the used system is, this could actually build up a new used market, a far seedier affair than anything Gamestop has done. Users who buy up copies of rare games, knowing there’s only a specific physical amount, will be able to sell them on at a much higher price a few years down the line. More than that, consoles with the licences for collections of rare physical games will go for a bundle on Ebay, with clever sellers making hundreds, if not thousands off of people’s want for a product that no longer exists.

All of this is more long term than perhaps many people are thinking. Perhaps the most immediate problem is that games will be more expensive. Final Fantasy XIII-2 and Resident Evil 6 both dropped in price very quickly thanks to the amount of used copies flooding in. Within weeks of release, both games were sub-£20. For somebody who wanted to play Final Fantasy XIII-2 or Resident Evil 6, you honestly can’t knock the value of waiting, but with the used market gone, that would never have happened.

There’s another way of looking at that last example though. Both Resident Evil 6 and Final Fantasy XIII-2 sold very well on the used-market, to the point where only a person dedicated to giving their money to the developer would be silly enough to buy full price. The difference between Final Fantasy XIII-2 new and used was, soon after release, about £25. This causes two things to happen. Firstly, those that planned to trade it in anyway will realize that the rapid amount of trade-ins means the price they’re getting back is going to be massively reduced. Even when Resident Evil 6 was still £35 used, CEX were only giving £15 for it. My game had cut by a third in value within only a couple of days.

My first reaction was “trade it in.” It didn’t matter than I hadn’t finished it, it didn’t matter that I still wanted to continue; if I’d have got £15 back, I could probably pick up the game used several weeks down the line for a fiver and not have the whole thing as a giant loss. In the end I decided to keep it, but how many others panicked, rushing their copy back to the store before their credit was basically useless? This rush, in turn, pushed the value down even further which pushed the “proper” sales down. Say what you want about Resident Evil 6 and Final Fantasy XIII-2, if sales suffered it was because of the used market. If I can buy a game that’s getting mixed reviews for £10 instead of £40, I know what I’m going to do.

Abolishing the used market would clear up situations like this. “But why is this good for the consumer?” I hear you ask. In the long run, it’s not. Maybe you bought Resident Evil 6 cheap and hated it, maybe you loved it and felt you’d got a bargain. In the long term it means that the developer is getting far less money than they should. This might sound like a good thing, for those that disliked the games mentioned, but in reality that isn’t true. Capcom knows how many of you played the game used, they can see which achievements you earned and how often you played. They know there’s a market out there for Resident Evil 6.5, they just have to work out how to crack that market.

In other words, they need to work out how to convince you to buy Resident Evil 7 brand new. The new games sell better than the old ones, so that draw is out, but blocking parts of the game or selling an online pass is a very viable option.

The best part about getting rid of the second hand market would be that all those things we’ve had to put up with which developers utilize to compete with the second hand market would be gone. Without GAME and co threatening not to sell certain games new – a move they CAN make because they know they’ll get second-hand games in after only a few short days – digital prices will drop, and as brick and mortar stores struggle to compete on new titles, rather than on second hand titles, the physical price will drop as well. This will mean more games will need to be sold on the part of the store, who will look to push more than just the top ten Call of Duty clones.

Blocking the used market will suck at first, but as more money is going into the publishers coffers, they’ll be able to sell less in order to make a profit. They’ll be able to take bigger risks, knowing that a million copies sold doesn’t actually mean a million copies sold and re-sold again and again. The total amount of titles sold will be the total amount of titles sold.

The biggest problem lies with stopping end users from selling on their titles, or borrowing them to their friends, once they’re done with them. Why shouldn’t people be allowed to sell what is, after all, a physical thing, their property? Stopping them from doing so would be easy, and with the likes of Steam currently embroiled in a lawsuit over users being stuck with their games, I wonder what it would take for people to let Microsoft off the hook? Maybe they might trade in their licence over Xbox Live, allowing Microsoft to sell a new disk with the same code. For that, you’ll receive Microsoft points or money in your bank account. You wouldn’t even have to go into a sweat-filled game shop. Would that be enough to help people accept a new form of ownership?

Blocking used games seems like a terrible idea on the surface, but there are just too many variables to make a proper educated guess. Without it actually happening, it’s impossible to know how much the end user will benefit. In the short term, it seems like they’d be stuck buying games at fall price, regardless of quality, but in the long term being more selective in what you buy might actually help to bring the prices down. That depends entirely on the benevolence of the companies involved. Would they pass on the savings? If they suddenly started making millions more profit, would that be a good thing or would they just find some other problem to sob over? It’s too difficult to tell.

Part of me wants Microsoft to have blocked used games from the next Xbox, because it’s something that I feel it going to happen at some point in the future. By taking a stand and saying right away that used games absolutely cannot be used on the system, they’re taking a risk, but it’s a risk that may pay off. Developers, currently swooning over the PS4, might be enticed by higher sales figures and more money, and in the end, one choice is no choice at all. We’ll all get used to it, and maybe we’ll benefit and maybe we won’t.