By combining both previous PixelJunk Shooter games into one package and giving them a graphical facelift, Q-Games has combined two great games and made them even better. PixelJunk Shooter Ultimate HD provides hours of fun and challenge. With Playstation Plus currently offering it for free, it won’t lighten your wallet but it will give you hours of entertainment.

An exploration and puzzle game in a twin-stick shooter skin.

Going off of the title, I was expecting a typical twin-stick shooter with enemies constantly surrounding your ship. At its base, Pixeljunk Shooter is an exploration and puzzle game in a shooter skin. You encounter enemies, but that’s not where the challenge lies.  As a small spaceship, you move through a rocky environment filled with lava, ice, water, gas, and more. You are tasked with saving scientists from an underground expedition gone awry. The design of each level feels like an ant farm with many tunnels to find and navigate. Secret areas abound with diamonds and powerups as rewards. You clear each level by saving the scientists and collecting diamonds throughout the environment. The final level of each area is only unlocked after gathering enough diamonds throughout the other levels in that area. This encourages the player to explore each area thoroughly.

The greatest strength of Pixeljunk Shooter is the environmental gameplay that feels like a game of rock/paper/scissors. To clear areas, you must use lava to melt ice, water to cool lava, light gas on fire, and the ships missiles to blow up rock. It’s so much fun to enter each area and try to figure out how to use your abilities and the surroundings to get to each of the scientists and save them. Q-Games did a good job of adding more abilities to your ship, such as magnetism, to vary the ways to get through each area. By doing this, it kept the progression fresh while building upon already mastered skills. 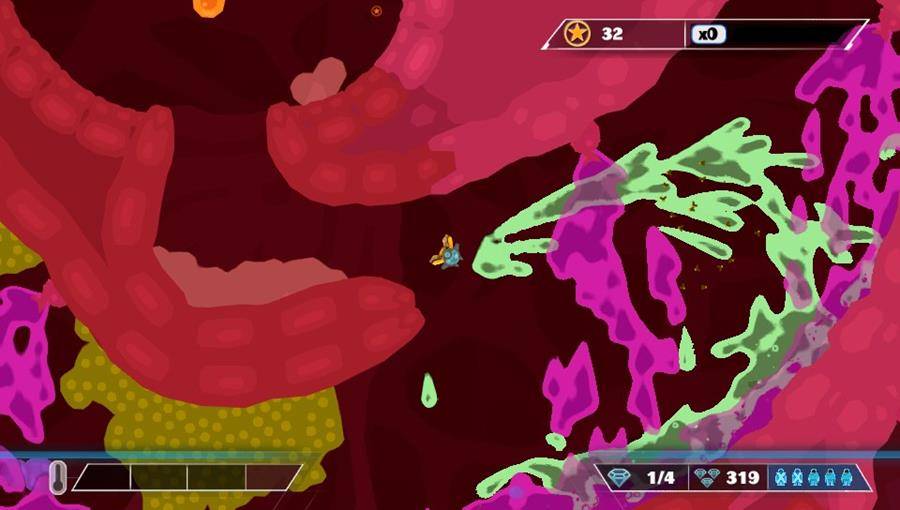 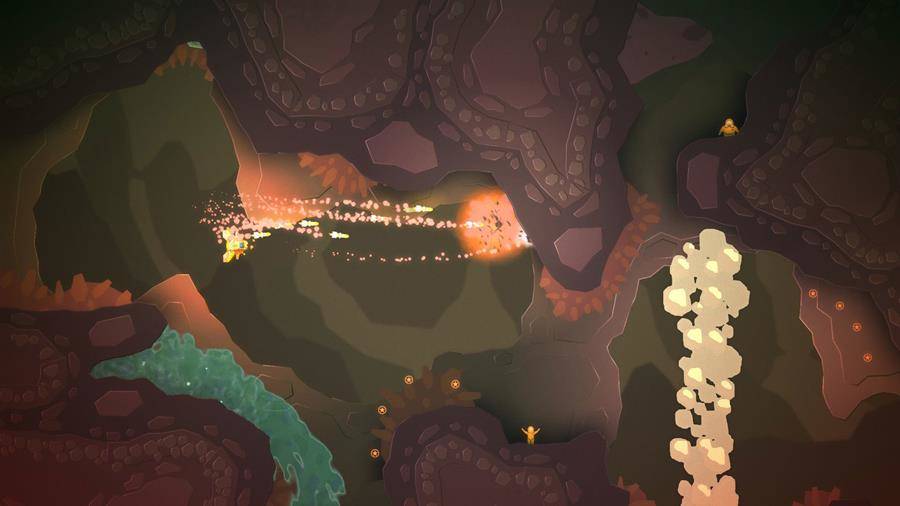 The graphical improvement is noticeable and runs at a buttery framerate. This version is definitely the best of the previous games. The environmental effects look great. The physics of each element act as you would expect, which is vital to your success because something as simple as touching your ship to lava results in an instant death. You must be very careful as friendly fire is enabled and scientists die with one misplaced shot. I died more than a few times by splash back from shooting lava at ice walls. This cautious progression created tension within each level.

Pixeljunk Shooter Ultimate is another Playstation game that features cross-save and cross-play. All progress made on the PS4 version can be transferred to your PS Vita version and vise versa. There is also a multiplayer mode where you can play cooperatively with your friends on either platform as well as a competitive mode. In the competitive mode, which is head to head multiplayer, the defensive player tries to rescue the surviving scientists and take them back to their “safe zone”, while the offensive player attempts to take out the scientists. Its a fun, more frantic mode that has a very different feel than the single player mode. I did encounter lag on most matches in this mode, which I hope will be fixed in a forthcoming patch.

This version is definitely the best of the previous games.

While frustrating at times due to the increasing difficulty with each successive level, I had a blast (pun intended). With over 150 levels, there is plenty of challenge awaiting you. Even being free currently through Playstation Plus, I would gladly pay the regular $15 price tag. So board your ship, there are scientists that need your help.