Infinity Ward have fixed a lot of the issues that plagued Ghosts at launch, but there’s one thing they can’t fix: the size and shape of the original multiplayer maps. They’re too big, with too much going on. In trying to combat camping (by creating a “always open” feel wherever you go), they’ve made it ten times worse. That’s why it’s fantastic news that Onslaught – the new DLC pack, available on Sony platforms since last Friday – has smaller, tighter maps to explore. Does this solve the problems left in the poor design of the base levels, or does it just open up a whole new can of worms?

Onslaught is a 7-piece, £11.59 piece of DLC consisting of four new maps, a new Extinction level and a couple of weapons. Overall, the feel of this pack is a little more whimsical than the more serious base levels, as can be seen in the mood and settings of each level.

What's nice about Bayview is that it's sunny and pedestrian

It’s also worth noting that one of the maps, Ignition, is a remake of a Modern Warfare 2 map. It works, incredibly well in fact, and actually improves on the original in many ways (although, simply getting rid of all the constant kill streaks goes a long way towards helping out).

For the sake of this product – several splintered, unrelated pieces of content – we’re looking at each piece individually.

Bayview is multi-tiered. There are levels, everywhere. You can’t enter a building or walk into a courtyard without also coming within a few feet of steps or a ladder. There are several points on the map where you’ll be able to look over huge chunks of the area below, which feels pretty cheap when you come across a team that’s working together and camping.

What’s nice about Bayview is that it’s sunny and pedestrian. This isn’t some converted military base, it’s a seaside boardwalk, with shops and everything else that implies. This makes Bayview stand out, mainly because it’s so different from the original set of locations. It’s also a fan favourite, so if you play in the Onslaught-specific lobbies, expect to see this one a lot.

The most stand-out part of this map is a trolley, which constantly travels around the map. PR videos suggest you place a sentry gun on there, but this doesn’t really work (because it’s easy to sneak behind something that can only look 180 degrees. and which is constantly moving around a point). Instead, people are currently using it as a mobile fortress of types. That doesn’t work either, and chances are, it’ll soon fall into complete disuse. 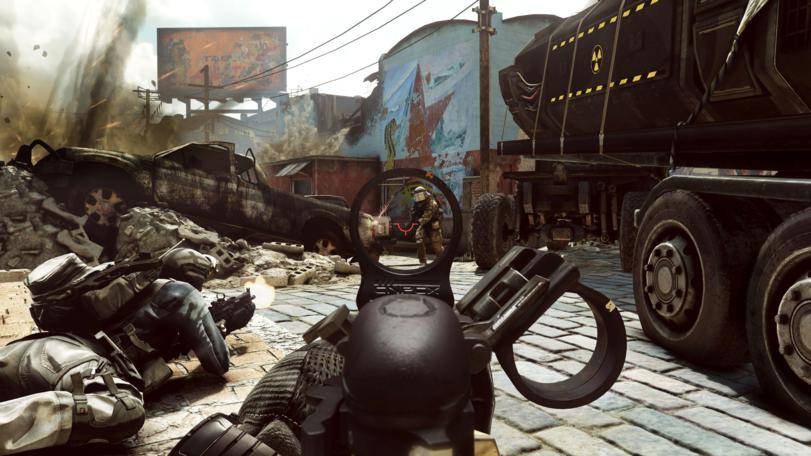 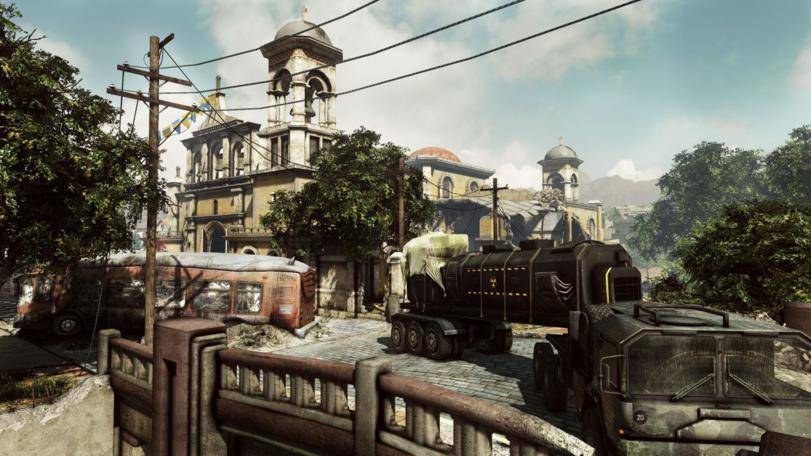 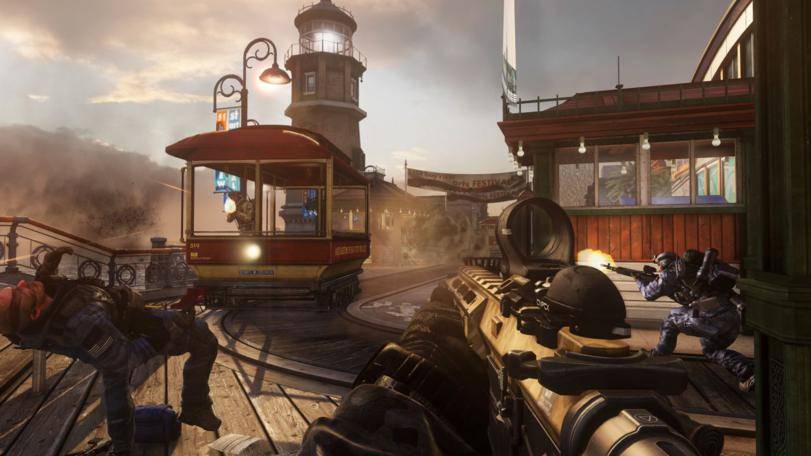 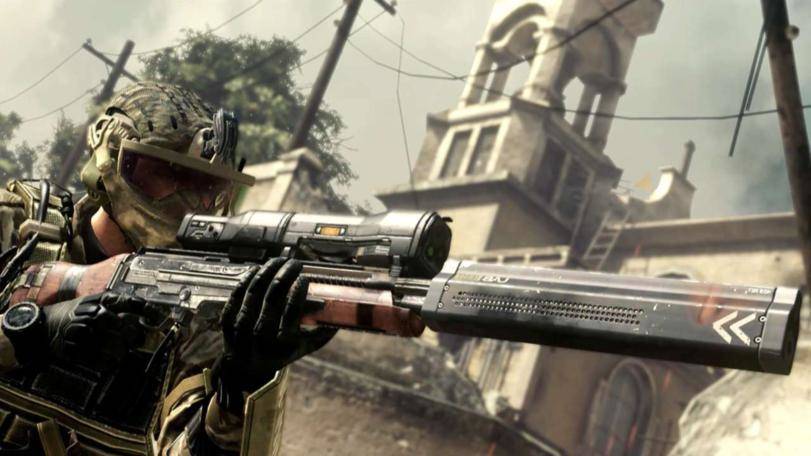 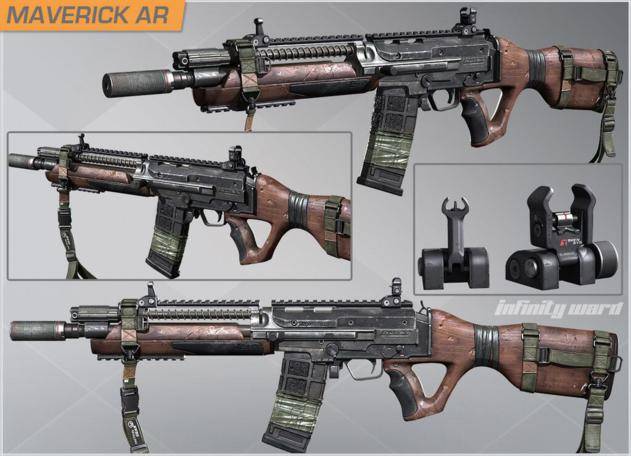 This map does little to get rid of the crowded feel that plagued the original maps. There’s too much going on, and without seeing a constant 360 degrees, you’ll be randomly killed more often than you’d like. Several areas are built for camping, and too often your entire team can be mowed down by small groups manning those areas. It’s an interesting, nice-looking map, but it’s very Ghosts.

Containment takes place in a small Mexican village. Again, Infinity Ward have tried to allow for both close quarters combat and long distance sniper-battles, and it doesn’t really work. There’s little in the way of cover, and unless you’re very lucky (or very talented) you’ll going to end up either in a one-to-one game of chance or being shot by someone from a distance.

Michael Myers is a nice touch but it doesn't shake up the gameplay all that much. It's a licenced bauble to entice fans of Halloween

One thing makes Containment stand out: it doesn’t feel as cluttered as Bayview, nor as cluttered as the levels in the main game. There are three clear lines of movement, and they don’t tend to cross. You’re probably not going to get decimated by someone who can see across the whole map, and you’re not going to suddenly drop dead after being sniped from someone who shouldn’t have been able to see you.

So although it’s largely forgettable in regards to design, it’ll probably be one of the more enjoyable maps from the new pack. It’s not Call of Duty at its best and there’s little opportunity for anything outside of being the fastest shooter, but it works.

The key part of this map is a lorry, on a bridge, spewing nuclear waste. By completing a field ops, you get a mortar strike that destroys that bridge, and any enemies too close to it. This transforms the centre of the map, but does little else. It’s a nice idea, but the payoff isn’t as good as perhaps it should be, especially considering a care package might net you a helicopter, or something else that could net you more than one or two kills.

Fog is the black sheep of the pack, so completely out there that it always takes a little getting used to when it rolls around. It takes place in a thick, dark woodland, with caves and abandoned houses. It’s something out of a horror movie, and it’s a nice change of pace.

Less nice is the fact that Infinity Ward built it around one point. There’s a house at the back of the map, surrounded by caves and walkways. Every single match becomes a fight for this house. It’s open, it’s easy to shoot from and you can see absolutely everything. A talented clan, working together, could probably play a perfect match from this house.

And while it starts off interesting, it becomes quite repetitive, more so than the mood or map itself can make up for. What should be a wide, open interesting match ends up being part travelling, part taking the house, part waiting to die. If people played the other two thirds of the map, it’s be far better, but they don’t.

By completing a field op, you get turned into Michael Myers. It’s a nice touch, especially with  music suddenly playing in the background, but it doesn’t shake up the gameplay all that much. It’s a licenced bauble to entice fans of Halloween.

Ignition is “inspired” by Scrapyard from Modern Warfare 2, which is the Activision way of saying it’s practically identical. The layout of the level is exactly the same, with a few minor changes to add a few underground sections. The textures are different, and the location seems to be different, but it’s the same map.

Don’t think for a second that I think this is a negative thing. It’s not. Ignition is the best map in the pack, and it’s fantastic to play Scrapyard again but with co-op and without kill streaks working towards other kill streaks.

It doesn’t feel too crowded, there’s plenty of cover to hide behind – it’s a map that works, as a Call of Duty map should. It’s a great addition, but it’s hard not to be slightly put off in that it so obviously displays the difference between then and now.

Two weapons – one gun. This is the first time Activision has offered downloadable weapons, and it’s easy to see why. Those without the gun will be quick to call pay-to-win, although it’s not quite that bad. It’s a very capable gun, noticeably better than quite a lot else on offer. Even so, it’s not so over-powered that it’ll change the entire layout of the game. This isn’t going to be the weapon to end all weapons. Very few people, even in the Onslaught lobbies are even using it, so there you have it.

The Maverick is available in assault and sniper variations, and works well in each.

Extinction mode has seen a lot of flak since Ghosts was released, mostly from people who claim it’s just Infinity Ward’s version of Zombies. Those people are wrong. It’s more akin to Left 4 Dead, although not nearly as involved, and it’s quite good fun. The second part of the Extinction series comes with Onslaught, and it’s more of the same.

It’s a new location, there’s a new sort of alien and that’s about it. If you didn’t enjoy it before and never played it more than once, you won’t find Nightfall any more enticing. Fans will enjoy the heavier story and more challenging moments though, and the new Phantom type will force you to think a little more which is always good.

Onslaught was never going to live up to its cost, not unless you play an awful lot of Call of Duty. The maps are varied and interesting, but for the most part do little to fix the problems of the larger, main-game stages. Still, it’s a step in the right direction, and fans of the franchise will find little reason to complain if they choose to reinvest.