Yearly franchises rarely manage to surprise, but this year Assassin’s Creed did just that. The franchise that originally had you climbing up rectangular buildings in the Middle East has now taken to the waves, adding ships, exploration and naval combat aplenty. It wasn’t a change that happened over night, but Black Flag shows how far the franchise has come, and, as our view at the top our pirate ship attests, it has come an awfully long way.

Assassin’s Creed III had its problems. The main character, Connor, was a poor successor for Ezio, and while things like running through trees and mostly optional ship sections were nice additions, there were also a few too many steps backwards for it to really satisfy that Assassin’s Creed itch. That’s before you even mention the glitches, which made parts of the game nigh unplayable at launch.

It seems hard to knock the turnaround - the plot is more interesting, the locations more vibrant...

None of these problems exist in Assassin’s Creed IV: Black Flag, or at least are not nearly as bad as they were in 2012’s outing. This is helped massively by Edward Kenway, Connor’s grandfather and a bit of a rouge. A charming character, and one that it’s easy to enjoy. His plot is more interesting than Connor’s, and not only because of the more exciting “romantic” film-friendly location. It seems the developers have remembered this time that location isn’t enough – meeting famous people and being part of famous events isn’t all that interesting if the fiction doesn’t back it up.

It seems hard to knock the turnaround – the plot is more interesting, the locations more vibrant and with more to do and a main character who you will absolutely want to spend more time with. The biggest fault with Edward is that we already know how and when he dies (limiting possibilities for further adventures), and that we know how his son is going to turn out.

Aside from that, much of what was good about Assassin’s Creed III returns and is improved. You’re still able to climb upon trees and such when in the thick jungles of the Caribbean. Collectables and upgrades work in much the same way but have, again, been improved. My favourite is the replacement for Ben Franklin’s notes. In Black Flag it is sea shanties that you must catch, offering a wider range of songs your crew will sing while on the high seas. 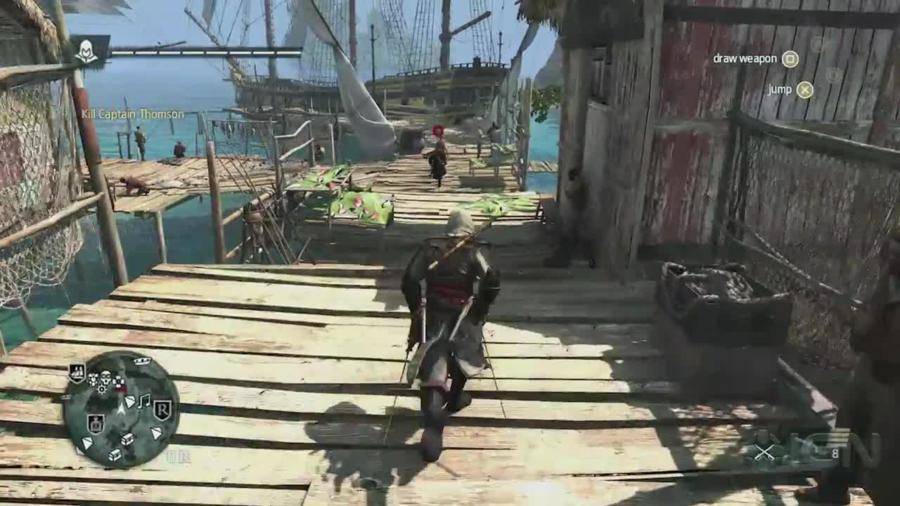 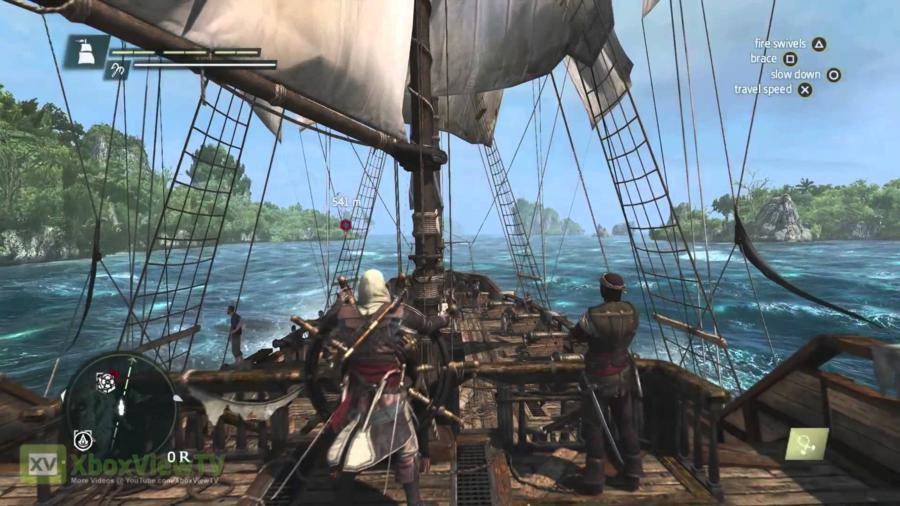 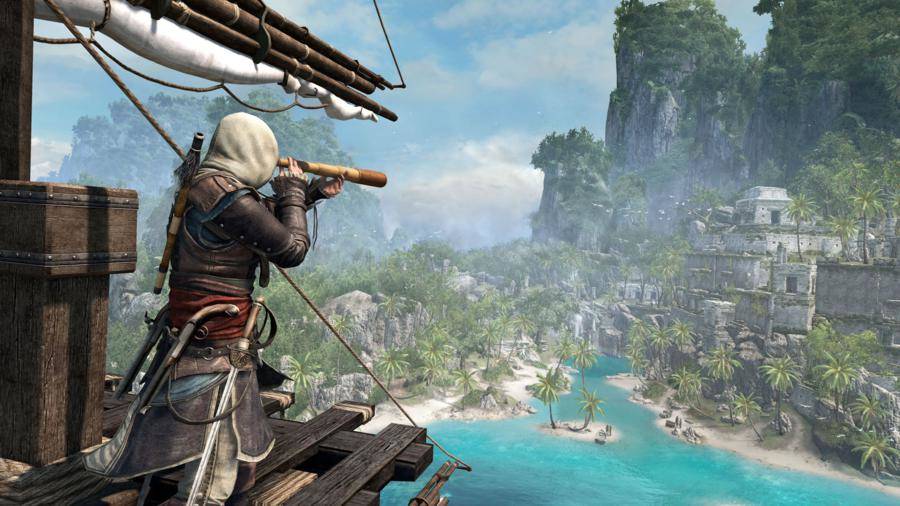 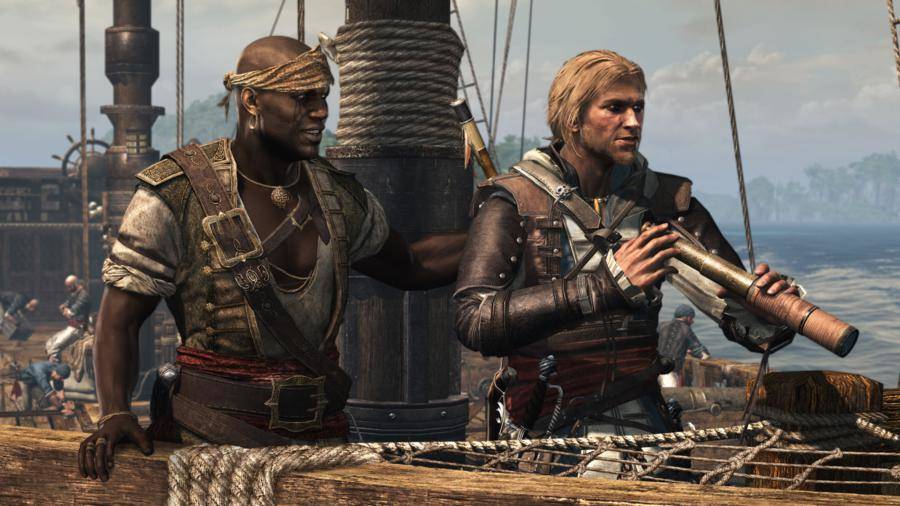 In many ways, Black Flag is very much an Assassin’s Creed game. The way Edward moves is instantly recognisable, and the towns are built in a very Assassin’s Creed style. In other ways though, the developers have gone in a completely different direction.

Life on the High Seas

Ever played a game where the side missions were so addictive that you hardly bothered with the story? Perhaps Grand Theft Auto V was the last game to truly offer something like that, and Assassin’s Creed IV: Black Flag is just as playable. With an entire ocean open for you to explore, housing dozens of islands with things to find, it’s sometimes hard to get from one place to another without being distracted.

Even if you’re not one for collection, the ship battles are equally as fun and you’re never far from the opportunity to cause some mayhem.

Yearly franchises rarely manage to surprise, but this year Assassin's Creed did just that

And as interesting as the main missions are – and they really are quite enjoyable – it’s in the extra stuff that you’ll find the most to see. Each of the main towns has a number of shanties to find, treasure chests to unlock, things to buy, Animus fragments to grab and animals to hunt. There are also Assassin missions as well. There are quite a few towns to find, many of which you’ll come across in general play, and then there are more collectables out in the uncharted ocean.

These aren’t boring either. The PlayStation 4 version of this game is so gorgeous that it would be easy to sit and just explore for hours without feeling bored. The graphics are absolutely stunning. Exploring is such a pleasure when you so often come across breathtaking vistas and landscapes.

Ship battles are equally enjoyable. Controlling your vessel is simple, perhaps slightly tighter than in Assassin’s Creed III. Actually fighting has been made easier as well. The end result still needs a little concentration, but is far easier to control and far simpler to master. It would have been easy to get this wrong – if the boat hadn’t moved correctly in the water, if the controls had been at all off – but Ubisoft have really got it all spot on.

The Assassin’s Creed open world usually consists of a few massive cities and perhaps a little bit of wilderness. That has changed in Black Flag. There’s now a whole lot of ocean and then some cities. This changes the dynamic of play slightly, as you’re never in one place for too long.

As you’re exploring, you’ll often see other ships on the horizon. Using your trusty telescope, you can see what that ship is carrying and from there decide if you want to attack. You won’t usually need to think about it for long.

With a number of weapons to use, as well as a trusty ram that means you can just charge into an enemy ship, taking on enemy boats is simple and varied. The rewards are rich and the only real risk of fighting a lot of enemies is that you get to fight more enemies. It’s a win-win.

Upon weakening an enemy ship, you can either board it or sink it. Boarding it will give you an objective or two to complete – usually killing a certain number of enemies – and then you’ll have the full cargo and the option to repair your own vessel or use the ship for your fleet.

Cargo can be used to upgrade your own ship or can be sold for a profit. You’ll need an awful lot if you’re aiming for that platinum trophy.

There’s a mini-game, much like the Assassin’s mini-games in previous titles, that lets you control a number of vessels in a world-trekking menu-based game of chance (well, kind of). You’ll be given a number of missions, you’ll be told the chance that a mission will be successful with your current set of vessels and then you can send some of your fleet off to do the dirty work. This can result in special acquisitions and bonus money, and all it takes is time (and a little luck).

Aside from a few minor glitches and the odd control issue, Black Flag is almost the perfect game. It's definitely worth owning on PlayStation 4

Not only can you explore the islands around the ocean, but you’ll also get the chance to go beneath it as well. There are a few locations where you can jump in a dive bell and explore sunken ships. Tangling with sharks may be necessary (and it isn’t always clean), but the riches you’ll get in return make it more than worthwhile.

And talking of sharks, you’ll also be able to hunt them (alongside a lot of other creatures as well). It makes for a fun side mission, harpooning sharks and whales, but don’t forget to feel a pang of guilt when your catch is hung from the ship looking something like a hedgehog.

If hundreds of hours at the high seas isn’t enough to convince you that Black Flag has enough content to fill an aircraft carrier, just hold your horses. There’s also a return of multiplayer. It’s not massively different to the last few outings, but it is significantly faster (faster than Assassin’s Creed III, anyway). There’s still a feeling that it’s slightly laggy, but those that enjoyed it before will continue to enjoy it now.

Assassin’s Creed IV Black Flag proves that years franchises aren’t necessarily bad things. How the franchise evolves from here is going to be interesting. In Black Flag they’ve made the absolute best Assassin’s Creed yet, but it’s probably never going to see a repeat performance. They’ve captured lighting, and they need to do it again from scratch next year lest features that are fresh and exciting now too quickly grow stale.

Aside from a few minor glitches and the odd control issue, Black Flag is almost the perfect game. It’s definitely worth owning on PlayStation 4.