Pac-Man and the Ghostly Adventures Review

Pac-Man and the Ghostly Adventures

Pac-Man and the Ghostly Adventures – Introduction

If you’re a core gamer of yesteryear, you can stop reading here. You will hate Pac-Man and the Ghostly Adventures. Whatever you felt Pac-Man was about – how you felt he spoke, where he lived, what his reasoning behind traversing those mazes was – The Ghostly Adventures will throw that all back in your face. It’ll take decades of quiet appreciation and turn every facet of that appreciation on its head.

If you’ve got young kids, especially kids who enjoy the TV series of the same name, this’ll probably be a strange but ultimately memorable experience for them. Everybody else would probably be better steering clear.

Pac-Man is a school kid in a Pac-Land attacked constantly by ghosts. This is pretty much in line with Pac-Man and the Ghostly Adventures, the Disney XD TV series. That should give you a clue at the demographic for this one, and those of you picking up the latest Pac-Man game just for the name probably want to hold off.

Pac-Man and the Ghostly Adventures is a fine game, under very specific circumstances

That’s not to say that the link to the TV series puts it above criticism. The jokes are lame, the characters devoid of charm – it’s pretty mindless stuff. If you’re a story-driven gamer, you’ll find little reason to carry on. Perhaps the best way to highlight the characterisation problem is that, when flying through a Futurama-esque transportation tube, Pac-Man shouts his own name out. Why? Nobody knows.

Pac-Man and the Ghostly Adventures is a third person platformer in the same vein as Jak and Daxter or, more aptly, Ratchet and Clank. It’s not quite had that level of attention though and is instead bordering on generic. Levels are built around the same set of resources, so you’ll face the same problems, use the same power-ups and traverse the same buildings across each different world.

At it’s most basic, you’ll simply travel through a level (following pellets, naturally), fighting ghosts when they show up. This is as easy as facing them and hitting the attack button. When there are more enemies around, you can “scare” them (which turns them all blue and stops them attacking) and grab them all without risk. When you’ve killed them, you take their eyes – no kidding, just their eyes – and at the end of the level, Pac-Man burps them out. Jesus, can you imagine a more grizzly image for a child’s TV tie-in? 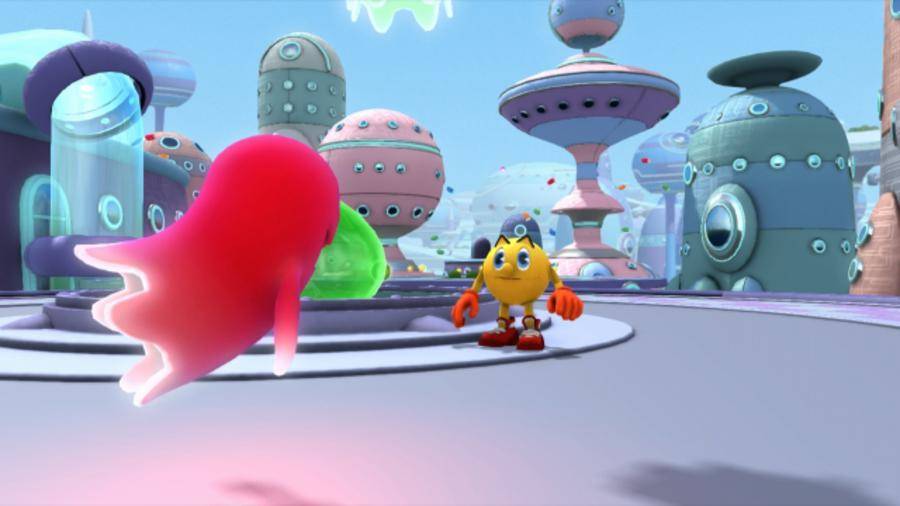 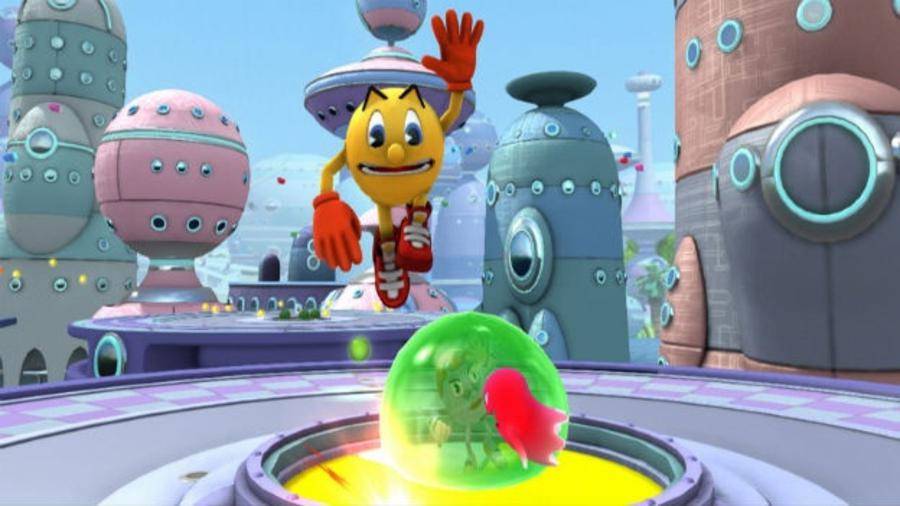 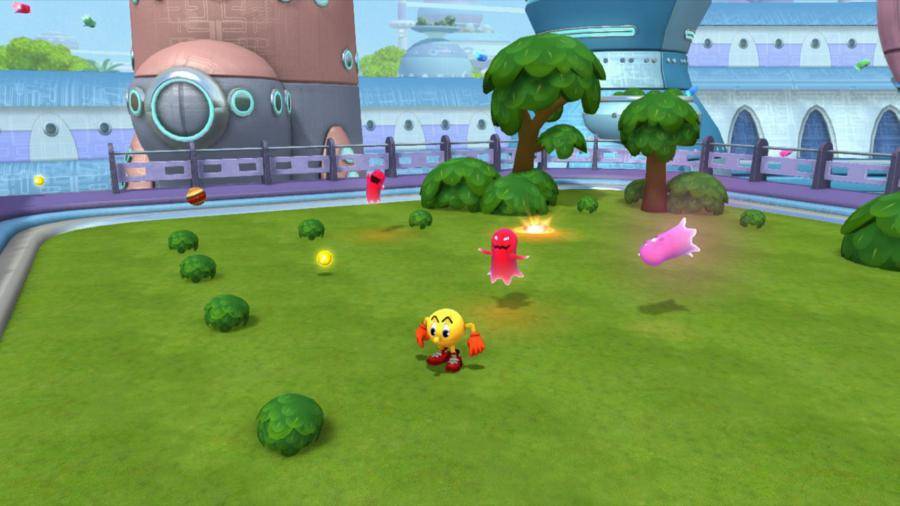 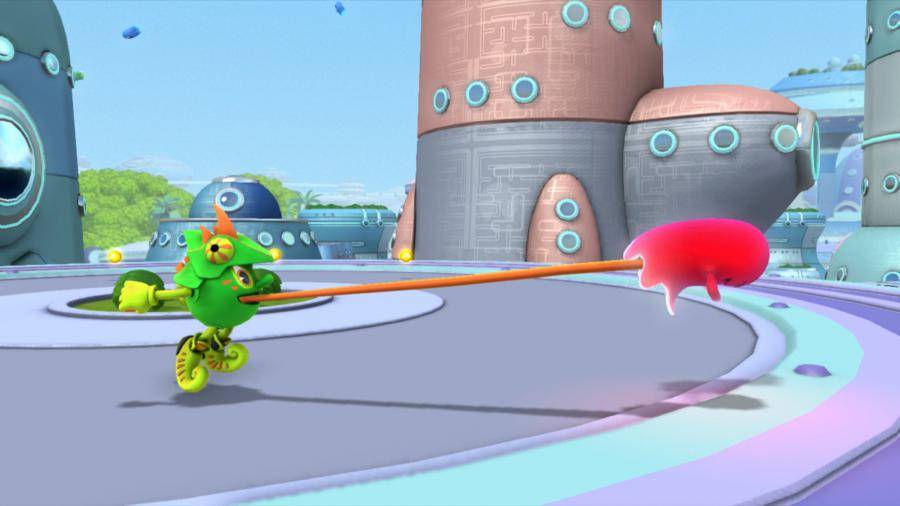 The blandness of the levels and of the control scheme is shaken up slightly by the addition of power-ups, but even these are a little dull. They allow you to explore in different ways, or offers a few extra powers (like freezing the ghosts), but are so plentiful that they become old fast.

You’ll occasionally come across something that seems especially difficult, that needs either perfect timing or for you to act in a certain way. This is an odd choice, considering the demographic, and I can imagine there beings a few frustrated tantrums attached to some of the later levels.

Despite the by-the-numbers gameplay and annoying as hell characters, there does manage to be some semblance to the Pac-Man of old. The (local only) multiplayer, for instance, is set in a maze and has you collecting power-ups. You play as the ghosts and must attack Pac-Man and his friends, but at least there’s a maze.

When you've killed them, you take their eyes and at the end of the level, Pac-Man burps them out. Jesus, can you imagine a more grizzly image for a child's TV tie-in?

The whole game feels like something that’s been made on a budget. This isn’t an AAA blockbuster, and nobody ever thought it would be. The graphics, on PC, at 1080p, feel squashed and bulky, and the sound design is repetitive. You’ll hear the same catchphrases again and again, even within the first level. Both are passable, or there abouts, but only if you’re not paying too much attention.

Even under those circumstances, there’s no escaping the fact that this just isn’t a good game. It works, is the only positive thing I can say about it. There aren’t any glitches or crashes or unexplained frame rate drops. If it had gone a few steps further, it might have been a capable platformer, but instead ends up just being a shadow of other games in the genre.