Last gen the action adventure genre evolved into something far more controller, more linear than it ever had been before. The likes of Uncharted and Tomb Raider put personality and story ahead of pitting you against a cave and tasking you with getting to the end. It’s funny then that it’s so easy to see Deadfall Adventures as a bad copy of these games when actually the developers have gone back to the source.

That’s not to forgive Deadfall for making a few painful choices, nor the occasional twerk (it’s far more obvious than a nod) towards Uncharted (especially in terms of music and character), but you may be surprised how much it has to offer.

I have to admit, within the first few minutes of playing Deadfall Adventures, I was ready to write the whole thing off. Notepad in hand, I compared the story and voice acting to something more typical of some low-budget softcore spy game than an adventure title. It didn’t help that the theme music sounded almost like a Uncharted number, recognisable but not entirely identical.

Within the first few minutes of playing Deadfall Adventures, I was ready to write the whole thing off

The writing was terrible, the voice acting disinterested. It seemed nobody wanted to be involved with this project, and, by extension, neither did I. The developers of Deadfall Adventures put their worst foot forward, and stumbled.

The rest of the game is basically them getting back to their feet. Sometimes they fall again, mostly they don’t. What Deadfall has going for it is that, in many ways, its entirely unique. It blends old-school shooting standards with puzzle solving, decent graphics and fantasy. There’s nowhere else you’ll get this experience, nowhere else that offers anything nearly like it, for better or for worse.

Your adventure will take you across the world, through ancient tombs and Arctic tundras. Exploration is key to full enjoyment, and you’ll often find yourself going off the beaten path and finding treasure or hidden rooms.

Treasure is more interesting than in Uncharted (although it’s also less regular) in that it helps you to level up your skills. This adds a reason to care about exploration, and it really works. The added health and stamina boost my interest in finding treasure, which adds value to the game as a whole. It was a clever move on the part of the developers and is one that I wouldn’t mind crossing over to other franchises. 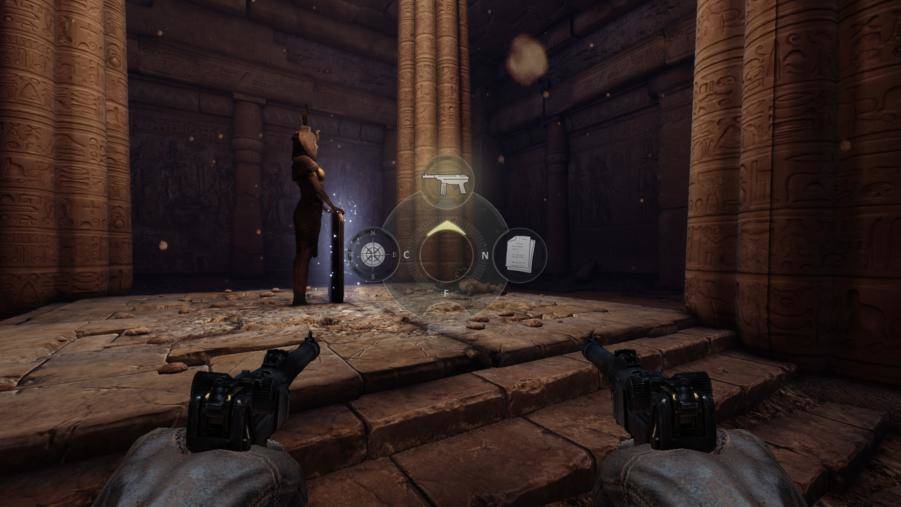 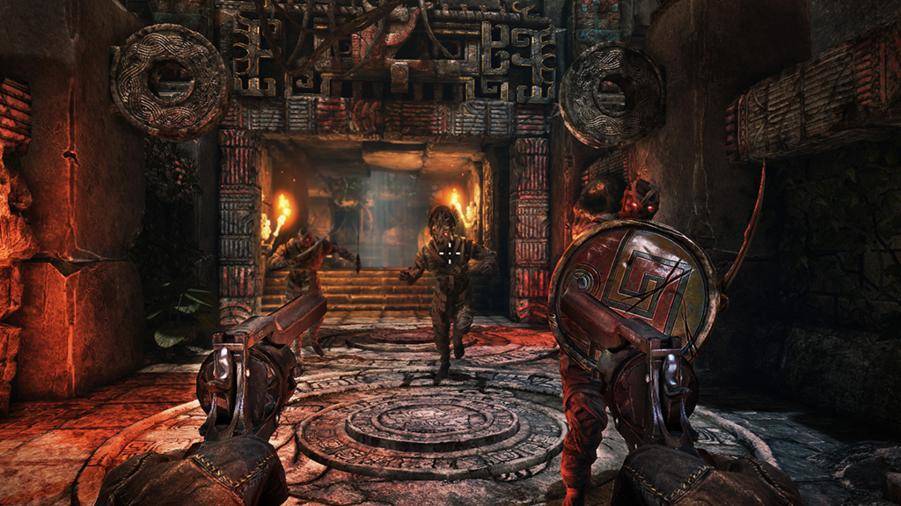 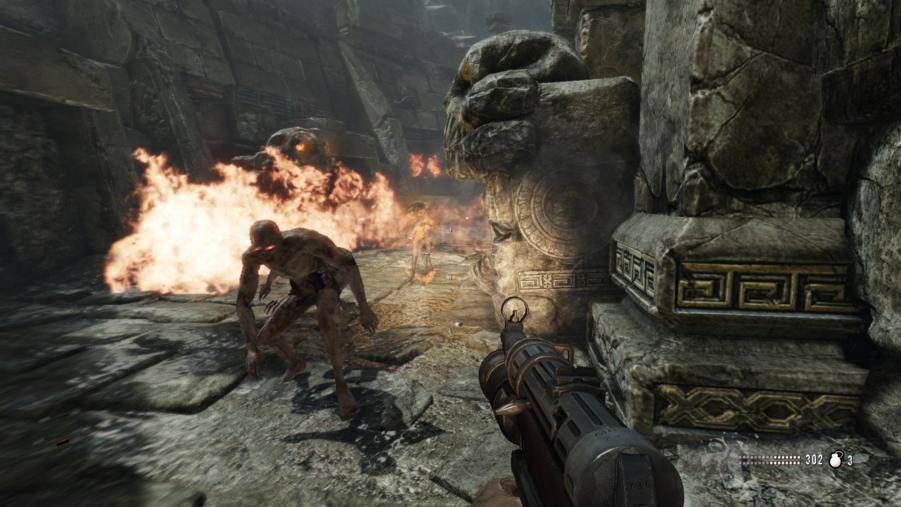 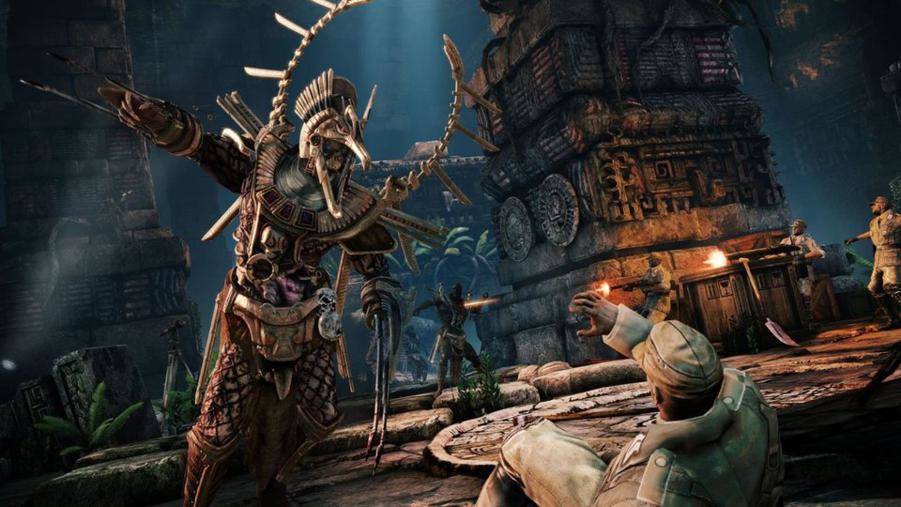 Thankfully, exploration is quite interesting in its own right. Don’t let the relatively lifeless character models fool you: the environments are often beautiful and interesting. More than a few times I entered a room open-mouthed, impressed with the scale of the design.

Once you’ve progressed to a certain point within the tomb, you’ll end up in a fight. It’s like it throughout the whole game: traverse, fight, traverse, fight. Fighting is as standard as pointing in the right direction and shooting.

Fans of finishing games quickly will love how easily enemies generally go down, and that you don’t even need to be an especially good shot to kill someone. Indeed, I shot at a Nazi and missed by a foot or so, but he was such a good sport he went down anyway.

It still manages to be relatively good fun, if a little mindless.

You might think that things become dull after a while, but they don’t really. The levels are perhaps a little long, but there’s enough action and variety in each that you never feel more or less bored than when you finish. It’s not exactly a glowing reference, but you’re not going to hate the gameplay in Deadfall Adventures, especially not if you managed to sit through and enjoy things like Perfect Dark back in the day.

It helps that many of the puzzles are simple enough to stump you for a few minutes – as a distraction from the shooting – but not so much that it’ll break the pace of the story.

I’ve seen Deadfall Adventures described as generic by some, clichéd by others. It’s a difficult thing to review. It’s based on the adventures of H. Rider Haggard’s Allan Quatermain (you play as his great grandson). The Quatermain novels are incredibly influential and no doubt served as a large part of the basis for Indiana Jones, which served as the basis for Tomb Raider and Uncharted…

Is it fair to accuse the developers of Deadfall Adventures of being too similar to Tomb Raider and Uncharted when actually they just wanted to create a game based on the Quatermain novels?

So is it fair to accuse the developers of Deadfall Adventures of being too similar to Tomb Raider and Uncharted when actually they just wanted to create a game based on the Quatermain novels?

The story and ideas within it ARE cliché, but it’s easy to understand why. I’m not sure that makes it any better, and I feel it probably would have been less of a problem if there had been a little more personality there (although it’d also help if we were all a little better read in 19th century literature, not something the developers can bank on).

You don’t have to know the base stories to enjoy Deadfall Adventures, but it’ll definitely help you to see, and even enjoy, the cliché on show.

This isn’t an easy game to critique. It manages to be original and a copy; repetitive and generic, but fresh and different. Perhaps the only thing that can be said with any certainty is that, most of the time, the voice acting sucks, and you’ll only come to like the characters because the archetypes are like old friends, friends who visit a little too often and eat all your food.

Should you buy it? Do you like the sound of an first-person action adventure with supernatural elements, a slow start and decent graphics? Then you should almost certainly get it, even if you wait until it’s on sale. If you have high standards or are otherwise put off by the shoddiness of certain aspects, Deadfall Adventures will do nothing to convince you your purchase was necessary.