Lego Lord of the Rings Review

Lego Lord of the Rings

Lego Lord of the Rings – Introduction

I’m sure there was a lot of scoffing when they announced the original LEGO Star Wars. Taking a toy license that was based off of a movie license and digitizing it must have seemed like the worst idea in the world, spawning a shoddy mess for children who have no idea what a good game is. Funnily enough, the exact opposite occurred and a gaming phenomenon was born. Now there have been approximately a billion LEGO games since then, all as fun and addictive as the last, and LEGO Lord of the Rings is the latest game in Traveller’s Tales quite literal blockbuster series.

One Ring to Rule Them All

Most people know the story of Lord of the Rings, so you probably know that you’ll be playing multiple characters as they guide Frodo towards Mount Doom to destroy the One Ring and defeat the evil Sauron for good. If you haven’t read the books or seen the films, I can’t imagine this would be a game that interests you. If you have and you love the idea of adventuring through Middle-Earth from Hobbiton to the aforementioned Mount Doom, this might be a title for you. 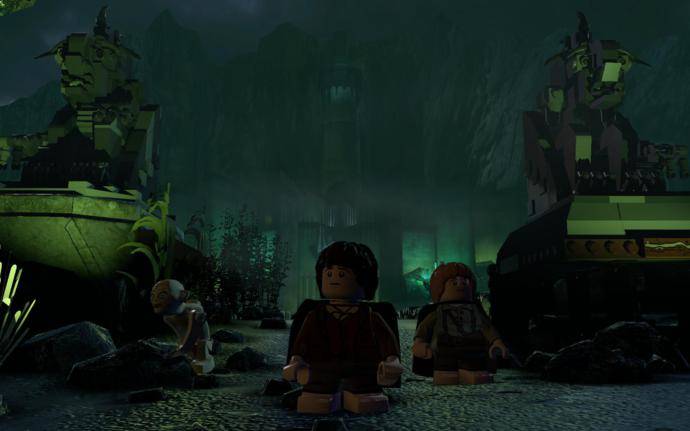 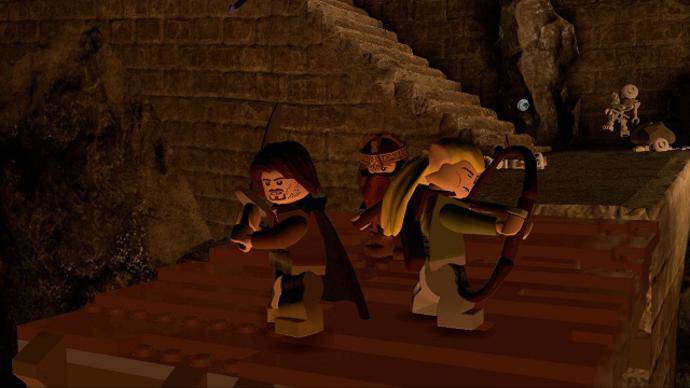 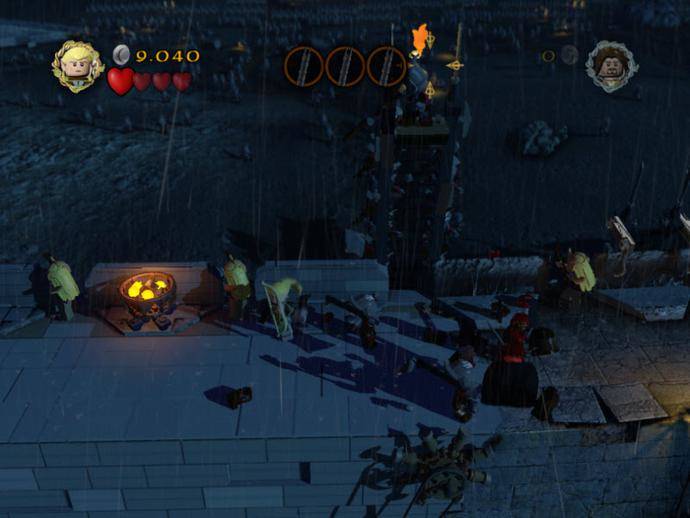 Following on from LEGO Batman 2, the game is fully voice acted. Gone are the muted and mimed cutscenes, added are actual vocal excerpts from the films. So when Gandalf speaks, that’s Gandalf speaking from the films. Any additional voice acting is performed by industry professionals, not the original cast. It’s a shame that this somewhat takes away from the silly “acting” of previous titles. Seeing characters like Obi-Wan Kenobi pulling out items to convey what was happening was a funny way to see the story told, but because it’s voice acted, the humour from the cutscenes is drained away.

There’s a lot of fun to be had, and it’s really on par with the rest of the games in the series, the amount of glitches you’ll come across does a lot to harm the experience.

Not to say the humour is completely gone – it’s still found in the levels and around the world. When I say “world”, I mean it; Middle-Earth is brought to life as a huge over-world map that you can explore between levels. It’s entirely possible to walk from Hobbiton to Isengard to Helm’s Deep outside of the levels, albeit in a slightly linear fashion, but it can be done. The world is jam packed with little Easter eggs and references, and that’s just the ones I recognise.

A true fan of J. R. R. Tolkien’s work will probably find strange amounts of glee from the presence of Tom Bombadil, something a passing fan would never understand. That’s something that Traveller’s Tales do well in all of their LEGO games; they get deep inside the fandom and truly understand what a fan would want.

Fans of the films will particularly enjoy the soundtrack of the game, as it is the same one from the movies. Howard Shore’s soundtrack was an integral part of the films, so it makes sense that it’s included here. The music helps create the feeling of a grand adventure; a mundane walk through a field is now an epic quest, the drum beat matching your footsteps as you march forth into the unknown, eyes set on the horizon, wondering if today is your last. I mean really, it IS just a mundane walk through a field, but the music makes it feel otherwise.

It looks as good as it sounds too. Not everything is made out of LEGO, so some of the landscapes can be better crafted. Rolling hills, babbling brooks, sheer cliffs and murky swamps, all are well realised and feel distinctly like their own locations, and like an actual world. More than that, like the actual Middle-Earth. Fans of Harry Potter loved exploring the nooks and crannies of Hogwarts, and now fans of Middle-Earth will be able to have exactly the same feeling.

They’ll also love the large cast of characters. LEGO games always let you play as whoever you want; want to play as Frodo or Sam? Go ahead. Or maybe you’re more a Gandalf type of guy? Do that too. Want to be the bad guy? Well play an orc, or Saruman or even Sauron himself.

Each character also has an inventory of items to use in levels. There’s a scroll wheel for each character, with most having at least a weapon and some sort of puzzle appropriate item. For example, Pippin has a bucket, used to put out fires. Sam has a tinderbox which starts the fires in the first place.

There and Back Again

Like all LEGO games, levels need to be revisited if you want to complete them 100%, so you’ll have to return to them as you gradually unlock the items throughout the story. If you collect enough of the hidden mithril bricks, you can build these items for anyone to use in any level, which is a huge change from previous games, as theoretically, you could complete levels with just one character. It’s a feature of convenience, and one that’s very welcome.

A true fan of J. R. R. Tolkien's work will probably find strange amounts of glee from the presence of Tom Bombadil

That’s if you’re willing to scour the game for these collectibles, but that’s what the LEGO games are about. After a while, however, it becomes tedious. Most levels end up being played three or four times as you try and find every single thing, and the fun in that can’t be sustained. There comes a point where you’re doing it out of compulsion rather than fun; your innate kleptomania crying out to complete it. It would be bearable if it weren’t for…

Glitches! They’re ever present throughout the LEGO series, but after having played them all, it seems to have reached a peak here. I have completed almost every single LEGO game to 100%, but this game gave me the most trouble. You’d get to the end of a level only to have it glitch on you, making you restart. You finally find that mithril brick, but then the game crashes and you have to find it again. Sometimes, these collectibles will just disappear and you have to restart the game to see them again. The further through the game I got, the more glitches I found; it’s almost like they didn’t want me to finish their game. Having invested 27 hours into this, I would say that at least two of those hours were due to glitches.

It brings the whole game down. It’s hard to recommend a game when so many of its players are having a hard time. There are roughly 1.5 million google results on the subject, with some people unable to unlock the simplest of achievements because of it. It’s a shame since it is a good game. Really, I would feel bad giving this to a child as their innocent minds shouldn’t be exposed to glitch riddled messes.

Lego Lord of the Rings is a decent game, but one that you probably shouldn’t pay full price for. Although there’s a lot of fun to be had, and it’s really on par with the rest of the games in the series, the amount of glitches you’ll come across does a lot to harm the experience. If you enjoy the franchise, you’ll probably get more out of it, but that won’t stop non-fans from loving their journey through Middle-Earth.