Lost Planet 3 is quite different from its predecessors. Opting to take a more Western approach to the series, Capcom turned to the American developers over at Spark Unlimited in an attempt to make this third installment more appealing. The franchise doesn’t have a great track record, receiving low marks from both critics and gamers, so it’s no surprise this game hasn’t been getting much attention. It’s a shame, really, since it has some pretty good stuff to offer.

The Hazard Pay Better Be Worth It

Taking place prior to the first two installments, players once again find themselves on a planet known as E.D.N. III, this time during an ice age. The protagonist is Jim Peyton, an Average Joe that signed up to work in this deadly environment in order to provide for his wife and son. Much of the story involves his relationships with a crew comprised of researchers, scientists, and fellow grease monkeys as they mine for a new power source to be used back on Earth – T-Energy.

The writing is where LP3 really shines. It has a blue-collar, sci-fi vibe akin to Firefly and Alien (including a soundtrack reminiscent of both), which makes the story and characters easier to identify with. This is only heightened by Peyton’s video conversations with his wife, where they tell each other stories about their lives, showing that the vast distance between them is taking an emotional toll.

Grounded, human-centric narratives make for some of the best science-fiction, and here Spark Unlimited absolutely nails it

This isn’t just a character-study, either. Peyton makes friends and enemies out of his co-workers, and there’s plenty of conflict and mysterious happenings on E.D.N. III that pushes the plot forward. There’s practically nothing that feels rushed, and most of the major plot points are executed perfectly. Grounded, human-centric narratives make for some of the best science-fiction, and here Spark Unlimited absolutely nails it.

The linear design that’s common to the series is present to an extent, but it comes in the form of a pseudo-open world environment. Various areas of E.D.N. III can be revisited, and the home base of operations, which contains a barracks, quartermaster and docking bay, among other things, can be fully traversed between jobs.

The contracts Peyton takes on consist of finding lost crew members, locating T-Energy deposits, and fixing communication relay systems, all while staving off Akrid attacks. The missions become more involved as the story goes on, but the whole “I’m just here to work” approach is compelling, especially with all the sticky situations Peyton gets into as he treks around the closed-in, frozen landscape.

Like the other Lost Planet games, Peyton has access to a mech, typically referred to as a Rig. Technically, it’s not made for combat, and it’s really only made for doing repairs and travel, but its claw and drill arms can be used to beat up on the bug and plant-like indigenous lifeforms known as the Akrid. The Rig can be fairly awkward in combat, but it gets the job done, and can also be upgraded with salvage found while out on runs. 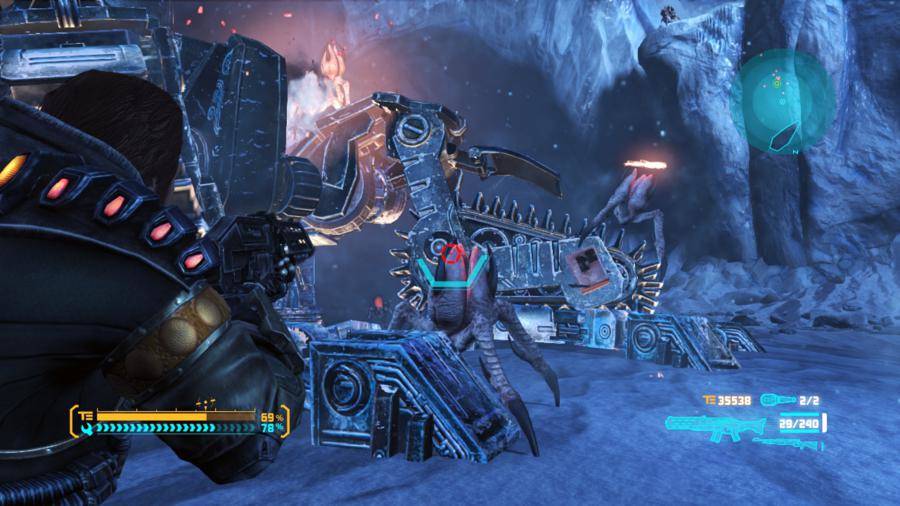 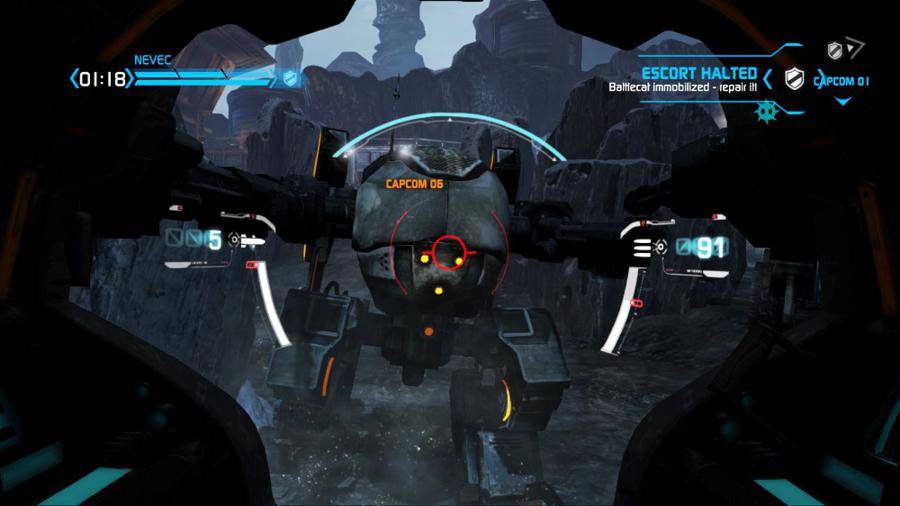 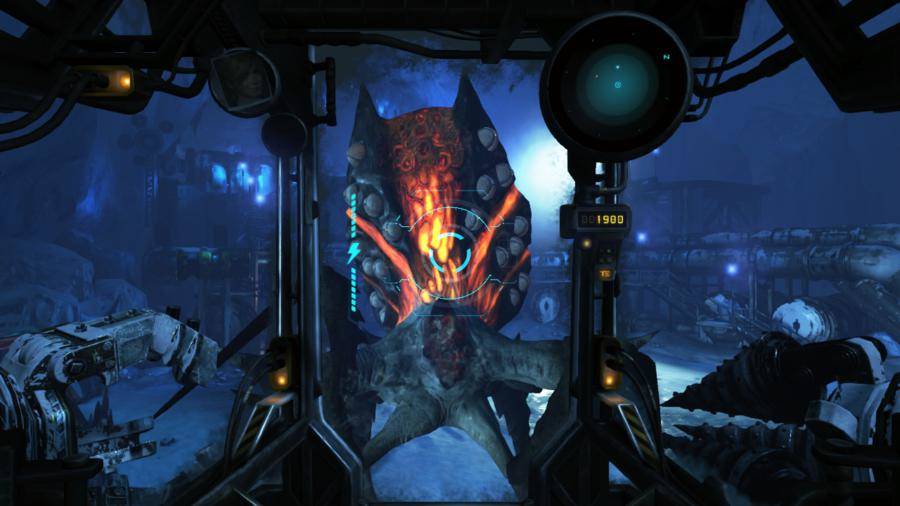 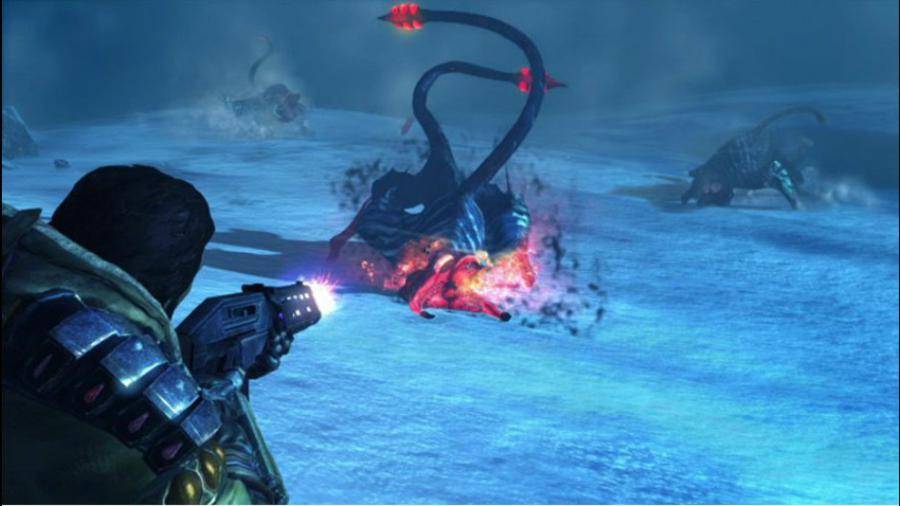 Using the Rig during the outdoor segments is one of the best aspects of LP3. The majority of the time is spent plugging away at Akrid with firearms, but the Rig must be used to go from point A to B, and to also fix structures around the colony by turning huge levers with its claw, knocking away ice with the drill, or pulling something down with the winch. This mixes things up in a positive way, and keeps the game from getting stale.

Fighting hordes of Akrid fits the setting and plot, but at times the gameplay is bogged down in repetition. Many of the areas require Peyton to find an exit, only to realize that (of course) the door is locked, and he has to find a computer console to open it. Fortunately there really isn’t any lengthy backtracking when this occurs, but it happens so often it becomes laughable.

Tracking down security overrides has nothing on the game’s kill-rooms, though. Some of them turn into arcadey shooting galleries, with waves of enemies getting burped out by tentacle-mouth creatures attached to the walls, only stopping after they’ve been destroyed. The only thing that saves these instances from being too taxing is the (mostly) responsive gun mechanics, though some of the weapons can be a little janky.

The gameplay works best in the frozen tunnels and ominous hallways, or when Peyton is climbing icy cliffs or exploring facilities, grappling and zip-lining his way to new areas. Here, the combat is more intense, more snap decisions are required, and the encounters typically don’t last that long.

The same can’t be said for the boss battles, however. A lot of them drag on, and are mostly predictable. A typical scenario involves dodging a charge attack (usually signified by the beast’s obnoxious wailing), then turning around to shoot at its all too obvious, glowing red weak-points.

This isn’t to say every showdown with one of these behemoth aliens is tedious. Indeed, some of them are quite epic, like one early on that has Peyton running around catwalks, dodging swipes from the gigantic Akrid’s claws as he peppers the bugger with bullets, then finally makes it back to his Rig so he can apply the finishing blows.

As up-and-down as the gameplay is, it’s never boring, and there are plenty of moments to regroup by interacting with some of the characters back at base and helping them out with sidequests. These optional objectives are the fetch or bag-and-tag “X” amount of monster variety, but they add more immersion and are a nice break from the primary missions.

Those that miss the co-op features from Lost Planet 2 can find them in LP3’s multiplayer, but prepare to be disappointed because the online offerings aren’t very engaging. The mode called Akrid Survival is probably the best option for team-based play, as it offers an interesting combination of horde-shooting and king-of-the-hill. Even then, it gets just as old as the other choices, which consist mostly of generic, cover-based shooting.

The storytelling is really the driving force behind LP3, which is one of the strongest narratives found in a game this year. This reason alone makes the game worth playing, and the developers deserve a lot of credit for this. There are problems here, and a little more polish would definitely have helped, but I have a feeling many will look back and realize they missed out on a truly underrated game.