These days, it seems like everyone is trying to breathe new life into the zombie genre. Most developers are looking for the angle that nobody has done before, trying to make zombies terrifying all over again and forcing people to sneak around in the darkness lest they find their tender brains being chewed. What happened to all the fun we used to have with zombies, where we were the ones with all the power and they were just rotten targets, ripe for the shooting?

Splatter brings it all back.

Splatter is a top down shooter reminiscent of something like Smash TV. You walk around the world with WASD and do your aiming and shooting with the mouse. Piles of zombies throw themselves at you, and you backpedal while mowing down with you pistol, shotgun, or whatever other weapons you happen to find laying around the environment. As is typical of this type of game, the pistol has unlimited ammo, so you always have a nice little firearm to fall back on if your better weapons run out of bullets.

As you walk around the world executing the walking corpses of your former friends and neighbors, you’ll occasionally get a little story creeping in. The lightly animated black and white cutscenes are similar to a motion comic and have a very overblown noir style that I found myself enjoying. It’s the sort of over-the-top self-aware commentary that I felt was in on the “joke” rather than just being ridiculous. For some people, it’s likely to be too over the top and ridiculous to be enjoyable.

If you're looking for a few hours of pure zombie blasting fun, look no further than Splatter

Splatter has a neat little upgrade system that adds an element of advancement for people who love powering up their weapons. As you search the environment and defeat enemies you’ll collect cash that can be used to upgrade your weapons at specified upgrade points. You’ll add things like more damage, laser sights for increased accuracy and more. Increased killing power means more dead zeds, which is good for everyone. Except zombies, I suppose.

It also adds some interesting elements to the Zombie myth, like the fact that the undead are scared away from the flares that you’ll find in the environment. When you get mobbed by a huge group, you can toss a flare to keep the majority of them off of you while you keep plugging away and thin their ranks. Or try to scare them towards vehicles littered around the environment, which explode with very little provocation and are great for turning ghouls into flaming meat chunks.

The game also changes things up from time to time with interesting little segments, like giving you the choice of shooting a guy who just happens to walk into a room where you are waiting. I chose not to, and he ended up becoming an AI partner who helped me out for a while. Later on, I jumped into the back of a pickup truck that inexplicably had a minigun installed and was tasked with clearing a path and defending other humans as I was driven through the town. There’s a surprising amount of ways they switch things up and keep you engaged, despite the fact that you are  mostly just shooting at zombies for most of the time.

The graphics in Splatter are incredibly simplistic for the most part. The top down view doesn’t require a ton of graphical power to get the point across, but the character modes look good and the backgrounds are quite distinct. One fantastic touch is that almost everything gets destroyed and turns into chunks when shot. You can walk into a room full of chairs, desks, appliances and more, and when you are done fighting the zombies within the room will be covered in corpses along with all the pieces of destroyed decorations. I’d frequently walk into a room that held no zombies and stop just to destroy all of the counters and desks inside anyway, because why not? 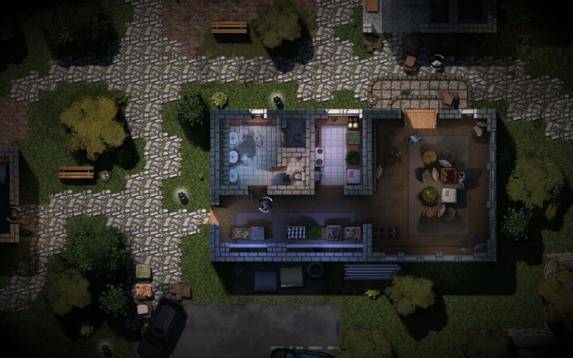 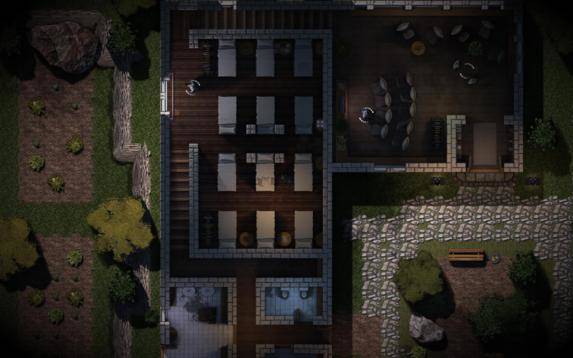 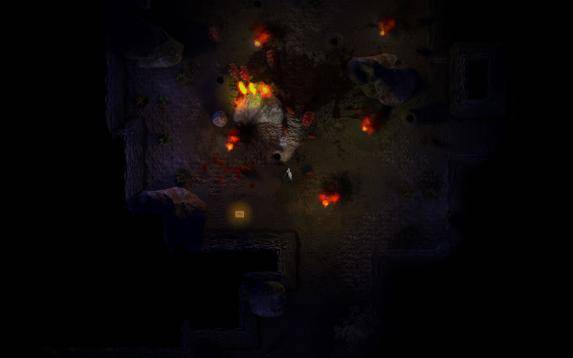 The graphics may be simplistic, but the lighting is excellent. Your guns have flashlights attached and the effect of slowly shining your light into a dark room and trying to discern what is there can be nerve-wracking. The interiors of buildings are hidden from view until you properly enter, so the act of exploring can have you on edge even though you are a powerful force of vengeance against the brain-seeking masses. All in all, the graphics leave a better impression after playing for a short while than you would expect from seeing screen shots.

While not the most important part of things, the audio works quite well in conjunction with the actions happening on the screen. Gunfire sounds nice and heavy (something I am a stickler about and am often disappointed with in many games) and the various noises that the undead monsters make fit the setting. There isn’t really any voice acting to speak of, just grunts when characters are speaking and some text to read. (As an aside, I’d be happy to do some hard-boiled noir voice work for the main character if the developers are interested!)

The sound effects set the scene nicely and stay out of the way when you want to concentrate on what you are seeing, so they fit with the style of the game.

Splatter – Just Harder Times is a surprising little zombie game. Upon loading it up and taking my first look, I expected very little. This is truly one of those times where judging a book by its cover would be doing the full product a disservice. In a world overrun by zombies, there’s only one person with the dark noir attitude and unlimited pistol ammo to get the job done, and that’s you. Heed the call, and you’ll find a great game of zombie murder to pass the last few weeks of summer drought. If you’re looking for a few hours of pure zombie blasting fun, look no further than Splatter.