Monaco What’s Yours Is Mine Review

Monaco What’s Yours Is Mine

Monaco What’s Yours Is Mine Review – Introduction

Three things in this world are certain: death, taxes, and stealth missions in video games. Some games include stealth missions for variety or back-of-box feature lists, and others include them as an alternative to smash-and-grab gameplay. Few games really focus on covert gameplay as a primary mechanic, and that’s probably because making good stealth games are hard. Monaco: What’s Yours Is Mine from Pocketwatch Games proves that stealth doesn’t have to be a trudging experience for players.

Monaco plays from a top-down perspective with a unique visual style that blends pixel art, classic blueprints, and a hint of neon. You control a motley crew of con artists, grifters, and even a few psychopaths who are trying to escape from the titular French city-state. That setup exists solely as an excuse to put this reluctant team into venues for theft and mayhem, and there’s little in the way of story and characterization to get you emotionally invested. Your primary objective is to navigate through buildings, escape detection by guards, and steal as much as possible. Being spotted doesn’t mean instant failure, but it’s wise to avoid it at all costs, as guards will stalk you and shoot to kill. 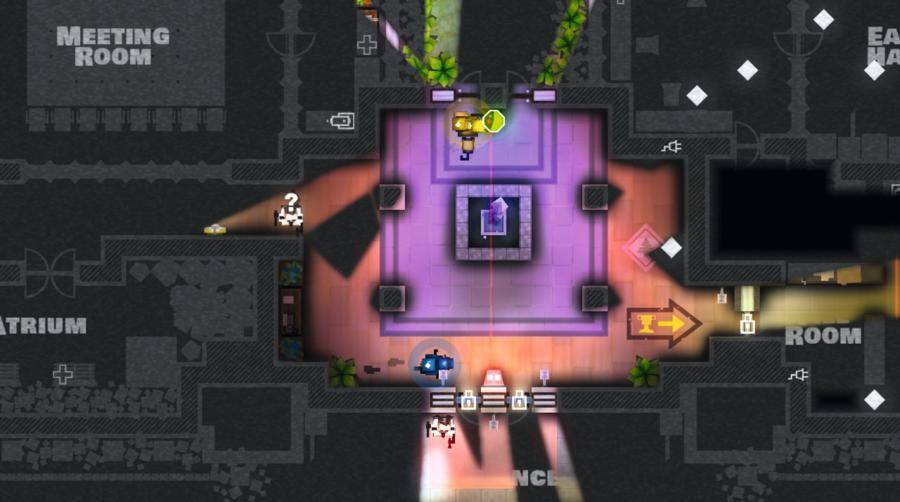 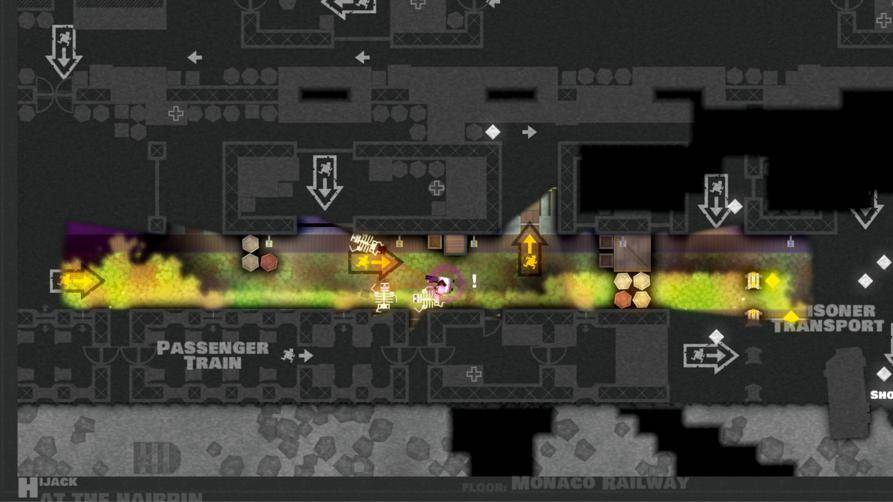 Stealth isn’t exactly required in Monaco, but it’s strongly encouraged. Most levels revolve around stealing precious items or destroying evidence, activities which ideally occur in secret. Guards and civilians are curious and will follow you relentlessly. There are a handful of tools to aid in your heists, but evading death in Monaco mostly involves hiding anywhere you can — under bushes, around corners, and in bathroom stalls to name a few.

Each of the eight playable characters in Monaco have their own special abilities to help them rob the French Riviera blind. Some are straightforward — the Locksmith, for instance, is faster at opening locked doors and safes — while others are more esoteric — the Redhead can charm alert guards into a more docile state. All of these abilities are useful, but it’s a bummer that you have to choose from one at a time. Because you can only switch characters when you die, it’s common to approach an obstacle that’s too difficult for your current choice and then go kamikaze just for the opportunity to pick a better option.

Death Isn’t All It’s Cracked Up to Be

This character switching broaches one of the larger problems of Monaco: its difficulty level. In the single-player campaign, you have as many chances to beat a stage as you have characters. As the levels progress, you’ll add new members to your crew, leading to more and more chances. This reverse difficulty curve means that the later levels are actually less of a challenge in some ways than the earlier ones, and it’s easy to resort to brute force instead of strategy to progress. The lack of incentive to engage with secondary objectives also discourages the use of strategy.

Think about your favorite heist movie. The characters spend hours, days, maybe weeks coming up with the perfect plan that takes skill, finesse, and perfect timing. Now imagine if Danny Ocean and his crew barged into the front doors of the Bellagio without a plan, bumbling their way to the vault. Not as exciting, is it? In Monaco, you can take the time to orchestrate the perfect game plan, but there’s no reward for it except for your own satisfaction. If that’s enough for you, the game’s heists might be fun for you, but if you’re anything like me, it’s just not enough.

Getting the Band Back Together

The unsatisfying strong arm approach may work in single-player, but not so in Monaco’s multiplayer mode, which is where the game really shines. Instead of letting you cycle through many lives with different members of your crew, two to four players each pick one crew member and get one life. Even though you have more eyes and abilities at your disposal, you also have more chances to be caught. For this reason, planning and communication become quite vital, and the tension of wondering if your teammates can pull off their part of the heist is palpable and satisfying. Monaco many be one of the most purely cooperative games ever created, much more so than run-and-gun titles where every player has the same abilities, roles, and objectives.

Because most of the fun in Monaco comes with playing with others, it’s unfortunate that the online community seems to be waning. I often had trouble finding games with more than one other person, and four players is ideal. The inclusion of couch co-op lessens this blow, but it’s not always convenient to get four players together in real life.

For a game with a simple and straightforward goal, Monaco delivers completely unique gameplay. It proves that properly executed stealth can be elegant and there are still new cooperative experiences to be had. Despite its shallow solo campaign, there are plenty of tense heists in Monaco to pull off with friends on your couch or strangers online. Just don’t get caught.