The creation of any video game requires a great amount of time, work, and skill to pull off, even with a vast team of developers with various skills.  Due to the complexity of the medium, it is unheard of for a single person to create and develop a high quality game all alone, until now.  Dean Dodrill, the creator of “Dust”, programmed and designed every aspect of the game outside of the voice acting, music, and part of the script.  While this is extremely impressive by all means, Dodrill makes some rookie design choices that slightly mar the overall experience.

From the Ashes, A Warrior is Born

After waking up from a deep slumber, an amnesiac, Dust, finds himself in the middle of an unknown forest.  It is here that Dust meets the Blade of Ahrah, a mystical talking sword, and its guardian, Fidget.  With Ahrah in hand, Dust sets out to find out who he is and discover his true destiny.

The story of “Dust” isn’t anything new to the fantasy genre and the characters tend to be either likeable or not with no middle ground in between.  Dust is likeable because he is flawed and just trying to find his place in life, while Fidget is on the other end of the spectrum because she constantly whines in a high-pitched voice.  The problem with the characters is so many of them act cartoony even though the plot is serious and very dark.

While “Dust” does sport an art style much like a Disney Channel cartoon, the plot is far from family friendly.  War and genocide are common themes found in the world of “Dust” which is strange considering all of the characters are animal-like people.

The Long Journey Ahead

The term “Metroidvania” has been used to describe games resembling the adventure style of Metroid and/or Castlevania: Symphony of the Night; “Dust” falls into this category.  Right off the bat, players are thrown into maps filled with secret treasures, some of which cannot be accessed until gaining a specific ability.  Exploring the game’s levels is fun in its own right and usually grants a decent reward for thorough adventurers.

When Dust isn’t scouring the lands for hidden items, he’ll be locked in combat with various enemy types.  Combat in “Dust” plays much like God of War in a two-dimensional plane; the two attacks buttons can be used for specific combos, area-of-effect magic can be utilized, extra experience gained by racking up a high hit count, and it even has a similar dodge move. 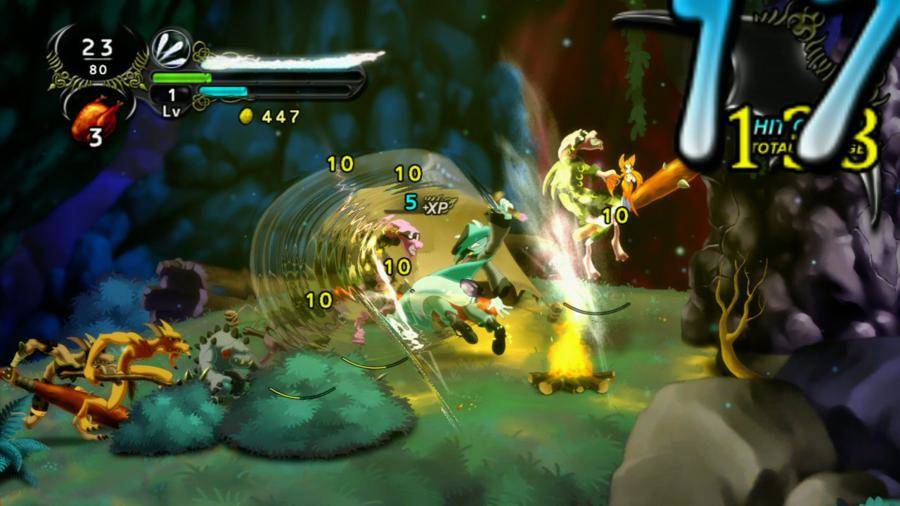 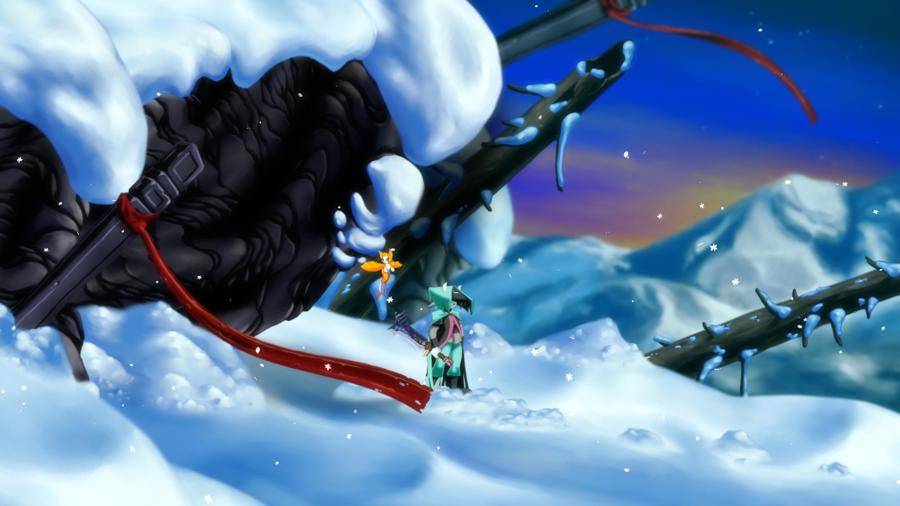 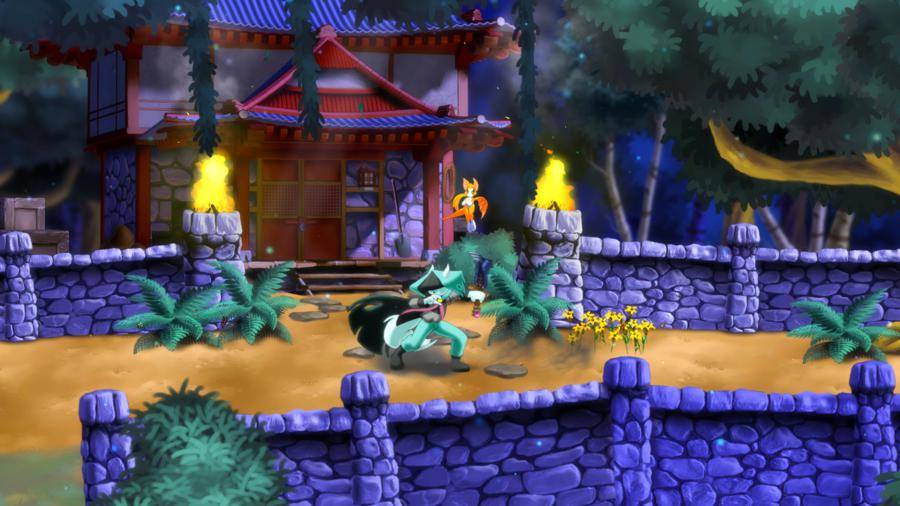 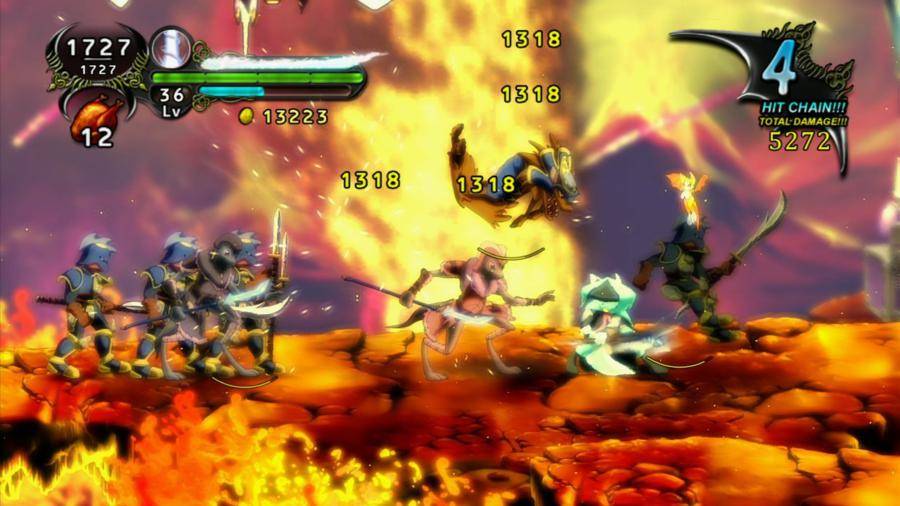 The combat system is fun and flexible yet mildly pointless due to the lack of enemy types.  Most of the monsters are weak and tend to fight in large numbers, but even then they hardly put up a fight against Dust’s speed and finesse.  There are also special enemies which can be either weak, annoying, or legitimately challenging. Some of these enemies take advantage of the playing style built throughout your adventure in a way that doesn’t always seem fair.

Fidget, Dust’s support character, can use different magic attacks which in turn can be spread across the area through Dust’s special attack.  Unfortunately, this is only good for racking up large combos as Fidget’s magic doesn’t put a dent in most enemies until the final stage.  There is also one enemy in the game which can only be destroyed by Fidget’s magic and unless the player upgraded Fidget’s stats to an adequate level, they will be trapped in the area for a while.

Unlike normal “Metroidvania” games, Dust is unable to leave an area if an enemy is present on the screen.  This can be annoying when trying to reach an objective quickly and said enemy spawns others, constantly making the problem worse.

Gaining enough experience grants Dust a gem to use to enhance a specific attribute but does not completely replenish his health like in most RPGs; neither does entering a save point. These features are commonplace among this genre, so I was a little surprised to see their absence in this game. However, this isn’t a big deal and even on the normal difficulty, save points will give back 50% of Dust’s health if he is near death.

Danger Lies Around Every Corner

The level design closely follows the pattern of most platform or adventure games such as Zelda or Sonic.  Dust starts off in a forest before going to a large cavern, multiple villages, a cemetery, icy mountain, and an erupting volcano.  Levels are a joy to look at and are mostly fun to traverse, but there are a few bumps along the way.

The game’s levels have more spike traps than a Sonic game and quickly become a hassle to players.  They don’t do enough damage to be much of a threat, but they are very annoying and are overused to the point of creative tedium.

At the end of every story area, Dust is forced to battle with one of the game’s four bosses.  The design on these enemies is about fifty-fifty; two bosses are fun and challenging and the other two are poorly designed.  One boss in particular can be defeated by spamming a simple combo repeatedly because this particular move keeps the boss from moving or attacking.

Outside of story missions and exploration, Dust can provide assistance to people he meets in the world.  Merely activating a side-quest gives Dust a large amount of experience and completing those quests grants items.  There are also hidden arenas in which Dust must fight and traverse through a dangerous obstacle course.

Trials are difficult and score the player based on time, combat, and number of score lanterns collected.  Scores are ranked from one to four stars with a better item offered for more stars.  Luckily trials are optional because they are very challenging and dying here throws players back to their last save.

A World of Light, and of Dark

Graphically, the game is beautiful and well animated; Dodrill created the art direction by hand to give the game its cartoony visuals.  The only problem with the art direction is the lighting effects found during levels with rain and snowstorms. Both of these effects are eyesores because of the bright lighting emitted from the screen.  Other than this, the visuals are flawless.

Sound design is mostly good; Dust’s voice echoes inside of caves, the musical score is rousing, and the majority of the voice acting, regardless of inconsistent writing, is top-notch.  Some voices come off as a little too cartoony and overacted; Fidget’s voice in particular is shrill and annoying.

Dust: An Elysian Tail is an impressive game considering it was created by a single person, and is fun to play despite some poor design choices.  The combat is flexible, adventuring is a joy, and the game’s presentation is almost perfect.  Had the enemy design been more consistent and the story and voice acting been better polished, this diamond would have been flawless.

Dust may not be perfect, but it is truly a feat to behold and should not be missed, especially considering its price tag.