Rise of the Triad Review

Rise of the Triad

Rise of the Triad Review – Introduction

Rise of the Triad is one of those success stories that just don’t happen enough in the gaming industry. Essentially a fan game, it was created by people who loved the original Rise of the Triad (released in 1994), people from across the world who worked from their homes, put money in just for the love of the project.

Some were game developers, other just wanted to join in – all of them should be immensely proud. Rise of the Triad gets what made those early FPS games so special, and it does it in a way that doesn’t feel cheesy or overly nostalgic.

It’s not perfect, but considering its back story, it’s much better than it should be.

Rise of the Triad is a typical oldie shooter. The story doesn’t much matter (although it’s presented exquisitely well in comic book form), you’ll get a rocket launcher in the first five minutes and, if you’re used to taking damage and then ducking behind cover, you’ll probably die an awful lot. 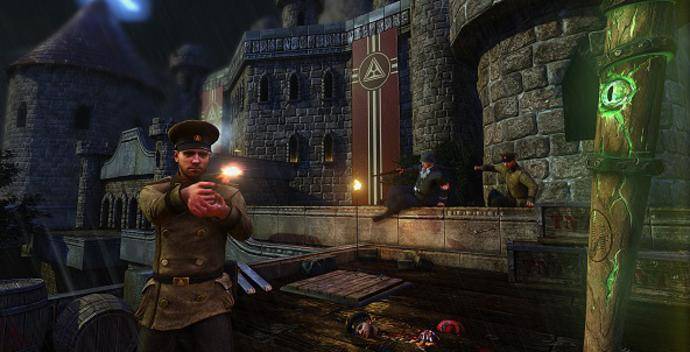 For the most part you’ll need to simply travel from A to B, shooting everything in your way and searching for secret chambers and hidden rooms. The hidden stuff is entirely optional, as is going from A to B really. If you want to stand in one place and shoot a bunch of stuff, there will be areas where that is possible.

AI is a mixed bag. Sometimes they’ll dodge, cleverly weaving through your bullets, seemingly knowing your every move before you make it. Other times they’ll stand as you shoot them in the face repeatedly. Either way, it ends the same – they get shot in the face a lot.

Sometimes they’ll drop to their knees and beg for their life. This is an interesting feature and one that I wish would appear in more games. The problem is, it doesn’t really lead to anything. Either they’ll disappear or they’ll get back up, using your weakness (should have shot them in the head…) against you.

This is all just flavouring, salt to add to the taste of what is, effectively, a march across a series of rooms or passageways.

To increase replayability, and to add to the fun, there are a number of characters, each with strengths and weaknesses. Some are faster, others have more health. It’s slight variations on the same idea. For die hard fans who just have to see everything Rise of the Triad, the differences will give birth to nuanced play and increased value. Most people probably wouldn’t see the slight changes if you lined them up next to one another.

Enemies have good reason to beg for their lives, as the ways in which you’ll kill them are both painful and potentially humiliating. Sure, you can shoot them in the face, but hit them in the right way with a powerful enough weapon, and their arms and legs will come off instead. This is one of the only things that Painkiller got right, and I’m glad to see Rise of the Triad has it as well.

It's not perfect, but considering its back story, it's much better than it should be.

In fact, visually Rise of the Triad is above decent across the board. Built in the Unreal Engine, they’ve managed to make a world that’s both dark and colourful, traditional but not overly maze-like. I’m not sure how similar the levels are to the maps in the original, but either way they’re fantastic to play.

Aside from some very masculine hands whilst playing female characters (it’s the nail varnish that really adds a new level of strange), there’s not very much to complain about in terms of how the game looks. Instead, mention must be made of how under-optimized it is.

Rise of the Triad’s most graphics-intense settings will bust your computer pretty much no matter what. That’s not an issue, it’s always nice to have a specific mode for those that spend thousands on equipment each year. The problem is that things don’t scale well, and you’ll end up with occasionally jaggy, jumpy graphics and a low framerate regardless of your experience with better looking titles.

This becomes especially frustrating when you play online.

What’s your favourite kind of online shooter? Take that experience, give everybody rocket launchers and one goal: shoot everything that moves. Make it so that everybody can jump around stupidly fast, take away any sort of spawn logic and let people turn into dogs…

That’s Rise of the Triad. It’s absolute mayhem. It should be fantastic and on many levels it is, but there are problems as well. Lag is terrible, even before general release there seemed to be problems. It seems to have actually improved as more people have logged in, although there are still moments where everybody’s framerate will drop and nothing will work as it should.

Hopefully, by the time you’re reading this, it will have been fixed. It’s still playable, but it just adds to the mayhem and to the general feel that there’s no really much skill to it.

Which just isn’t true. The opposite should be said in fact. Rise of the Triad requires you to have such a specific set of skills if you want to do well at the multiplayer that you really begin to appreciate the more class-based modern shooter. If you suck at rushing to powerful weapons, aiming quickly and accurately and letting rip with a barrage of rocket fire, you’re going to find yourself at the bottom of the boards each time, regardless of your sniper practise or healing prowess.

As the developers polish and perfect Rise of the Triad, you'll be left with a game that perfectly captures an era of gaming without actually needing to feel of that era.

It’s quite disappointing to find that it’s something you’re bad at.

There are also issues with mouse sensitivity. If you have something that allows you to change your DPI on the fly, you might not suffer too badly, but others will find aiming something of a chore.

A special mention has to be made of a text-to-voice feature that plays over the background of every game. Every message typed is spoken in a perfect robotic voice that makes playing with friends slightly less of a focus while you’re mid-game and which can lead to general hilarity.

Unfortunately the secret is out, and you’ll hear no end of robotic versions of “I like willy. I really like willy.” Copy and paste throughout the entire match.

It’s one target that even I can kill though.

Rise of the Triad Review – Conclusion

I have loved my time with Rise of the Triad, so much in fact that I’m going to keep returning to it. In time, as the developers polish and perfect it (as I know they will), the issues will disappear and you’ll be left with a game that perfectly captures an era of gaming without actually needing to feel of that era.

Perhaps it’s good development, or perhaps Rise of the Triad was more influential and forward thinking than we give it credit for. Maybe it’s both.