Considering that Out of the Park Development’s signature Out of the Park Baseball series is a constant time sink in my life, there’s no denying I was excited to play their foray into hockey simulation, Franchise Hockey Manager. Not because I was a hockey fan – though I’m a sports nut, I rarely watch hockey – but because I was hoping FHM would allow me to learn the ins and outs of the sport, as OOTP did with the deeper complexities (and constant heartbreak) of baseball, both as a game and a business. With a huge array of tools, customizable options, and historical information, FHM certainly does that – but in the most inconvenient ways possible, forever keeping me at arm’s length with its frustrating design and presentation.

FHM: Close, but no cigar (yet)

I can only imagine FHM is penetrable to the most hardcore of hockey fans; from the moment I opened FHM, I felt overwhelmed by the plethora of menus, sub-menus, line-up options, and the like. Admittedly, OOTP is constructed in a similar fashion – but there’s a much more streamlined approach to regular gameplay (translation: reading stats, looking through menus, game simulation) that doesn’t quite translate as cleanly to the hockey side of things. In ways, it’s almost too similar: being a different game with a different style of management, FHM begs for a more distinct user interface, instead of a simplified version of OOTP’s.

A rough game with a lot of intriguing features, it seems FHM is still a year or two away from entering the upper echelon of OOTP and Sports Interactive's Football Manager series

And in execution, FHM just isn’t as engaging as I’d hoped it would be. There’s just not a lot of personality to be found: as a way to organize spreadsheets of stats and information, and provide a passable realistic simulation of games, FHM has the basics down pat. There isn’t a player not to be found, no rock unturned when it comes to tweaking game options and league settings: but without the personality, the life found in OOTP’s news sections and in-game dramatics, FHM is a bit of a flat soda.

That’s not to say there isn’t any fun to be had playing the game; as I stated, hardcore hockey fans looking for a managing fix will be mostly pleased with what they find: building an NHL powerhouse (or other world league; they’re all in FHM for you to explore and dominate) is a thoroughly rewarding experience, a culmination of luck, tactical mastery, and smart management. Just don’t jump into the in-game simulation: the game’s rudimentary, unattractive match engine is far and away the most frustrating aspect of FHM in its current form. Eventually, I’m sure it will be fixed – OOTP Developments is known for their constant updates, and desire to listen and respond to player feedback – but in it’s current state, is an entirely hands-off experience, void of any visual imagery to aid players in any kind of tactical management. 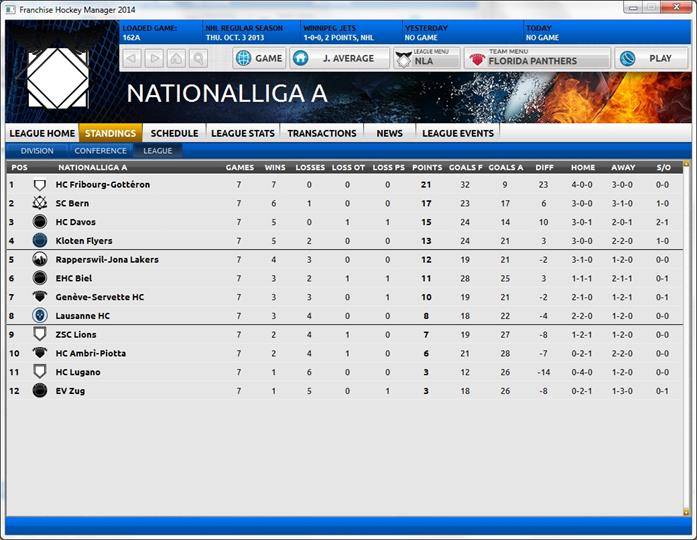 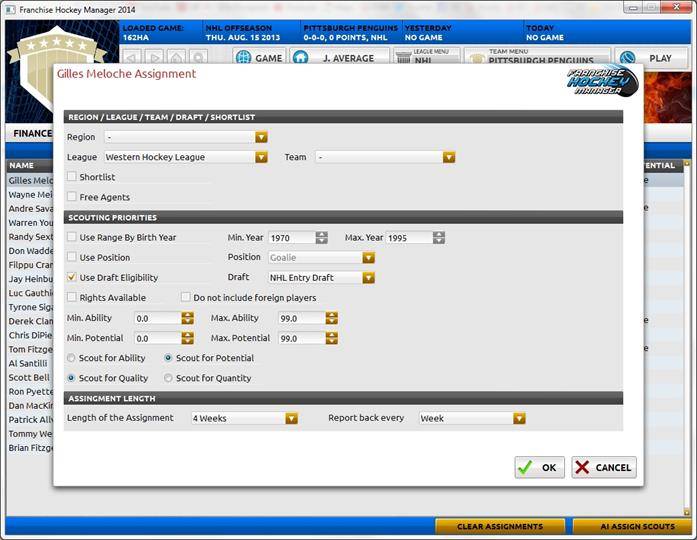 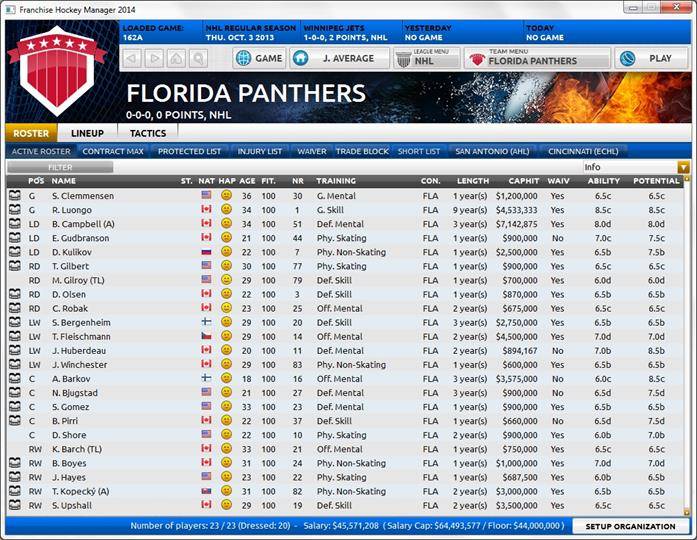 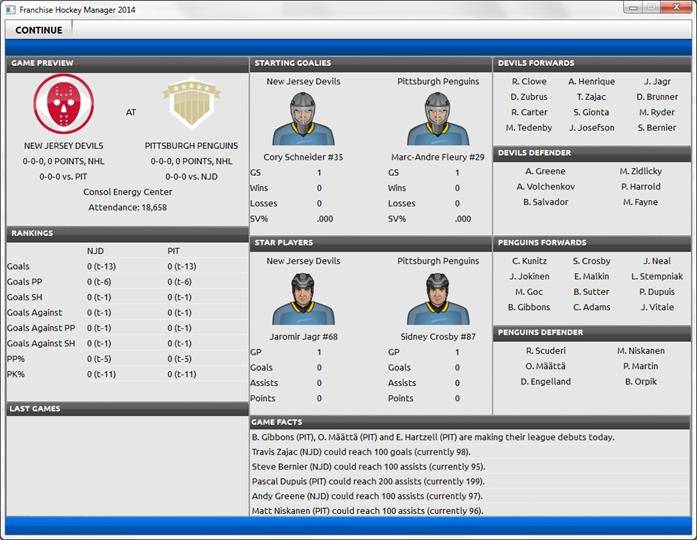 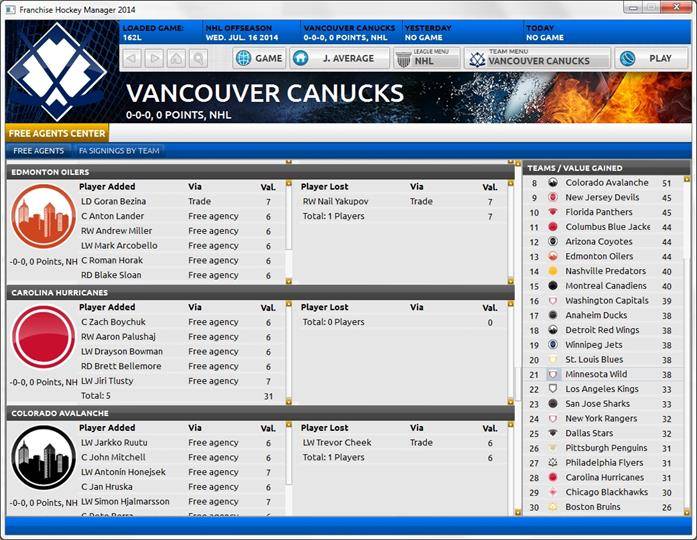 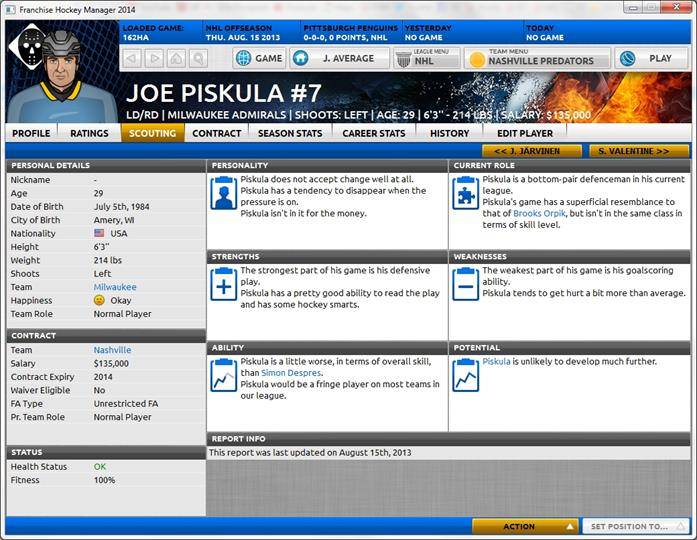 FHM is a mixed experience: for every exciting moment drafting a huge prospect or making a massive comeback during a playoff game, FHM’s impermeable game design and lack of engaging aesthetics make it a hard recommendation for anyone except the throwback-sweater owning diehard hockey fan. A rough game with a lot of intriguing features, it seems FHM is still a year or two away from entering the upper echelon of OOTP and Sports Interactive’s Football Manager series.