I love when great games are born from mods. Take Day Z for example, originally a mod for Arma II and is now getting its own standalone title because of its popularity. Cry of Fear is a mod of Half Life 1 but, unlike Day Z, it has its own complete style. What I mean by that is Team Psykskallar, the developers of the game, only used the Half Life source engine and basic code to make Cry of Fear. Everything else in the game (textures, sounds, models) are all made exclusively by Team Psykskallar making the game a very unique experience. If no one told me, I would have never known this game was a mod of Half Life 1. But enough about all that, let’s get to the good stuff!

A Return to Horror

Cry of Fear reminds me of older horror games. It starts with the protagonist getting hit by a car and waking up in an alley with no idea how he got there. As you look around and try to find your way home, you run into strange and terrifying creatures that try to kill you. It’s important to note that, unlike older horror games such as Silent Hill and Resident Evil, Cry of Fear is a first person game. I felt that this made the game scarier because you experience everything up close and personal. It really freaked me out whenever a monster is waiting right around the corner with a knife or arm/spike/things.

The enemies are mostly humanoid in basic form but have weird, creepy, gross mutations to make them scary. When you first meet a new enemy, it can be very intimidating but the fear factor diminishes over time. Of course right when I’m getting bored of the current enemies, new ones show up with guns. So yes, monstrous, humanoid, creatures with guns. 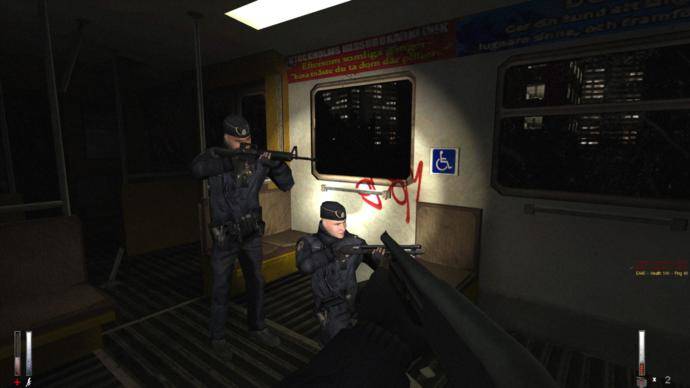 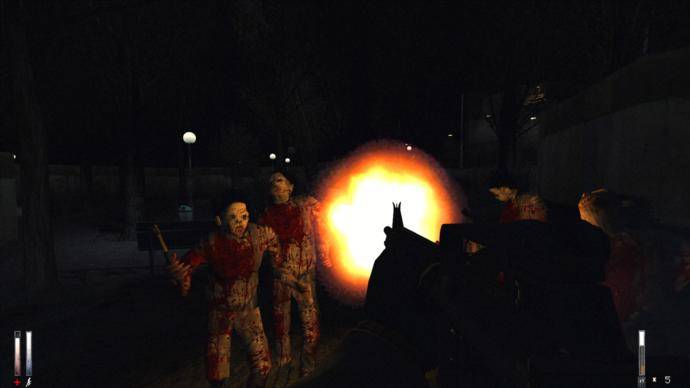 Your own arsenal includes a variety of melee weapons and firearms. You can only hold six items at a time (with one slot already taken for your phone) so picking which weapon to drop to make room for a key (or other important item) becomes a frequent and hard decision. Ammo is also pretty scarce adding to the survival horror feel. It’s also appropriate to mention here that if you reload a gun with bullets left in the chamber, you lose those bullets. Yes. I’ve done this several times. It’s not a good feeling, especially when bullets are hard to find. Just another one of those “little things” that make Cry of Fear so great.

The atmosphere of Cry of Fear is very well done. For horror games to work you need to fill the player with a sense of dread. I find that the unknown is what we fear the most. The eerie ambient sounds, music, and dark visuals add to that fear and being in first person, you can’t simply peek around corners so easily. The enemies’ noises are also eerie and sometimes alarming. The one that shrieks and runs at you makes me waste ammo EVERY TIME. The atmosphere of the game is also affected by the graphics, which are quite dated. While the visuals aren’t current-gen awesome, it’s very easy to look past that given that this is an indie game. I also found that once you start playing the game, you forget about the graphics and they quickly cease to matter. The enemies still look creepy enough to scare you and suddenly that’s all you are thinking about.

Lighting is also an important aspect of both gameplay and atmosphere in Cry of Fear. The flash light system is a very interesting concept. Instead of a flash light you have your cellphone. You can dual wield your phone and a one handed melee weapon or gun, but this will leave you unable to reload. The second option is to turn your phone light on and then pocket the phone. There will still be ambient light around you, though not as bright as holding the phone up. I thought this was such a neat idea. I’ve never seen anything like that in any other game, ever. It even adds to the creepy atmosphere if you are in a really dark place; you can see, but not very far.

Puzzles are also part of Cry of Fear. They can be as simple as “explore the area to find the key to a door” to “here’s a poem; now put each statue in the right spot.” What I really enjoy is that the bosses are a puzzle all on their own. For example, one boss shrugged off any direct damage I tried to inflict. Instead I had to electrocute the water several times to kill him. Seems simple right? Add the fact that he kills you in one hit and the room is VERY small. It adds to the tension, especially when you first encounter him and say, “HOLY CRAP HE’S BIG AND I’M SHOOTING BUT NOTHING IS HAPPENING OMG!”

Cry of Fear has all the right elements for a horror game. Please note that I may not be the best person to go by for how scary a game is (because I get scared easily). Having said that, I still feel that Cry of Fear is a fantastic indie game for fans of old school horror, with the twist of being first person. The game is also of considerable length, especially since it’s free. Oh, did I mention that this game is FREE? Yes, Team Psykskallar created this standalone Half Life mod (meaning you don’t need to buy Half Life to play it) for everyone to enjoy. I encourage you to try out this terror by either downloading it from their website or obtaining it from Steam. You literally have nothing to lose!