How can God be omnipotent and benevolent yet the world be filled with constant war and unending suffering? Perhaps there is a greater god out there who wants nothing more than to sit back and watch as humanity wages meaningless conflict just for the amusement of a callous divine being! That’s basically the premise behind Skyward Collapse, a new turn-based strategy game from Arcen Games in which players control both sides in a battle where the hapless combatants waste their lives in perpetual war.

Skyward Collapse uses all of the basics mechanics from the strategy genre; each side has a base with a headquarters and the player builds up the bases with structures that harvest and process resources to build armies and create more elaborated structures. The key difference to this game is that players have to make sure that neither base is actually capable of winning the war. If one side actually wins, it’s game over for the player.

The Player gets points for each act of carnage, and must reach a certain number of points within a certain number of turns. This prevents players from acting like a benevolent god and just letting their minions live out their lives without trying to sack the other town. 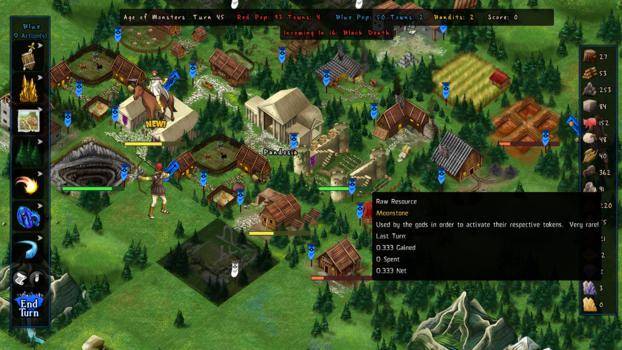 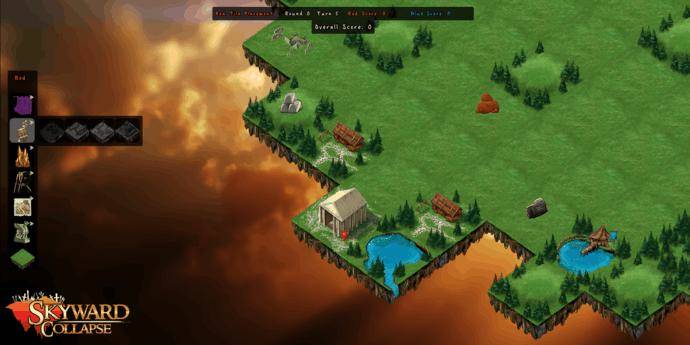 Another important difference between Skyward Collapse and other strategy games is the units have minds of their own. The player gets to build the bases and even modify the landscape, but can’t directly control any of the characters on screen. Of course, as God, the player can do all sorts of things to manipulate their unknowing thrall. Players can position desirable items around the map to ensure that units will meet in those locations, or they can also build bases and reshape terrain in such a way that a battle becomes inevitable.

Skyward Collapse uses an asymetrical design where one army is the ancient Greeks, and the other are Vikings. Each side has the same basic kinds of buildings, but they have slightly different land units and drastically different mythological creatures.

As an elder god, the player is above even Thor and Athena. These other gods will appear on the map and mostly mind their own business. However the player can spawn items that the Gods will be compelled to use, and this lets cunning players manipulate even the “All Powerful” likes of of the Asgardians and Olympians.

Each side also has a supply of mythological creatures than can be summoned. If those pesky vikings have done too good a job of sacking the Greeks, then players can just drop in a Chimera or Cerberus to even the flow of battle.

There is also a third faction on the field. These Bandits will turn up without warning and attack anyone who comes across their path. This means that players can make the Greeks and Norse team up against the Bandits, or the Bandits can be used strategically to help out the loosing side of an uneven war.

Aside from the single-player game, Skyward Collapse also has a coop multiplayer mode, and a sandbox mode where players can literally engage in endless slaughter just for the fun of it.

Skyward Collapse is one of those indie gems that takes an already popular genre and subverts it so that it becomes more than just another strategy game. Strategy fans who enjoy creating cruel worlds with lots of combat, while managing multiple bases will take a sadistic thrill from this game. It is available now from the developers website and digital distributors for PC and Mac.