I think it’s very important to start off this review of the new indie puzzle game Monochroma by highlighting that the entirety of the game is only about two hours long at most. The reason I begin with this statement is so that Monochroma is judged and reviewed for what it is: a simple, short game. This is no massive open world, this is no advanced fighting system, and there is no leveling. Monochroma is exactly what it presumes to be, a quaint and monochromatic game. Now don’t misunderstand this statement to mean that this is not a decent title, because it is. It’s just important that you understand with this indie brainteaser game that what you see is what you get.

Nowhere Studios is a very new developer, having started up in 2010. As a matter of fact, Monochroma is actually only their second published game. With that in mind, some of the shortcomings start to make a lot more sense. The project was brought to life by Steam’s Greenlight program, a community-based voting system giving life to games that may not have existed otherwise. Nowhere Studios has made it clear that they want to bring back classic game styles with new flavors, so a side-scrolling game type was a natural choice. However, due to the game’s dark and noir style as well as play with the dimensions of shadow it faced inevitable comparison to an extremely similar game called Limbo that was released in 2010 by Playdead Development. There is no shortage of similarities between these two games, so I will attempt to focus on what is different. 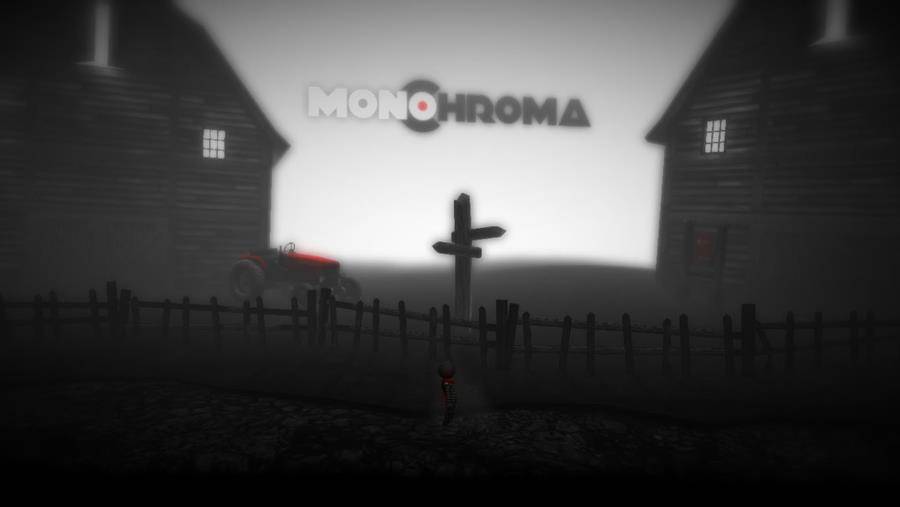 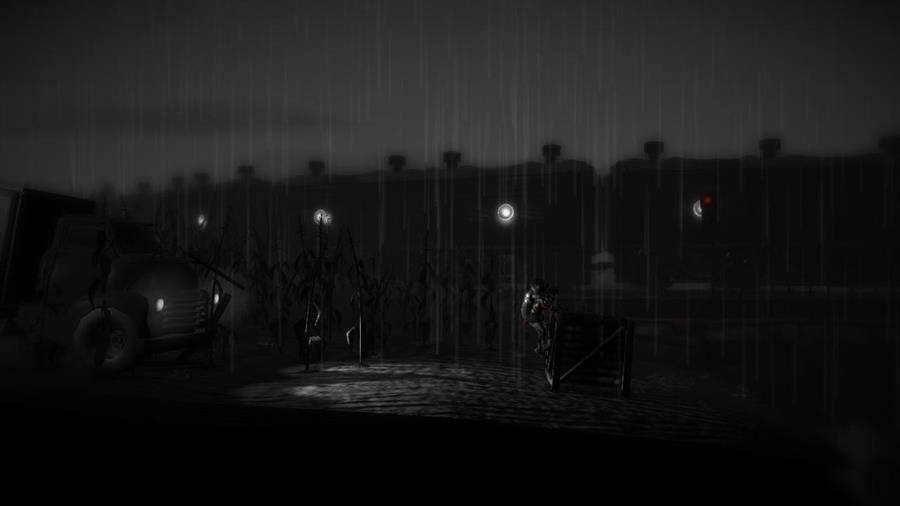 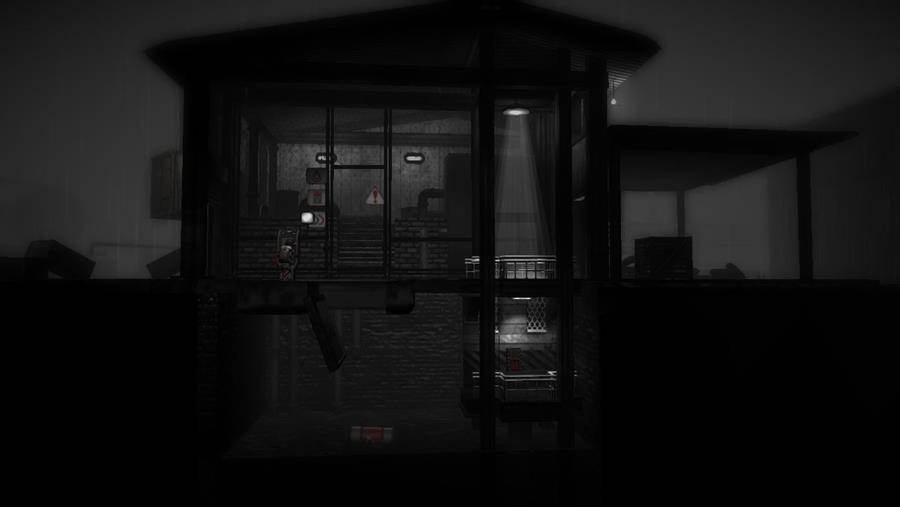 There is no doubt that it can be challenging to find much of a storyline in Monochroma, but it is there. This noir story is set in a 1950’s dystopian society where robot companions seem to have turned on us. Immediately immersed in this dark domain, we find ourselves following two young brothers trying to reach a safe destination in this highly unsafe world. There is a simplistic soundtrack that has a beautiful tone and style to it. The soft and uninterrupted patter of rain in a stormy area breathes life to the scene. As you would assume, Monochroma has an extremely modest color scheme. Everything is seen in black, grey, and white tones with important items or hits for puzzles being highlighted in red. The red is a lovely break and stands out to keep the scenes from becoming too bleak. There is no conversation and just the minimum amount of text to help you learn your controls. This adds to the melancholic feel of the world Monochroma takes place in, and keeps you from stepping too far out of the mindset Nowhere Studios wants you to be in while playing.

I think it’s very important to start off this review of the new indie puzzle game Monochroma by highlighting that the entirety of the game is only about two hours long at most.

The story finds you trying to travel to an unmentioned destination, carrying your little brother along with you. And I mean literally carrying, as you hoist your baby brother onto your back and must occasionally set him down in lit areas due to his weight affecting certain puzzles. This may not seem like much of a story, and that’s because it’s not. For the first half of Monochroma there is very little information freely given to the player about this world or your goals. If you watch your surroundings and let your imagination work you may start to see the storyline unfolding around you, but it will take some effort. Most notable is your little brother himself.  Why are you carrying him? With no explanation, this character will eventually prove to be a major annoyance in puzzle solving, but at the beginning it’s hard to care about keeping him safe. Granted, in your little brother’s defense, his burden (something that drastically departs from Limbo) does make for some added difficulty in puzzle work.

As stated above, Monochroma is first and foremost a puzzle game.  The puzzles are two dimensional stacking and jumping obstacle courses much like the side-scrolling games that have come before it. There is very little innovation in these puzzles, and quite frankly they are very easy. The only real challenge comes from the trial and error of learning how heavy you are while holding your brother or what things will catch on fire or sink in the water. However, in a short time you will realize that these puzzles are not only simple, they are actually a little dull. It gets to a point where you realize that the game is slowly pushing you through and that you are really doing very minimal work to get further in the level.

As far as added bonuses in Monochroma, they are few and far between. Achievement hunters will find themselves disappointed to discover there are only a measly five achievements to collect. One is actually given to you simply for completing the opening credits. These don’t feel like accomplishments at all and may have been better off left out completely. The only collectible is some pretty red flowers scattered throughout, but with only one direction to go it, it’s fairly easy to spot the off path they reside on.

Due to the game’s dark and noir style as well as play with shadow it faced inevitable comparison to an extremely similar game released in 2010 named Limbo.

One thing to consider here is the length and depth of this game versus its cost. On Steam, the newly released Monochroma is marked at a pricey $20. For what is offered as far as gameplay I have to admit I have a tough time recommending Monochroma at that price. Perhaps I would suggest it to a friend who I knew loved vintage side-scrolling games, or maybe one who had particularly enjoyed Limbo. But overall, I don’t think this game would appeal to enough to the general gaming community, especially at its current price. Monochroma is an interesting puzzle game that would fit in well with one’s indie game collection. However it is not a must-play, and I think that Nowhere Studios needs a bit more time to grow. Referring back to the opening of this review, Monochroma is exactly what it seems like and you should not go into it expecting more. If you like simplistic puzzle games and are looking for a game you can beat in a day, then maybe pick up a copy of Monochroma (but wait for it to go on sale).