As soon as I booted up Elder Scrolls Online (ESO) for the first time, I felt myself pulled back in to a mythical medieval world that I have come to adore. The tone, look, and sounds of ESO will fill any player with feelings of The Elder Scrolls V: Skyrim nostalgia. The Elder Scrolls Online lets the player assume the role of a soul trapped in a realm called Coldharbour that is ruled by deadric prince Molag Bal. Suddenly freed by a mysterious prophet, the player chooses to side with one of three factions in a massive war that may tear the world of Tamriel apart. ESO has done the unthinkable and attempted to combine an open world RPG with an MMO platform. A colossal undertaking, at which theyve surely succeeded.

Big Promises from a Big Name

Elder Scrolls Online was developed by ZeniMax Online Studios in cooperation with Bethesda Softworks. Bethesda is not only an extremely well known company, they are also a very successful one. So as soon as the news broke of this Elder Scrolls Universe MMO, people were immediately frothing at the mouth for more.

Instantly the tone, look, and sounds of ESO will fill any player with feelings of Skyrim nostalgia

Saying the game was over-hyped would be a ridiculous understatement, as the idea of merging a lore-filled RPG with a massive multiplayer platform was much too exciting and nerve-racking to not talk about. It was released for PC in April of this year, but will have a late 2014 release for PlayStation 4 and Xbox One platforms. Reviews for ESO from the gaming community have been hugely polarizing. Those excited about a new Elder Scrolls game have praised the lore and game play that stay true to its predecessors, while those looking for a new massively multiplayer game have shunned the game for trying too hard to remain in RPG territory.

Getting Your Feet Wet

Elder Scrolls Online begins with classic character creation true to both RPGs and MMOs, and one of the most extensive Ive ever seen. The player gets to choose body types and faces from a spectrum of Athletic, Heroic, and Soft. From that point on you get to choose hairstyles, colors, and even breasts and butt size for the women. This selection is so impressive and detailed that for a player like myself, someone who treasures crafting a character, this process can take a full hour just within itself. Immediately after character creation the player is given a basic tutorial while escaping from a prison area and emerging out in to the massive ESO world.

The visuals of ESO are just as beautiful as expected. Every flower has detail and attention paid to it, and the townsfolk are not just a generic face over and over again. Each region you visit has its own personality and tone. Not to mention ESO stays true to its day and night rotation and even adds in some appropriate weather cycles. The music creates an atmosphere so well done in this magical and medieval society that it feels like you could be walking through a scene in The Lord of the Rings. 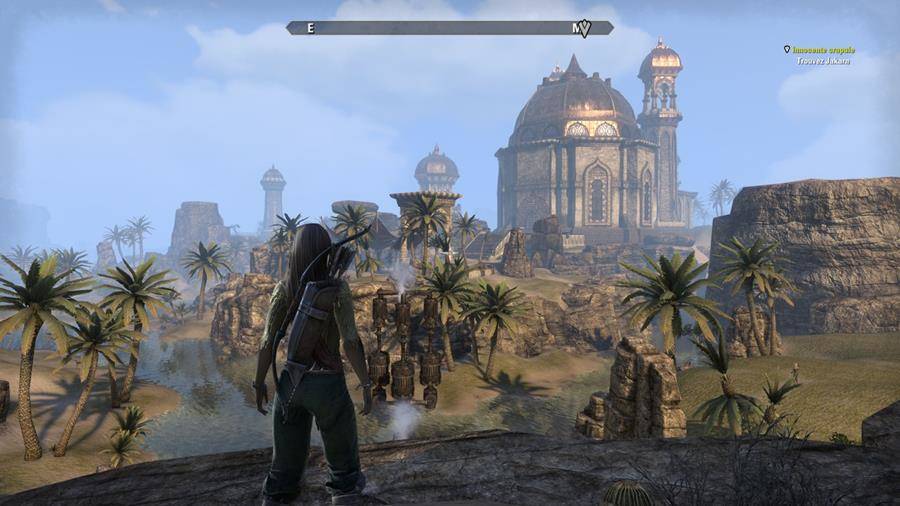 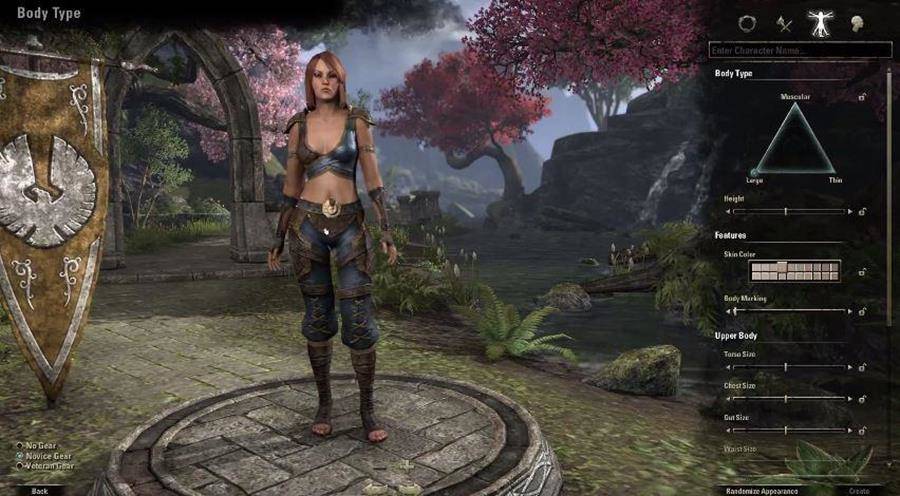 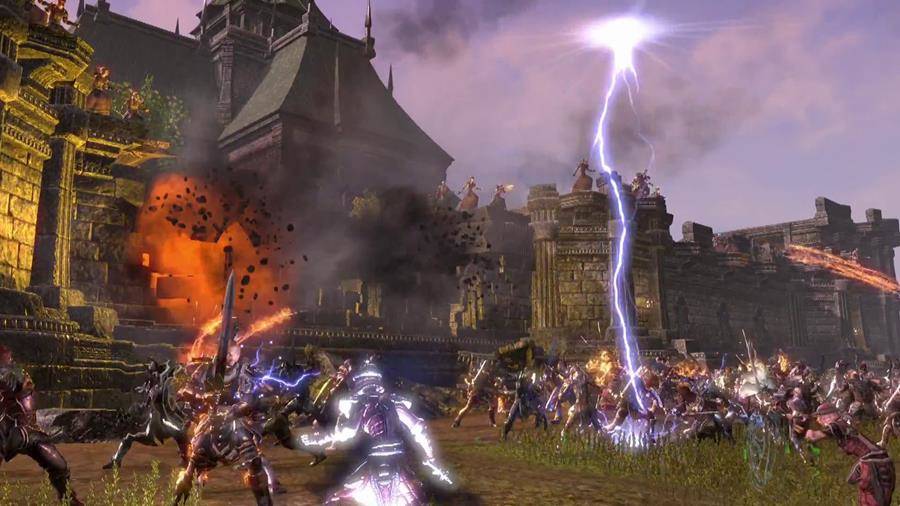 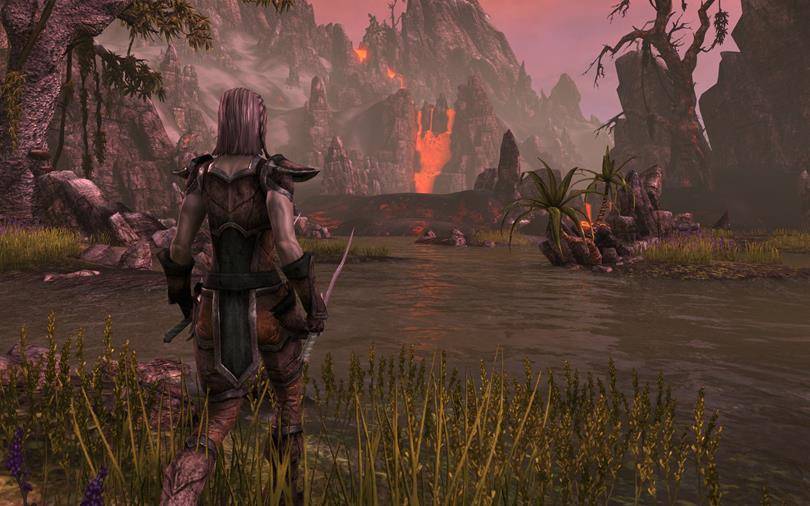 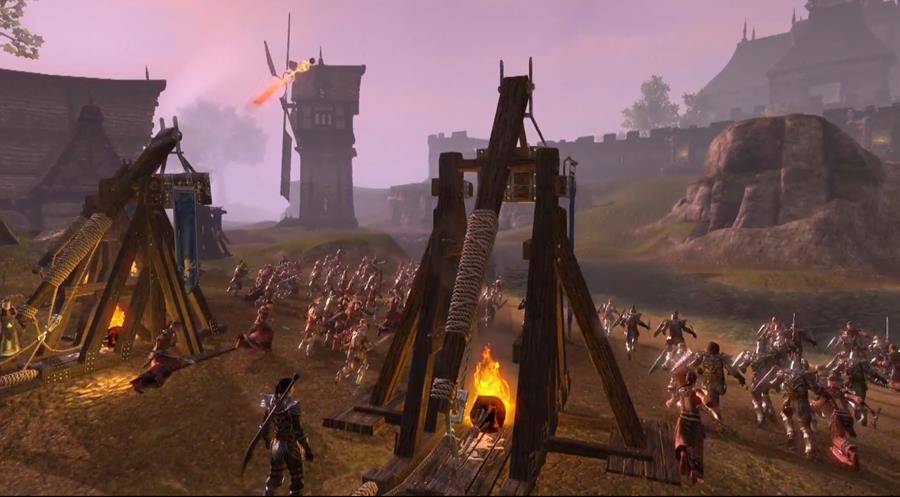 Several enjoyable aspects of previous Elder Scrolls games make it in to ESO and are noticeable early on. These include the ability to search chests, backpacks, and dead enemies for treasures that can be equipped or traded away for gold. Also making an appearance is the ability to play in both 1st person mode and 3rd person mode, something that is a nice perk usually not available in a typical MMO.

The combat in Elder Scrolls Online is a very tricky and complicated topic to cover. On the one hand, ESO attempts to improve on the combat of Skyrim (which was harshly criticized by many for being too simple and repetitive) by adding more complex attacks as well as more spells and weaponry. On the other hand, some of the same issues remain, the biggest being that no enemy faced while playing ESO has any semblance of a knockback time. While your character gets thrown a mile away or paralyzed by magic, the enemy you face seems to be able to causally run past you and power up their attacks without reacting to your combat at all. This makes many foes feel overpowered and cheap which can be hugely frustrating, especially during earlier levels.

As the player levels up, they are granted new abilities and perks to help them face more adversaries. You are allotted five slots of special abilities as well as one passive ability. Weapons dont really feel strong enough in this game and I found myself mostly relying on the same special abilities to help seal the deal in any given fight. One interesting design choice is that after the ability has been learned and leveled to a certain point it can be morphed. The player is given an option to transform the ability into one of two new and equally powerful abilities. This raises the stakes, as players will clamor to use certain spells over others in order to gain morphing capability. It also keeps gameplay from getting stale once the player has unlocked all available abilities on their character.

Ive played both the single player and multiplayer aspects of ESO and I can really see the benefits to both. Most of the time Elder Scrolls Online does tend to feel like a Skyrim expansion that can be played with friends, but honestly, to me that is the best thing about it. The benefit of having a multiplayer aspect is really just additional help in combat. However, that is not always an option since several quests take the player through time or to another dimension, and they are left to their own devices. Trading between players is also a nice aspect of the multiplayer addition, but since most quests offer the same items, playing alongside someone can be a little repetitive in that aspect.

Now here I must say something negative about this really great game. As a newly released game and as an internet-based game, Elder Scrolls Online has quite a few glitches. There are regular occurrences of the game freezing or booting you off the server with no warning. While playing with friends there were several instances where I was required to quit and restart over and over just to get on the same channel as them. The game offers the ability to fast travel to party members but often drops you miles from them and the other person must wait around for you to catch up to them. This effectively renders this once very useful ability partially pointless.

The very opposing reactions in the gaming community to Elder Scrolls Online have one very big thing in common: high expectations. Its impossible to release a game under a title this well known and successful and not expect it to be nitpicked until the end of time. But the bottom line here is that Elder Scrolls Online delivered what it promised: a fun and beautiful role-playing game that features multiplayer benefits.

I wont pretend that the game price ($59.99) and the monthly subscription required dont make for a daunting price tag. This is no cheap game. However, after playing  for only a few weeks, I already feel so immersed in this world. There is so much more to discover and enjoy, not just by myself but with friends as well. I still hold firm to the belief that Elder Scrolls Online is worth purchasing, but I think I would be as happy as the next gamer if the price were to go down in the near future. Just remember when deciding whether or not to click purchase that you are certainly going to get the quality that you pay for.