Let me start by saying that this game piqued my interest almost instantly. I saw the Steam page and trailer, and knew this was the sort of game I’d enjoy. It seemed to have everything I like in a video game. It’s an RPG with skill trees, an interesting combat system, lots of quests, and item drops. By the end of Bound by Flame, I could with all honestly say that I had played a very fun title with a lot of personality. My only real complaint is that I felt like it could have been even better. In this quest-driven third person game you play a man/woman named Vulcan, one member of a band of badass mercenaries. The biggest threat? The Ice Lords. While on a mission to try to eradicate some of these monsters, our hero faces off against an intimidating foe and earns the ability to wield new fire-related powers. As it turns out, a strange and mysterious demon has seemingly possessed your character, and from here the journey really begins.

Bound by Flame was developed by Spiders, a French developer that has been dropping a game each year consistently since 2009. They are a growing company that is trying new things and striving to create a better RPG. Bound by Flame was released just earlier this month, and usually I would wait a little while before purchasing a mostly unknown game until I hear feedback from friends and read some reviews, but something about Bound by Flame just struck a chord with me. 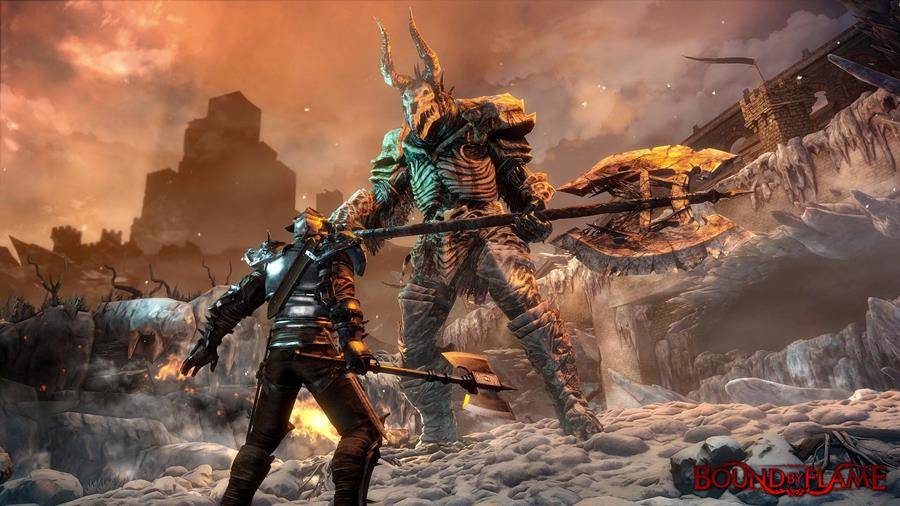 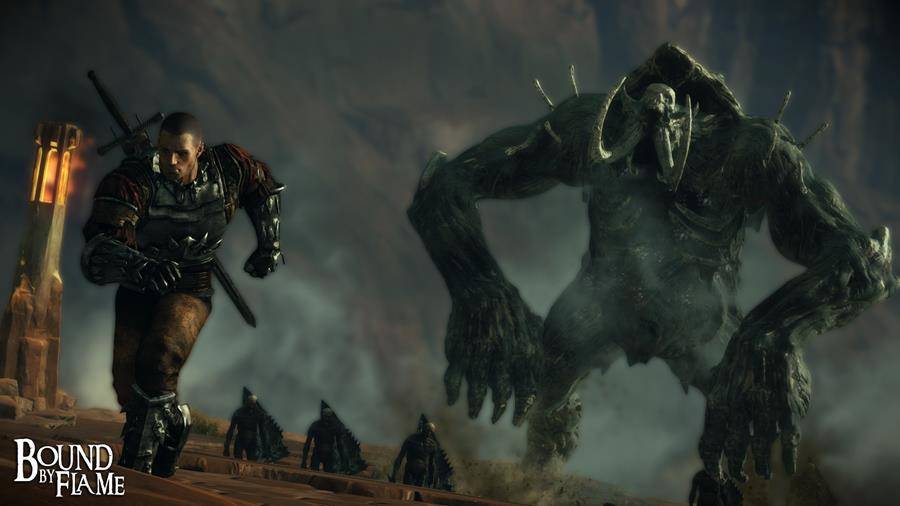 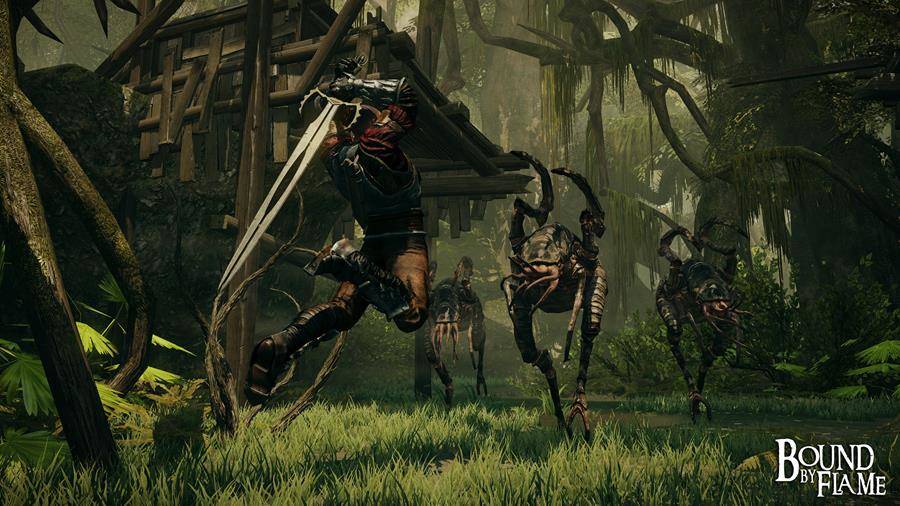 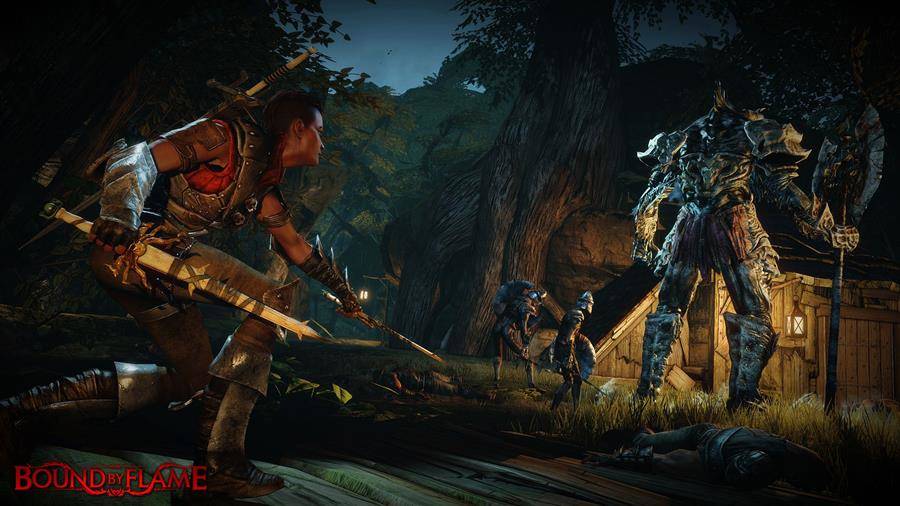 Ill be honest here, my first bit of play with this game was very disappointing. While its not for everyone, I care deeply about character customization when I play RPGs. The customization for Bound by Flame was extremely frustrating. If you’re going to play an RPG, you are embodying your character, and you need to feel like this character is an extension of yourself that allows you to be anything you want. The customization was so incredibly limited that as a female character you are offered roughly four hairstyles and three face styles.  Only having three to four options for every slot was unfulfilling.

The customization was upsetting, but I’m not one to write a game off so easily. So, I headed into the game. The first levels were very interesting as events unfold and your character gains their demonic fire abilities. These abilities are a huge asset to the game. They’re fun, interesting, challenging to work with, and they make you feel a little more special than just a freedom fighting melee tough guy. Not to mention that after a certain period of time, your powers and relationship with the demon can start to drastically change your physical appearance.

With several different companions of different skills to choose from it keeps the game from getting too stale.

That being said, combat in Bound by Flame can be hugely frustrating. Part of what makes this fighting so difficult to manage is how little the item drops help you in this game. While every enemy drops a sack of goodies and several chests exist around the level for you to gather items from, your bounty seems rather useless. Getting to a merchant is key here. Trading goods to make sure that you have all the ingredients you desire to craft things from ammunition to potions and weapon upgrades. The other aspect making the fighting such a challenge is the highly overpowered enemies. With a self-healing ability that drastically trumps your characters own, it can take far longer than is needed or appreciated to take down a larger group of enemies. Especially if you are alone.

That being said, when it comes to combat, Bound by Flame is without a doubt a companion-based game. With several different companions of different skills to choose from, this element keeps things from getting too stale. New powers, new dialogue, and new fighting combos keep things exciting. Since this game relies so heavily on a fight/fallback method of combat, having someone to cover you while you heal or to distract some of the attacks is key. There is a companion for everyone in this game; from archers to soldiers to sorceresses. While your powers are impressive, it takes time to really hone them to their best and having some extra help in the meantime goes a long way.

I would be remiss to not mention all the good that this game offers creatively. The designs of the monsters you fight are simply beautiful. Very early into the game you fight against a massive bone demon with moves like some kind of monster-sized ape, swinging his long-hanging arms and knuckles around and looming over you. He is gorgeous, and hes not the only one. Even the most basic enemies that you must fight, the default one shot monsters, are still well thought out. Skeletons, chrysalides, and liches are just a few of these very imaginative creatures.  The locations are equally as interesting and beautiful to explore, and if you are brave enough to wander off the path you will usually be rewarded. The characters are full of personality and are very unique, no generic guy face or generic girl models. Everyone feels very special and unique, though it never feels like we get too deep into their stories, which might have been a nice addition to the game.

I highly recommend this game if you're looking for a challenging new RPG and enjoy games such as Dragon Age and Skyrim as it seems to fall somewhere between the two.

Tricky combat and other small complaints aside, this game really is top shelf. A solid outing for Spider that has much more longevity than you may realize. With almost endless side quests and almost twelve hours of main storyline, this game is a beefy RPG that has a lot of staying power. Interesting companions, beautiful scenery, and terrifying monsters guarantee there is something new to see around every corner as long as you are willing to take the time to look.