With one of the funniest trailers of 2013 behind it, Leviathan: Warships was perhaps something that initially caught people off guard. Armed with an abso-boat load of terrible puns, people took to this game like a… well… a boat to water.

The downside of this was that as soon as they’d bought and downloaded their new purchase, they realized that the voice in the trailer had been just that: a voice for the trailer. The jokes had been written to lure people in, and those same people didn’t actually watch the trailer for the game they were so desperate to buy.

Inevitably, some were disappointed (and will soon be appeased with some free DLC which adds Jazz Boatman as a playable unit). Did those people overlook a golden game because it wasn’t what they expected, or did they dodge a bullet?

Leviathan: Warships is a maritime strategy game made for tablets. The latter part of that sentence is important, because it influences every single part of the Leviathan experience. They’ve still done a good job of making sure the mouse control scheme works as it should and there aren’t really any unnatural click and drag sections – as might be expected from a game made primarily for tablets – but it’s still definitely there.

With that said, it’s not exactly super intuitive either. Each unit is controlled via a number of buttons that appear when you click on that unit. You then drag to a target. It works, but I could definitely see room for improvement. This becomes more obvious as you begin to get used to the way Leviathan plays. 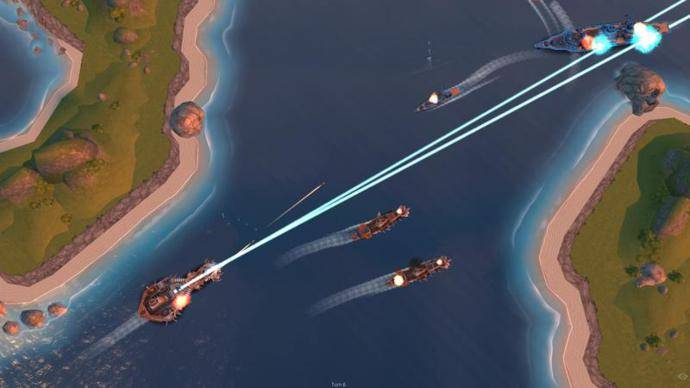 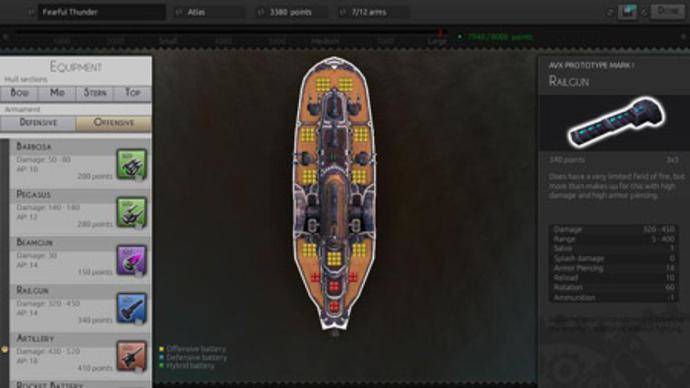 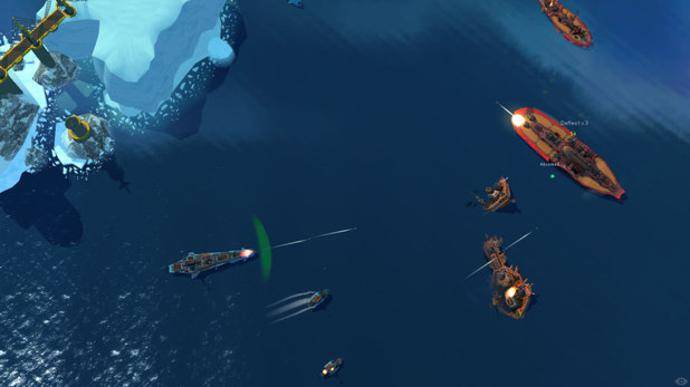 Each round is split into two, the planning phase and then the play phase. The planning phase has you setting targets for your ships, having them move or turn around. You can also set up shields or set mines, as well as one of several other special moves. Each move you make takes a specific amount of time (or has a reload/reuse refresh time), and this comes into play during the second phase.

The second phase is where all your plans come to fruition. Time begins and your boats (as well as those of the enemy) pop into life. For ten seconds, the ocean becomes alive with shells, sinking boats and underwater mines. During this period, guns and shields will reload, boats will move and then, when the ten seconds are up, it’ll all freeze again and you’ll be made to plan out your next move. An average game can repeat this upwards of thirty or forty times, and online games will be more than even that.

I say online games, but technically all games are online games. To get to the single player – which is also online – you must go into the co-op menu and set it up for only one person, which seems like the most backwards way of framing a campaign ever. Each level is set up as a match, and you can come and go to it as you please.

There is a reason for it all, of course. Using the cloud as a means of cross-compatibility, each of your matches is playable in any version of the game, on any platform (sold separately). You’d need to be a pretty big fan to buy into a single game across multiple platforms, but the basic idea is nice.

The single player campaign ranges from ridiculously easy to stupidly complicated, sometimes within a single level. This feels like it may be because you’ve set it up wrong, but there’s little feedback to correct you if that is indeed the case. Although there are times that any given situation can quickly and dangerously get out of hand, you can usually see where the threat is coming from and, with a little luck, make amends.

The single player doesn’t have much in the way of story, and is far better when played as co-op (as the menu structure hints is how it should be played), but the competitive online mode manages to struggle in other areas. While the general idea works well, it is waiting for a match that most will find unbearable. It’s not unusual to wait up to ten minutes to be placed into a game, and then that again while the lobby fills up and everybody prepares their units. The end result isn’t worth it.

Leviathan: Warships suffers from a lack of choice. On a tablet, it’ll probably be a gem in your collection, a shining, watery example of how nice bright seascapes can look on a dedicated machine. On a PC, you’re left with the very basics. Low, Medium, High and resolution; there are no options for anti-aliasing or any other post-processing, and this is a game that would have massively benefited from those options at 1080p.

Don’t get me wrong, it still looks good enough, but with a little time (and perhaps even now, with a patch), it could have been much better.

The audio on the other hand isn’t interesting enough, nor bad enough, to really register on any sort of scale. It doesn’t even really set the mood, and you’ll perhaps even struggle to remember if there IS music. The sound effects are good enough though, and considering the style of game, that’s probably the more important part of the audio design.

Leviathan: Warships is in now way a must-play title. For the right person it’ll be fun and addictive, but the right person probably has a list of games like this and they probably do much of what Leviathan offers with a higher degree of quality. As a full strategy game on tablets – something people were quite excited about when XCom was announced last month – it’ll be hard to knock, but on PC I’d only recommend if you were a definite fan of the genre or if you had more than a passing interest in the game itself. If you’re on the fence, you’re not going to find much that surpris