Euro Truck Simulator 2 puts you in the shoes, or sandals, of a wannabe trucker who wants to start their own trucking business from the ground up. You will end up buying a multitude of licensed trucks and exploring most of Europe. Along the way, you’ll be doing a lot of driving, storming through countries to get the delivery in on time.

It’s pretty obvious that this is a game that requires a lot of patience – it’s very slow paced and it can be very dull at times. If you’re not too keen on being dedicated to an individual title, then this really isn’t the convoy for you, although you might be surprised by what you find.

After setting yourself up with a profile, a company name, selecting your favoured truck design and the city you will base your company in, you’re given a tutorial. The tutorial nicely showcases a few controls of the game, showing you the various menus and how to use your truck’s GPS. That’s when you’ll be sent out on your first job. After you have completed that, you’re given a pitiful but functional garage.

You barely have anything to start with. Yes, you get a garage and a couple of thousand Euros, but that is nowhere near the required amount to buy a truck, so you will find yourself doing some quick jobs. The truck is all ready to go, the cargo is attached, just turn up and drive to the required destination. 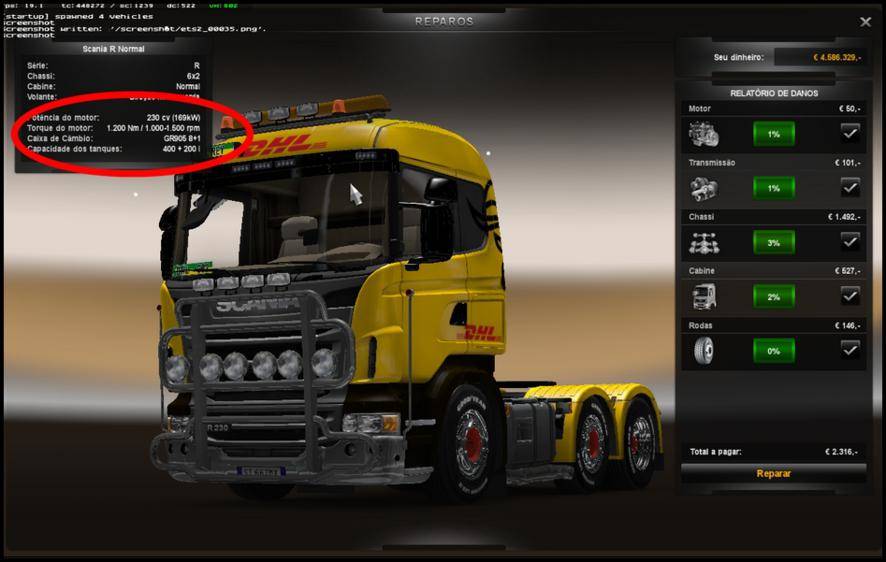 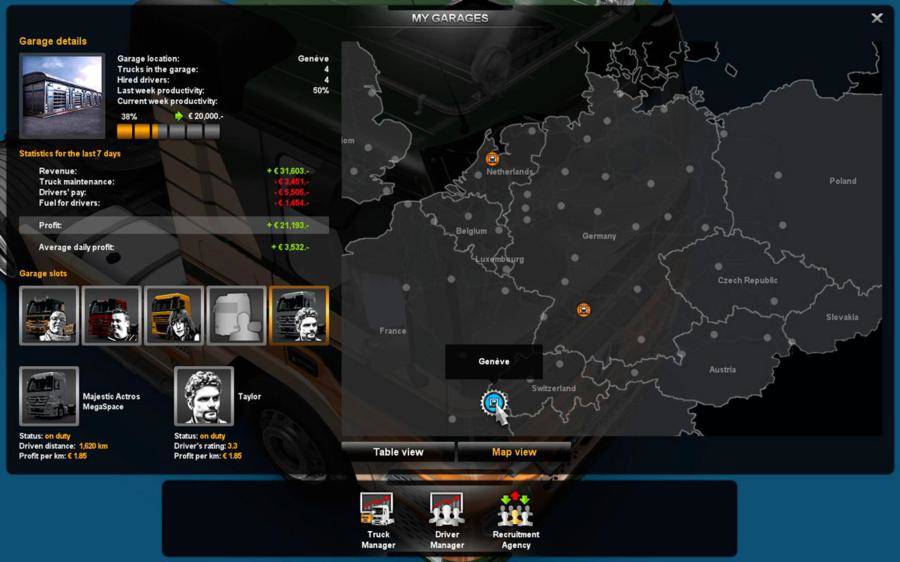 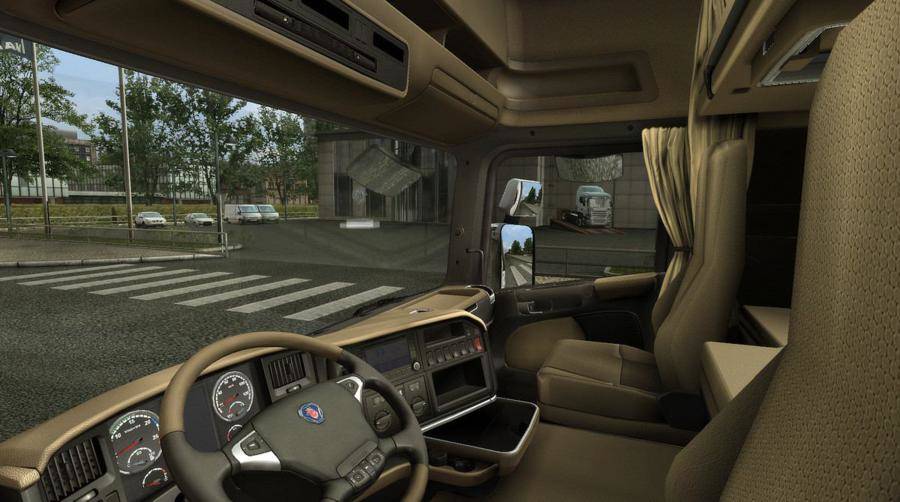 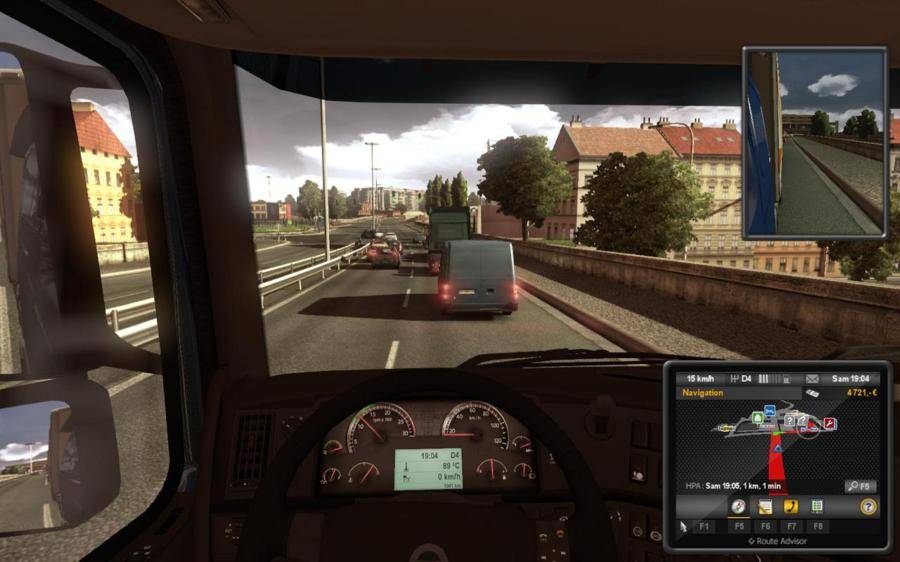 Luckily you wont have to do hundreds of quick jobs as they pay quite well and you get an email from your bank telling you that you can now take out loans. After you’ve acquired enough money to purchase your desired truck, either by doing quick jobs or taking out loans, the game can really begin.

You gradually gain experience while free roaming or doing deliveries and eventually you level up and gain skill points. You can spend the points on skills (obviously) ranging from long haul deliveries to eco driving to even delivering hazardous materials. These skills do play a part in what you will be delivering with your own equipment.

After you’ve made a tidy profit and paid back the bank, you can begin on forging your own trucking empire: start off by expanding your garage and purchasing new ones, then buying new trucks and eventually hiring drivers who will get better as they deliver more things.

You can also customize your truck. Change the paint, wheels, add front grills, change the engine of the truck and many more technical and visual upgrades. Be sure to do the same for your driver’s vehicles as well, as they will perform better with a better truck. Keep on trucking and building your empire and eventually you can call yourself the king of the road.

This is a simulator so it’s aim is to recreate driving a very heavy vehicle to a tee, and it does so. The driving is fluent, heavy loads feel like heavy loads and driving in general is enjoyable. But as nice as the driving is, there isn’t much else to the game, and it does get very repetitive – it ends up feeling like a chore (or a job!).

The laws of the road here are in full force: stay in the correct lane, keep to the speed limit, avoid crashes and don’t run red lights. If you do any of these illegal acts, you will be fined.

The AI also performs well, acting like real people would. Some will let you pass and others will speed by in an inconsiderate manner. The AI does have some short comings though. Some cars chose to overtake in ver strange places like hills and turns, but after a recent patch, it has mostly been fixed.

The gameplay just asks for multiplayer. Happily SCS software have replied and they’ve confirmed that they will be working on a multiplayer mode, but for now we have a well-made mod.

Being a simulator, this game has a plethora of modifications for it to enhance gameplay. Some add new trucks, others new things to deliver and adding new maps entirely… The modding community for this game is vast and committed. Some mods for this game rival whole pieces of DLC from the developers themselves.

This game looks stunning. From rural areas to big cities, this is a title that made my jaw drop. Who knew Cardiff could look so good? The textures are very realistic. The weather in the game looks beautiful too, from the specific drops of rain on the windscreen to the water soaked roads.

Vegetation looks great as well. Grass and trees flourish throughout the landscape, adding colour and even some character to some areas.

Trucks look great too, interiors are very well modelled and textured and the outsides of the trucks look just as good. The trailers look very nice as well, but the lack of brands is slightly distracting – get used to delivering things for Po-Seed, you’ll be seeing their trailers a lot.

The sound design for this game is is even better than the graphics. SCS software have painstakingly recorded every type of sound from every type of truck in the game. It’s not only the trucks that sound good, the environment has a vast soundscape as well. From the air rushing around the truck, other cars or even sounds of animals at farmyards, it all sounds, rather pleasant.

Euro Truck Simulator 2 is an odd case. It’s a fantastic simulator, it achieves what it wanted to to excellently but it is also, a very good game. It’s easily playable and very addicting, I found my self going for a leisurely drive around the UK, just taking in the environment.

It can get repetitive but it’s a solid game. It’s the best simulator out there.