Another day, another indie side-scrolling shooter. They seem to be a dime a dozen currently, but that’s OK since they serve a purpose – fast entertainment on the cheap.

Point 5 Projects’ Bad Bots is another 2D shooter that recently hit the scene. Like many games of its ilk, it tries to recapture old-school aesthetics by providing gamers with challenging arcade action. Bad Bots accomplishes this, but in a way that feels incomplete.

Good to be Bad

The game’s hero is Sam MacRae. He’s the lone survivor on the Titan Hauler, a vessel that has currently fallen victim to a robot uprising. It’s up to him to save the ship, and Earth, from certain disaster.

The narrative is told primarily through comic book-esque cutscenes. There’s plenty of ironic exposition, light humor and predictable plot twists as the story unfolds, and it’s mostly charming thanks in part to the nice art design. 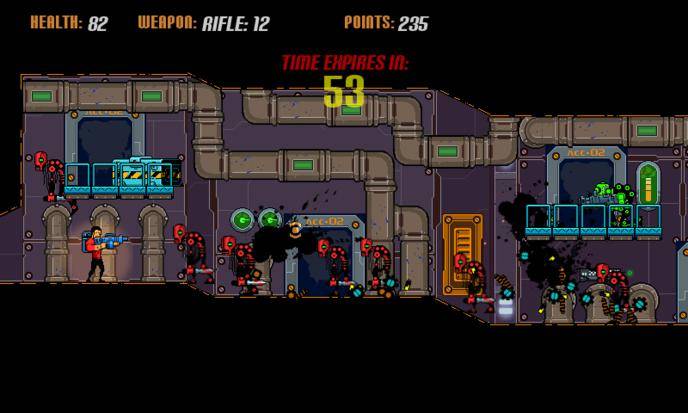 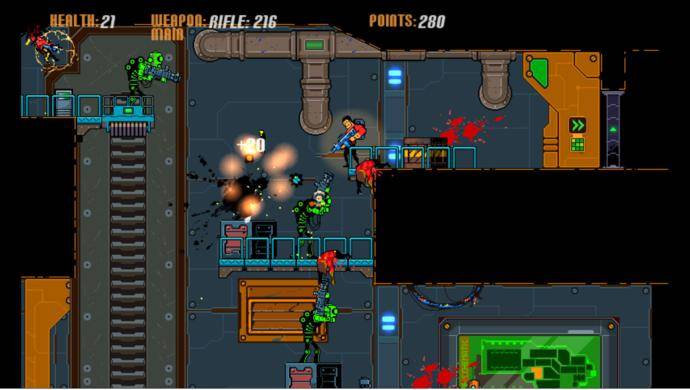 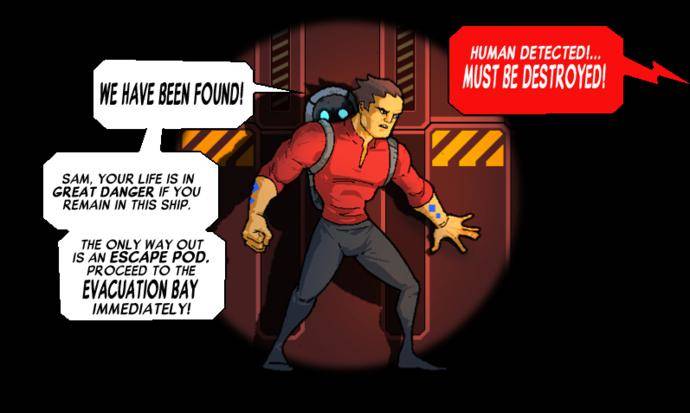 The appealing visuals and tongue-in-cheek writing doesn’t help the gameplay, however.

Consisting of around 170 rooms, the Titan Hauler makes for a decent sized playground. There are a smattering of hidden areas to find, objectives that require backtracking, a few simple puzzles to solve and tons of bots to blow up. All of this is mildly enjoyable, but there are some problems.

The first problem I ran into is the controls, which are a bit wonky. MacRae can only turn around by using the right analog stick, which is also used for aiming, and “up” is used for jumping. It took me a few minutes to get the hang of it, and when I did things ran semi-smooth, but it was still a bit cumbersome and felt stiff; mouse and keyboard made it worse.

The combat, for the most part, is fine after getting the aiming down. The primary rifle is what I used most often to destroy bots, but the special weapons, like the cannon and dual-shot, were quite useful in specific situations. The melee – an ax that later gets upgraded to a hammer – is really only good for destroying boxes, doors and one mini-boss that is immune to bullet damage.

That being said, laying waste to scores of sentient robots isn’t as fun as it should be. The gun-toting robots, which are the majority, typically don’t pose much of a threat since their bullets are pretty weak and they don’t move around often. The bots with knives are a different story, though, as they charge at MacRae in packs and often stun-lock him, making it very difficult to strategize.

Like the knife bots, some of the bosses resort to cheap tactics, as do the pesky cleaning robots that swarm MacRae and electrocute him. I dreaded walking into rooms that contained these enemies, which came at me in seemingly endless waves, causing me to frantically run and jump around the room spraying bullets in the hopes I could hold them off long enough before they caught me.

Indeed, the combat is a mixture of listless shooting and panicking. There were instances when it was fun, especially when using some of the more powerful sub-weapons, but the cheap moments and rushed finale left me feeling cold.

In Space, No One Listens to Music

If the botched action wasn’t enough, the shoddy music and effects were also lacking. When the music, another video game soundtrack channeling ’80s action sci-fi epics, decides to play, it actually sounds pretty good. However, major stretches of the game are silent, with only the lifeless sounds of bullets and annoying robotic voices to fill in the gaps.

The score isn’t even present during most of the cutscenes, which definitely makes the amusing story have less of an impact. Truly, the 90s comic book inspired art design is where Bad Bots is the most pleasing, but even it feels unpolished at times.

Bad Bots lives up to its premise for the most part, but the incompleteness of it all, and short campaign, make it lacking in key areas. Perhaps with a few tune-ups it could be worthwhile, but even then I’m not sure it would be palatable. There are some great 2D indie action games out there, but this isn’t one of them.