So it’s come to this. The likes of Farm Simulator and Euro Truck Simulator have become beyond a joke, have become mainstream and apparently deserve a parody of their own. From YouTube onwards, Surgeon Simulator 2013 is the main topic of conversation, with hundreds of thousands of videos popping up in a matter of weeks. It’s difficult, it’s wacky, but is it worth buying and will you get your money’s worth out of it if you do?

The answer depends on how far you’re willing to stretch a joke.

Surgeon Simulator 2013 is a long running joke. From the very core of its code, to references on the top menu, there’s not a single part of this game that you’re supposed to take seriously. The items available during your many surgeries range from overkill to ridiculous, and a single steady smash to the ribs can cause said bones and most of the patient’s internal organs to explode across the screen, not always causing much in the way of blood loss. Even the controls, which have you controlling individual fingers on the surgeon’s left hand, seem to parody the overly anal nature of the niche simulation genre.

Of course, it also means that it’s next to impossible to do anything. You move the hand with the mouse, lowering it and twisting it with the mouse buttons. This takes a little getting used to, but you’ll eventually get to a place where you’re merely useless, as opposed to an active threat. You’ll need to get at and replace a specific organ, and you’ll need to laser, cut and hammer your way through everything that’s in your way. Rip out lungs, smash ribs and slice veins – what’s important is that the replacement organ make it into the correct part of the body. 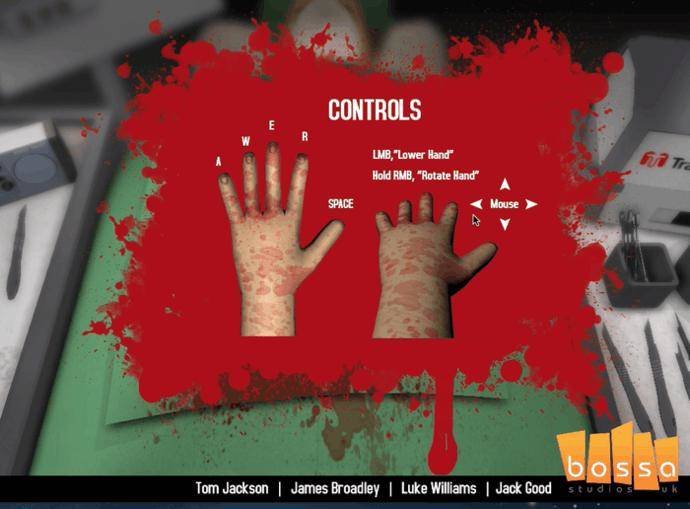 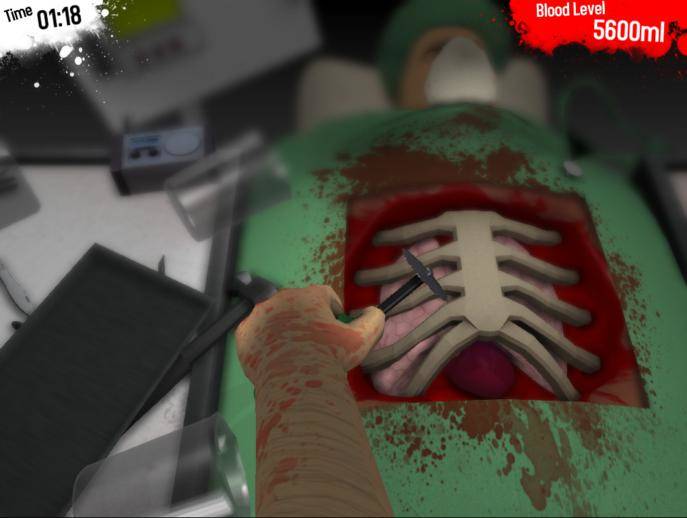 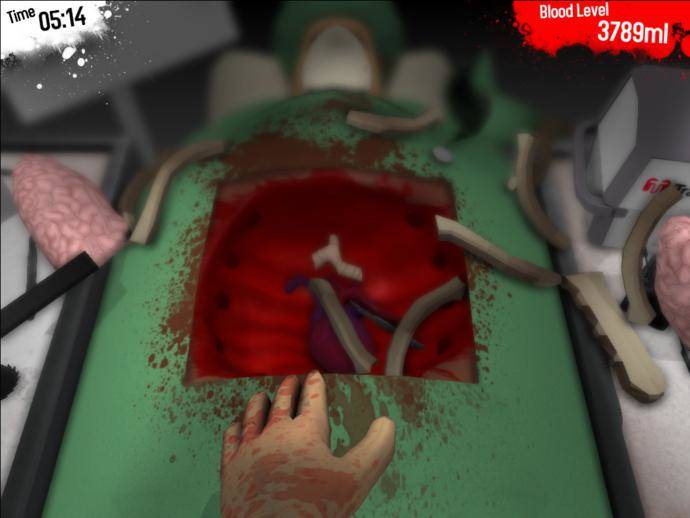 As you cut, you’ll cause the patient to bleed more and more, until eventually they’re bleed out and die. If you’re extra careful – not exactly an easy task – you’ll only make them bleed when you’re actually inside their body, but more likely than not you’ll end up cutting them which causes the blood, like a timer, to gradually count down. This increases the pressure and, in a game where you’ll struggle to even pick up the utensils needed to operate, pressure is the last thing you need.

Rinse and repeat across a number of different operations, and in a few different locations.

There’s not much in the way of audio really. An occasional squelch or splash of blood, the sound of a drill firing up or a laser burning its way through the skull of the dangerously sick Bob, plus a kind of Casualty-esque theme song that constantly plays through your operation. It’s not especially off-putting, nor is it really worth mentioning beyond the fact that it’s there.

The graphics are decent, although not much happens. The physics of the whole thing are rather interesting, if something falls and knocks something else, but beyond that, there isn’t much to look at. The odd occasion something happens is usually either a glitch – such as something randomly sticking to your arm or an organ moving around inside the patient – or ugly and unnatural, like a blood spurt. The base elements are fine, anything beyond that is pretty disappointing, but it all adds to the joke.

How far are you willing to take a joke? If you have a YouTube channel or are an active member on Reddit or 4Chan, Surgeon Simulator 2013 is a must-have. Then again, those communities are pretty well known for their ability to beat a dead horse. The fact of the matter is, this isn’t a game as such, no more than QWOP was an actual game. There are no objectives as such, none that really matter anyway. Instead, the whole thing is an exercise in silliness, which in and of itself isn’t necessarily a bad thing. But how much is being silly, probably on your own, actually worth to you?