South Park The Stick of Truth

There have been a lot of South Park games over the last two decades and they’ve all be leading up to The Stick of Truth. Never before has there been a game that so accurately captures the show, both in construction, visuals and attitude. It’s been a long time since we were fighting killer turkeys with snowballs, or answering questions with Chef, but those of us who’ve been burned before definitely need to take a second look.

There aren’t many shows that look as bad as South Park, especially in those early series. There’s a crappiness that makes it stand out amongst its peers, but there’s also quite a beautiful simplicity, and an extra edge that adds to the humour. This has been difficult to capture in the past, but Obsidian have managed it. Stick of Truth looks like an episode from the show – it can’t be overstated. Moving from cutscene to exploration is flawless. It sometimes feels like an interactive episode.

Stick of Truth is also incredibly hilarious. They've managed to make a game that's both self-referential - there's plenty to see for fans of the show - but also quite up to date with trends

It helps that the dialogue and voice work has been written and performed by the people behind the show. Interacting with a wide cast of redneck crazies and small town hicks (as well as Cartman’s Mom, who’s very welcoming) has never been this enjoyable or instantly recognisable. There’s a few too many occasions where you’ll hear repeated lines, but you have to appreciate the overall effort nonetheless.

Stick of Truth is also incredibly hilarious. They’ve managed to make a game that’s both self-referential – there’s plenty to see for fans of the show – but also quite up to date with trends. Sometimes this is combined, bringing back references to World of Warcraft and Facebook. Twitter and Apple get a mention as well. There’s not been this level of real-world reference in a game, ever, and it makes sense that it’s South Park that’s doing it.

It wouldn’t be a good representation of the show without it being larger-than-life though, and Stick of Truth really delivers.

The New Kid in Town

You play as the new kid in town. Nobody knows his name or where he comes from, and your parents are glad you get to start a new life in a quiet mountain town. On your first day, you go out to meet the local kids and are brought into a war between human and elves over a mystic relic known as the Stick of Truth. With the help of Butters and Princess Kenny, you must round up the last bastion of mankind for a battle that’ll take you from sleepy Colorado, around the world and beyond.

Your character is basically mute, although this is heavily referenced within the game. In fact, everything is heavily referenced in the game. Every overused design decision is made light of, and usually this works. There’s an occasional bit where the game is aware of something boring or annoying that it’s doing, and yet it does it anyway. No amount of pointing out a flaw is going to make that flaw not exist. 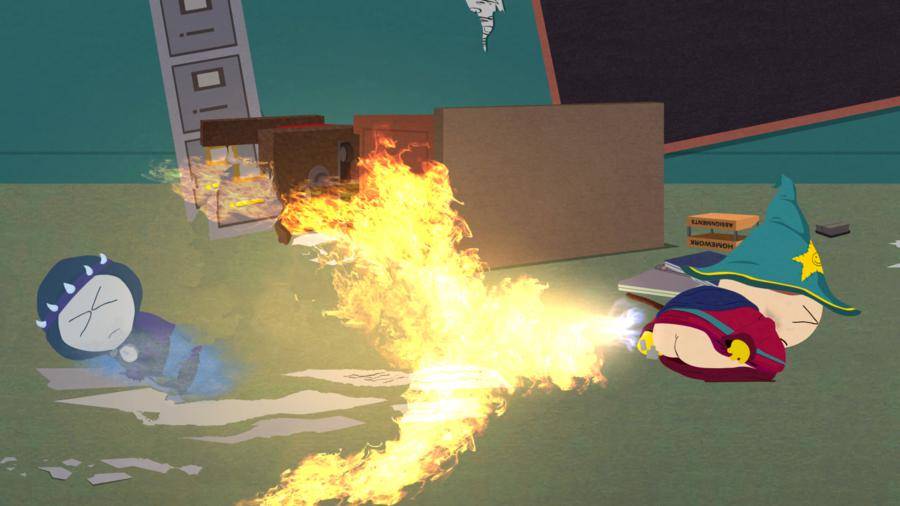 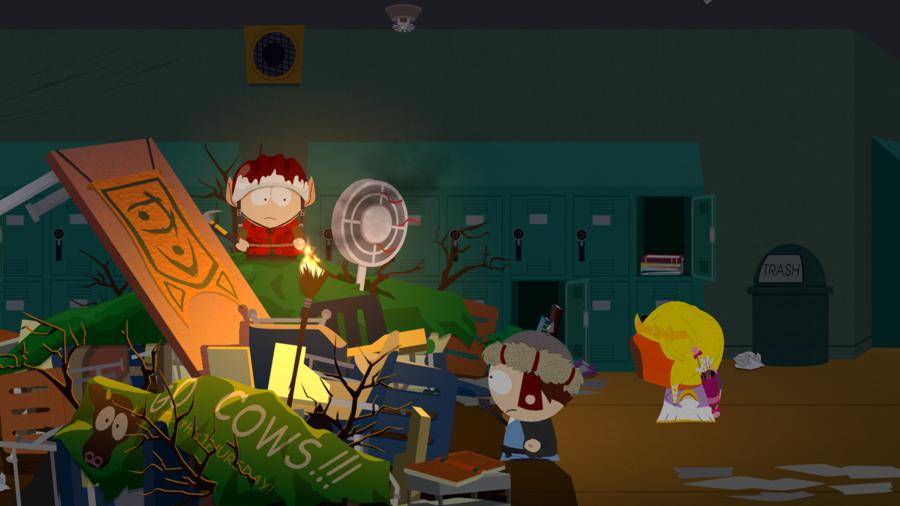 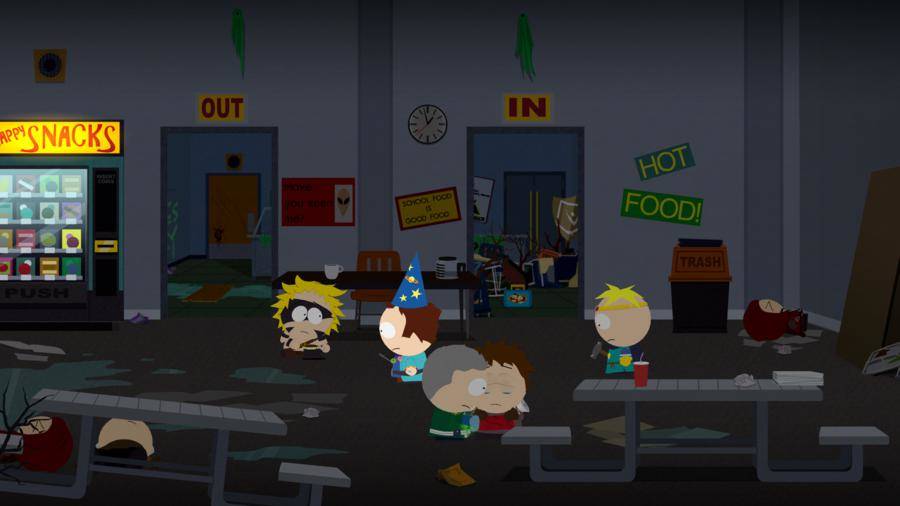 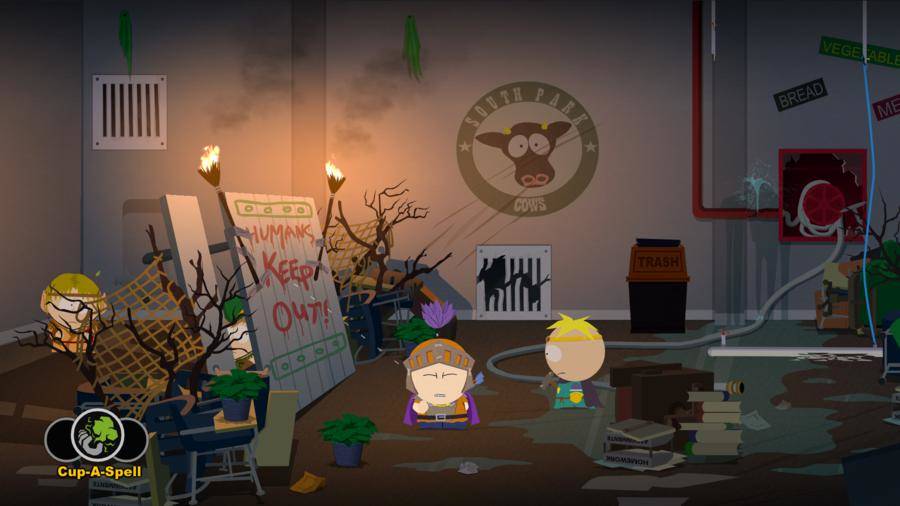 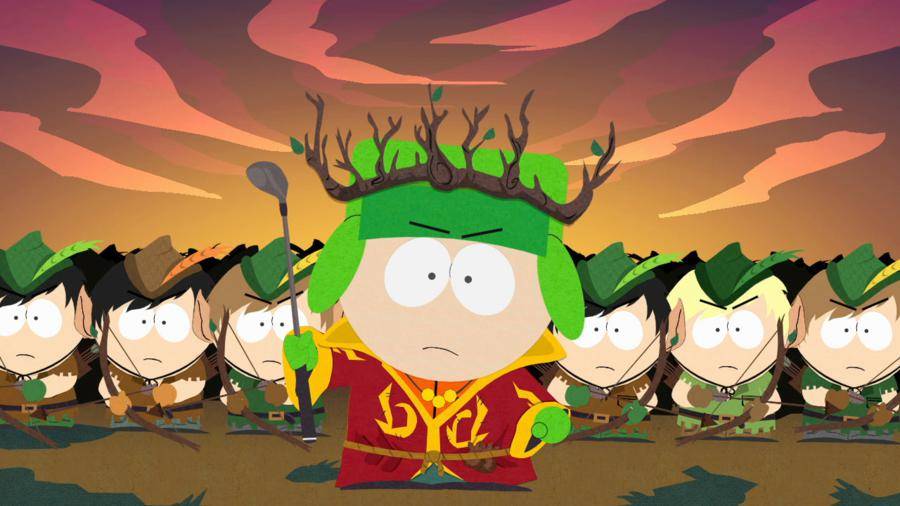 Thankfully that’s rare, and the gameplay itself is actually fairly original. There are basically two states of play: exploration and battle. Exploration has you visiting the various locations of South Park, interacting with characters and completing quests. This works much as it would in any other game, only you have to collect an iPad 2 instead of a mysterious relic, or catch rare animals instead of fantastic beasts. Story quests tend to be a bit more involved, and will have you interacting with familiar characters or exploring multiple iconic locations.

Combat is turn-based (“Like in the middle ages. It sucks, but that’s how they used to do it.”). You’ll use a variety of awesome weapons, like sticks, faeces, alien rayguns, crutches and hammers to batter other children, hobos, drug addicts and gingers. When you’ve chosen how and whom you’ll attack, you’ll press the right button at the right time to splinter off into other moves, or to add a bonus. It’s quite easy to get the hang of and allows for an unexpected, if sometimes hard-to-remember depth.

Stick of Truth will tickle your funny bone and tighten your sphincter. Buy it today

As you’d expect from Obsidian, there’s a lot of customization options. This ranges from weapons and equipment, to “strap-ons” you can use to customize them. There’s a lot of clothing and visual stuff to collect as well. Some might not be happy to hear you can’t select a female character from the get-go, but there are things you can do to change that as you progress.

So, in the end, it’s a regular RPG in many ways. There’s lots to explore, loot to collect, farts to fling… no? Stick of Truth’s magic system is based entirely around flatulence, and you can even use your ass to solve out-of-combat problems as well. It’s… exactly as it sounds, but it manages to be funny regardless. Just remember the golden rule – never fart on a man’s balls.

You can even gain a collection of summons. The people of South Park – including Jesus – are only happy enough to repay their debts. So speak to everybody, get them on your side, and unleash them in battle.

There are a few technical issues that are definitely worth mentioning. Loading screens on PC go by super-fast, especially if you have a decent rig. This, outside of being able to play at 1080p, is perhaps the only advantage the PC version of the game has over the console iteration. There aren’t any graphical options, and there are still occasional bouts of slowdown and sound distortion.

None of this should really bother you, as it doesn’t happen often enough to be annoying. The only other thing which’ll cause any cause for concern is the out-of-engine cutscenes, which usually involve something epic, but which don’t quite capture the South Park look. Instead, it just looks like bad CGI.

Stick of Truth isn’t for everybody. If you’re a ginger kid, a goth, a security guard or an alien lifeform, you probably need not come on down to South Park. It’s also been made primarily for fans of the show, and the nature of the jokes probably mean Stick of Truth will be dated in 18 months time. If you love Cartman, Stan, Kyle, Kenny and co and are on fence about another bad tie-in, don’t hesitate. Stick of Truth will tickle your funny bone and tighten your sphincter. Buy it today.