Masters of the World Review

Masters of the World

If you’ve ever looked through the papers, hoping to find a shred of explanation as to why politicians act the way they do, knowing full well that you could do a far better job, Masters of the World is for you. It’s the third in Eversim’s geo-political simulator series, and while other games task you with ruling the world or coming to an uneasy peace with every other nation, in Masters of the World you’ll make difficult decisions, work to jumpstart the economy and still struggle to get into the people’s good books.

Forget Civilization; if you truly want to rule a nation Masters of the World will have you biting your nails down to the last vote.

Deep political simulators are in a niche, and there’s a good reason for that. Masters of the World just wouldn’t appeal to the same sort of people who like the broad strokes, research trees and complete control of less specialized world simulators. You need a special sort of attention to detail, a patience while you watch world events unfold… There will be people who rush into policy changes and are booted out of office within a month. Then you’ll try again, and you’ll last a little longer. Before you know it, you’ll have gradually gotten used to the pace at which you can do things, and how far you can stretch your popularity before the country turns on you. 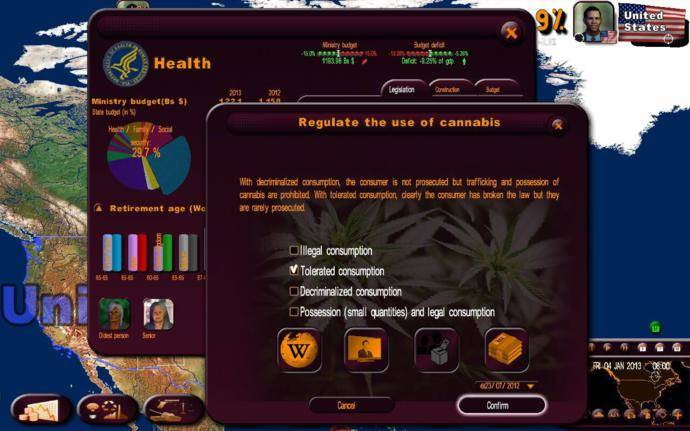 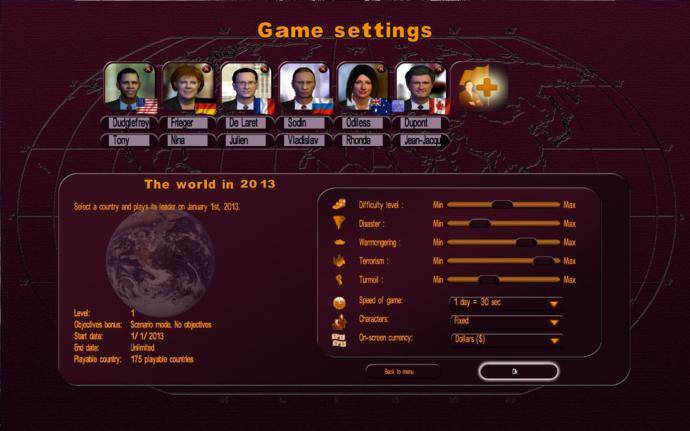 Masters of the World has a tutorial, but it doesn’t explain things especially well. You’ll get a basic understanding of what needs to happen and when, but the real education will come from actually playing your first scenario. There are quite a few scenarios to choose from, all of which have you working towards a specific objective. The “sandbox” scenario is definitely the most fun, but the other scenarios are nice for more diehard sim fans. You can pick to lead dozens of countries from around the world in various religious, economic and political states. Your people will also have different expectations of you, and pleasing everyone while keeping the economic balance will be near impossible.

Most of the game takes place across a variety of menus, from which you can choose to issue a vote on new laws or change what’s in the budget. Along the way, advisers,  opponents, friends and family will all offer you advice, but all will deliver it as if it’s the only way the country can possible survive. The ultimate choice is down to you. Although spending your time looking at pie charts and looking at statistics on unemployment and GDP sounds a little static, you gain almost instant feedback on your decisions, to the point where you’ll almost hesitate before you suggest a change to taxation rates.

You won’t just be looking after the benefits, jobs and lives of your own people, you’ll need to have a strong foreign policy as well. Whether that means sending aid to a country in trouble or closing your borders to immigration, everything you do on a global scale will reflect on you. Attacking a country might seem like your only option, but it’s bound to reflect poorly on you if your own people don’t agree. Worse, if the country you’re attacking has an alliance with a bigger country, your attack may backfire.

You’ll have to meet with other people all around the world, either to advise them, to make them see your point of view, to bribe them or sell them some service or produce of your country. Having your spies dig up information about the people you’re going to see gives you an edge, and if they still remain a thorn in your side, you can have them assassinated. Just cross your fingers that it never comes out.

In a lot of ways, Masters of the World is the absolute best game of its kind, but prolonged play will see you exposed to problems that are just going to annoy. Your friends and acquaintances are often identical, regardless of where you come from, and they often offer you the same advice. Sometimes the game will just go a little crazy on you and you’ll suddenly find yourself voting on whether Canada or Italy should be invaded as a threat to international peace. Worse is how easy it is for warfare to go wrong. I invaded Syria, with the support of my allies and my people, only to have Cyprus go to war with me (because my soldiers were too close to their borders). For that, my people and allies abandoned me one by one, and I was killed in a bombing on Downing Street.

All this happened over the space of a few minutes, and with a 100% approval rating and no real war beforehand (I pulled the troops out of Afghanistan straight away), things shouldn’t happen so suddenly.

It’s easy to put up with some minor inconveniences though, especially as you dig deeper and explore the games’ features from other the eyes of another country. Whether for educational purposes or because you’re a huge fan of simulations, this is about as close to being the leader of a global superpower as most of us are going to come, and, 96% of the time, it handles that perfectly.

Considering how much work Eversim must have put into the actual simulation part of the game, the graphics are pretty good. The world looks nice enough, especially as you zoom in, and people rarely look too misshapen or grotesque. You’re not looking at something on an AAA scale – the sweeping hills of Total War, for instance – but if you’re expecting that, you’re looking at the wrong game.

The menus might have been laid out a little better. As it is, it can be difficult to find exactly what you want. With time and a little practise, you’ll overcome this barrier.

The voice acting in this game is absolutely hilarious, thanks in part to the perhaps-intentionally-bad script. The man who suggests you legalize marijuana will totally put you off ever even thinking of it, and I’m certain several of the women are actually men putting on a voice. Again, this is an indie game and I’m sure the majority of the work went into the actual simulation, but the efforts towards the audio will definitely be appreciated, even if not for the right reasons.

With the modding tool coming out over the next few months, and a rich, deep game guaranteed to give the right sort of person hundreds of hours of entertainment, the quite high cost of entry will be justified by anybody who loves realistic global simulation games. Eversim have done a great job of giving you the power to do pretty much whatever you want, but have made sure “the people” are ready to pull you back in if you try to abuse things.

The odd glitch or mistake is easily ignored (and will hopefully be patched), and I don’t think someone who’s just paid $50 to painstakingly fix the economy is going to worry too much if the odd face or line makes them chortle.