The Cave brings together Monkey Island alumni Tim Schaefer and Ron Gilbert for a brand new adventure game unlike anything you’re likely to have played before. Pick from a cast of seven characters and explore a dark cave where anything is possible, where your character’s traits are tested over and over again. With the hilarious writing and critical thinking that made the genre great in the nineties, The Cave is a nostalgic look back at a time when games were more about character than interactivity. This is its biggest asset, but it’s also its biggest fault.

If you’ve ever played a point and click game – and if you’re over a certain age, it’s almost certain that you have – you’ll know exactly where you are with The Cave. There are some major changes, mostly to make it more accessible on consoles and to a modern audience, but the basic formula is still there. You’ll pick up items, use them on other items, perform menial tasks for characters that are – at best – horribly self-centred and then you’ll progress to a new area, where you’ll do more of the same. Hilarious dialogue, unique locations and moments where you’ll need a thinking cap are par for the course, and all make a welcome return.

The game begins by having you pick three characters from a group of seven. Each character has a different power and each has their own reason to want to enter the cave. Depending which characters you choose, things will be different in the cave and this adds a nice slice of replayability. The humour is present right from the get go (within the first two or three lines, in fact) and you’ll be chuckling away constantly. If you loved the humour in the Monkey Island series, play The Cave. For those of you who love to laugh, the gameplay is almost irrelevant and the jokes will justify your purchase. 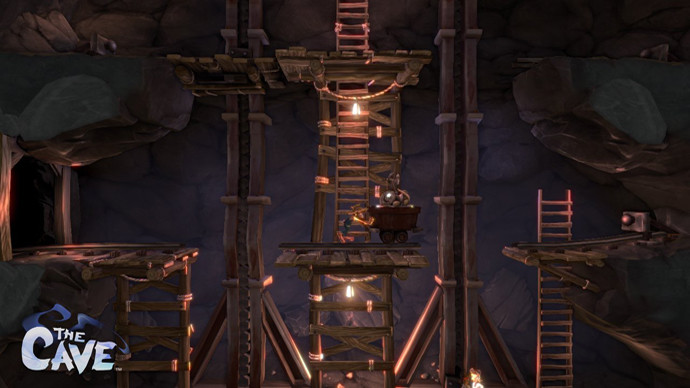 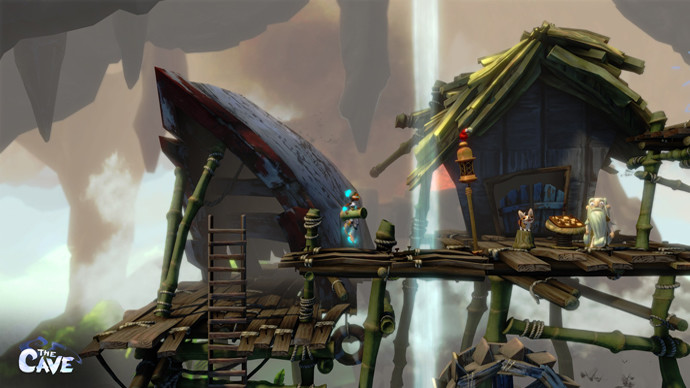 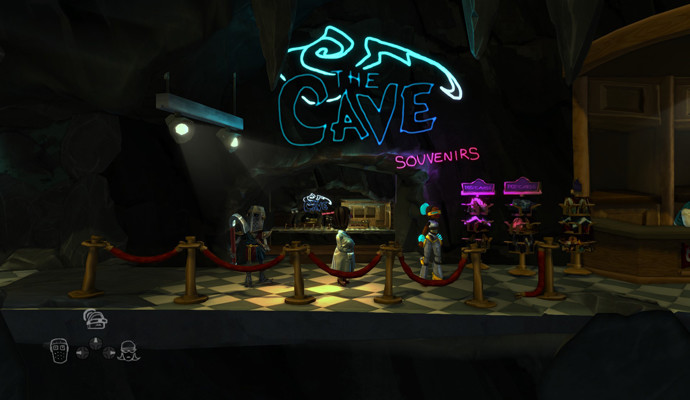 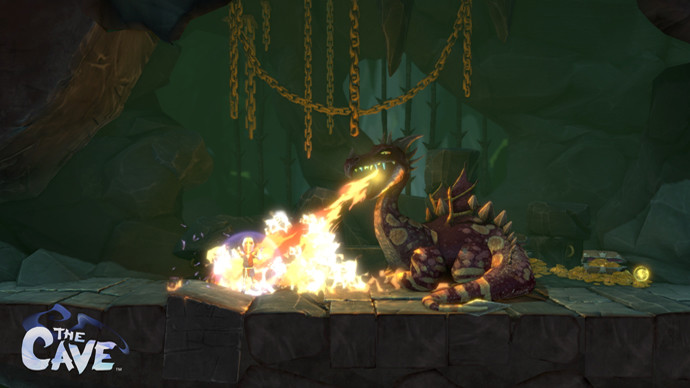 When you have picked your characters, you’ll need to get a feel for the controls. Moving your characters feels very console-y, even when using a mouse and keyboard (although the 360 remote is compatible in the PC version). Characters move across the 2D plain very smoothly (unlike the jittery intermittent clicks you’d have to make in games like Discworld), although interaction with objects is often limited to clicking them and seeing what they do. Gone are the descriptions of mundane objects, gone are the never-ending inventories and gone are the multiple conversation options that could lead off on so many unexpected tangents.

Text pops up over a usable object, and you can only pick up one thing at a time. This means that almost from the beginning you’ll find yourself trekking from one side of a location to the other just to try things. This is no different than the point and click classics, but it feels less fresh in 2013. In fact, that’s perhaps The Cave’s biggest fault – it’s fixed so many things that could feel tired in this generation of gaming except for the nature of the genre itself. This is made more frustrating by the fact that you have three characters to control and that sometimes you’ll need to guide all of them across the map and back. It might only take a few minutes, but it happens enough that it slowly starts to build up.

For many gamers, the slow nature of the game will be massively off-putting. There aren’t action sequences, there aren’t long, explosion-heavy cutscenes or deep character development. Even those present for the best of LucasArts might find their patience tested without the heavy influence of nostalgia. If you can bite your lip and remember how it used to be, you’ll probably get exactly what you’re expecting and you’ll love every minute of it. It’s been made with people that can’t perhaps get used to quick paced shooters and it’s amazing how much the developers have been able to do with that as a barrier.

Perhaps the biggest issue with the point and click genre (at least, the biggest issue we saw at the time) was its lack of replayability. The Cave fixes this by having multiple characters (and different stories for each), but also by having different collectables. The main characters are all silent, but their backstories are told through a series of images. To get them all, you’ll need to do extra puzzles and enter different areas, but the artwork is nicely done and very often both funny and revealing.

The adventure genre still has a place in today’s gaming world, and The Cave proves that, with a little work, the gameplay can be made to feel shiny and new again. It perhaps didn’t go far enough in modernizing things, but what it lacks in pace it gains in accessibility.

If you enjoyed the graphics for the HD Special Editions of Monkey Island, you’ll love the graphics for The Cave. There’s been a real effort in bringing this cartoon world to life and it has so much charm it’s almost impossible not to fall in love with the visuals. Although the name implies very little variety, The Cave offers lots of different locales and each is wonderfully realized.

The level design is less impressive and some will find exploring is overly boring. Perhaps with a shortcut system or even a map to help keep track of visited locations, this would have been overcome, but the cave is long and mysterious, and the player is as likely to get lost as they are to find all the answers.

The voice acting in The Cave is top notch, delivering the incredibly well-written lines to perfection. It’s all very deadpan – just as you’d expect from Double Fine, Tim Schaefer and Ron Gilbert – and easily rivals the minor characters found in games like Monkey Island. A special mention should be made of Stephen Stanton, who plays the cave (“Yes, a talking cave”). Every line is a joy and he kept me coming back for more.

The Cave has received mixed reviews and I can understand why. The developers had a difficult job of turning a dead genre into something new without losing any of the charm of those classic games. They managed it; although not without the occasional fault. It’s a little slow for modern tastes, but it’s also very clever, very funny and infinitely playable. Buy The Cave now, buy The Cave when it’s cheap – just buy it. It’s worth every penny.