Shootmania Storm was announced at E3 last year and then was instantly forgotten. Lost amongst talk of Assassin’s Creed 3 and Watch_Dogs, Shootmania didn’t seem to offer an awful lot. A short match between two teams of pro-gamers did little to glue it into the minds of gamers, especially those not interested in yet another shooter. The beta shortly after displayed a game that was utterly unique but without enough depth to keep your mind from wondering back to your comfort title.

Although Shootmania is still technically in beta, it opened to everybody a few weeks ago. You can download it for free from ManiaPlanet.

Shootmania Storm is almost certainly trying to fill a niche of the FPS genre that has been largely ignored this last generation. The arcade shooter most of us will have grown up with – once defined by the likes of Quake, Golden Eye and Perfect Dark – has been replaced by the like of Call of Duty, which is fine, but people looking for something a little less involved don’t really have anywhere to go. Shootmania lets you battle it out against a large team of opponents without having to worry about weapon combos, perks or even, for the most part, cover. 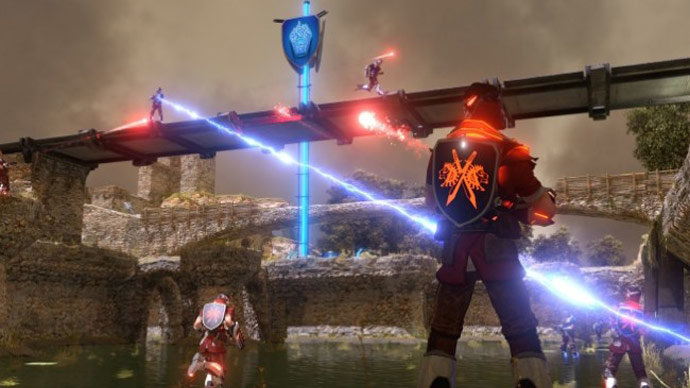 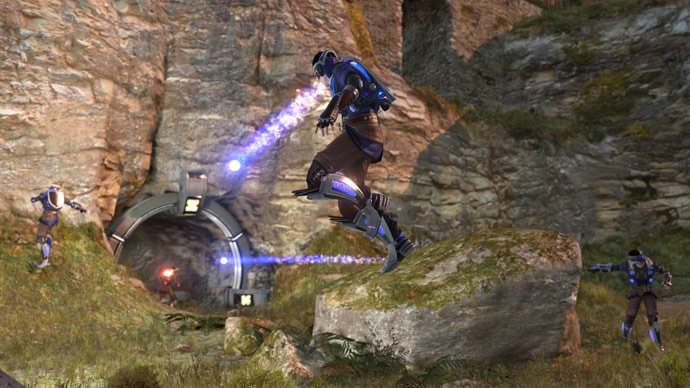 Ubisoft are almost certainly attempting to simplify a massively over-convoluted corner of the gaming world. Each player has two lives and can shoot four bullets before having to wait for them to recharge. A bullet that connects will remove one life. If you can’t get it together after that, you’ll die and be forced to respawn. It’s a really nice, simple set-up; clearly laid out and without any complication.

The controls are as simple as the rules. Move with WASD, jump with space and aim/shoot with the mouse. If you’ve ever played a shooter on PC, you’ll be ready to get right into the action. Veterans of older games will love how light the jump is, giving you the ability to cross huge chasms in a single bound. Younger people may find the lack of customisation off-putting, will be instantly at home with how to attack.

Maps are large enough to encompass the two teams, but not so big that you ever feel a million miles away from an enemy. An electric “energy” closes in on the map as more and more people die for good (you don’t get unlimited respawns), ensuring that the final showdown is tense and a blast to watch.

In fact, almost every fight in Shootmania is tense. It becomes less about how well you can shoot and more about how well you can dodge and fire at the same time. It can be a little like patting your head and rubbing your stomach, but anybody with the skill to pull it off will find themselves racing to the top of the leaderboards in each match. Jumping behind the occasional piece of cover or trying to predict the enemy’s movements is your only defence, outwitting your opponent your only offence. It’s very smooth and undeniably exciting.

It’s stays exciting as well; if you love Shootmania you’ll undoubtedly find tens of hours of entertainment in its unparalleled gameplay. Maybe you’ll join a clan or start out on the pro-gaming circuit Ubisoft want to build up around this game. Eventually though, and it might be sooner rather than later, you’ll start to grow tired. Although Shootmania has the potential for a huge variety of maps and different situations within a match, there’ll come a time when you feel enough is enough. There’s variety, but not enough that somebody on the fence about how much they’re enjoying their time playing this game will feel they’re missing out on anything.

This is Shootmania’s biggest flaw. In the space of a couple of matches you might start to feel fatigued. There’s no single player game, no real sense of progression when you win. What you play in your first game will likely be what you play in your last game. Obviously this will vary from person to person, but an average person might find their mileage to be a little on the low side (especially when the beta ends and you have to pay for access).

Shootmania Storm has adopted a clean, pleasant style that will look fantastic in 1080p and at 60FPS, but that will look more than passable on older systems as well. It won’t take an awful lot of resources to get it up to its best and when it’s there, there’s little to complain about.

The level design is the main problem for this game, visually. There are quite a few maps and each have distinguishing features, but they’re not different enough that they’ll stick in your mind. Sometimes you’ll open a map and see something completely original, other times you’ll quite literally be asking yourself whether you’ve seen a level before. It’s a real mixed bag and something I can only see becoming more of an issue as new maps are added.

There isn’t really much in the way of audio for Shootmania Storm – sound effects mostly. There’s a definite retro sense to the audio that is there though – especially in the “laser” sound that plays when you fire your gun (it sounds like something out of Timesplitters).

I began to question how little there was, but I can’t suggest any way to improve it. In this case, less is better.

Shootmania Storm is a great title with the potential to be hugely successful, especially since it’s the only game to simplify the FPS genre – rather than complicate it – in years. It’s easy to pick up and learn, but it’s also just very fun, and sometimes that’s all that matters. Unfortunately, the simplicity ends up meaning you see everything much too early and some people might find the lack of reward off-putting.